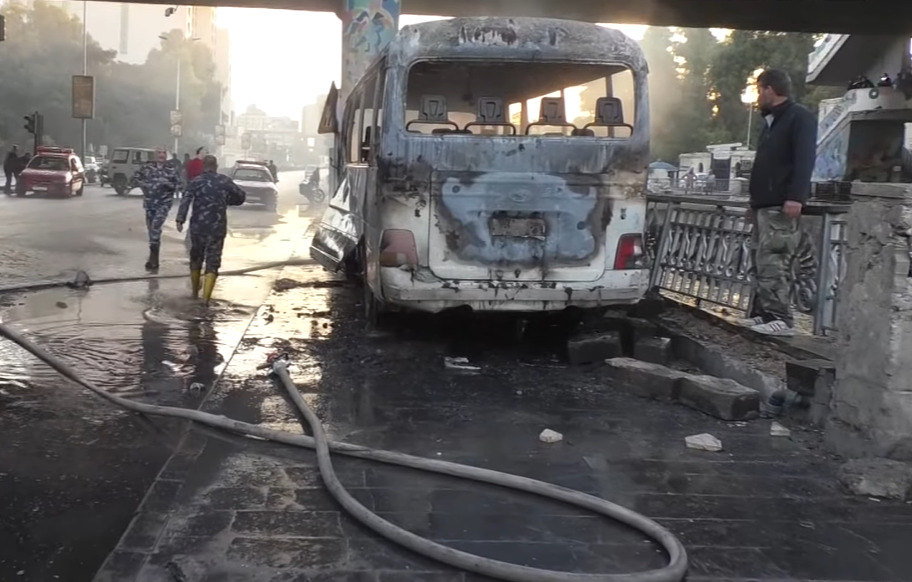 A screen grab from a SANA video (https://youtu.be/IPIelZ4cnRA) showing the aftermath of the October 20 Damascus bus bombing.

Syrian authorizes have neutralized a cluster of cells of al-Qaeda-affiliated Hay’at Tahrir al-Sham (HTS), the de-facto ruler of the northwestern region of Greater Idlib, which carried out a series of terrorist attacks in the capital, Damascus, over the past three years.

Six of the terrorist cells’ key members gave their confessions in a news report that was aired by the Syrian state TV on December 25.

The terrorists, five men and a woman, confirmed that they were behind eleven terrorist attacks and a failed suicide attack plot that took place in Damascus in 2019, 2020 and 2021. Their last attack was the October 20 Damascus bus bombing, which claimed the lives of 14 military service members and civilian workers.

Some of the terrorists most notable attacks were a failed attempt on the life of Talib Ibrahim, a political analyst who is known for his pro-government views, on 27 June 2019 and the successful assassination of Sheikh Muhammad Adnan al-Afyouni, the Mufti of Damascus, on 22 October 2020.

The terrorists identified their main handler as Abu Saleh, a senior commander of HTS General Security who is based in Greater Idlib.

Abu Saleh as seen in a photo released by the Syrian Military Intelligence, he is based in Idlib, a high-ranking officer of HTS’ General Security. pic.twitter.com/0g1d6JsIHO

The attacks carried out by the terrorist cells were claimed by a front group of HTS called “Saraya Qasioun”. Abu Saleh informed his terrorist operators in Damascus that HTS name can’t be linked to the attacks because the group is currently working to remove its terrorist designation.

Syrian pro-government activists revealed that HTS terrorist cells were neutralized as a result of a series of security operations carried out by the Military Intelligence Directorate after the October 20 Damascus bus bombing.

Meanwhile, some pro-opposition activists based in Grater Idlib confirmed the information revealed by the Syrian state TV, calling the detained terrorists “heroes”.

For the last few years, many journalists and researchers in the West have been working nonstop to whitewash HTS and present it as some moderate, heroic armed group. These efforts were not so successful however. Earlier this year, a leaked video revealed that the group is still recruiting children. Now, it is confirmed that the group is still carrying out terrorist bombings.

Despite clear evidence that HTS is still following the doctrine of al-Qaeda, the terrorist group continues to rule over Greater Idlib right under the eyes of the Turkish military and the US-led coalition.

The terror gangs sponsored by NATO are too stupid to stop their terror attacks, in order to be more ‘acceptable’ to the gullible Western public, :)