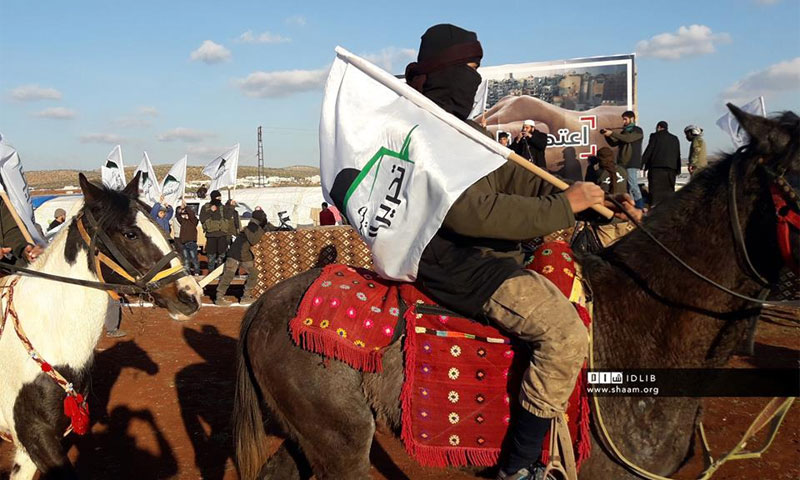 Clashes between Hayat Tahrir al-Sham (formerly Jabhat al-Nusra, the Syrian branch of al-Qaeda) and the Turkish-backed National Front for Liberation (NFL) are ongoing in the northwestern countryside of Aleppo, within the demilitarized zone area established under a Turkish-Russian agreement in September.

According to reports, units of Hayat Tahrir al-Sham attacked NFL positions in the village of Kafr Hamra on October 29 and had gained full control of the area by the evening of October 30. Several NFL militants were killed or injured in the incident, according to local sources.

Over the past few months, Hayat Tahrir al-Sham has continued expanding its influence in the parts of Aleppo, Idlib and Lattakia provinces, which are included in de-escalation agreements. While Ankara claims that it keeps the situation under control there, developments on the ground clearly shows that Turkey has reached a kind of deal with Hayat Tahrir al-Sham that allows the terrorist group to operate freely within the de-escalation zone.

These incidents once again demonstrate that while terrorist groups like Hayat Tahrir al-Sham are not eliminated in the Idlib de-escalation zone there are little chances that security can be restored and a peaceful solution can be implemented in the area.

they are brothers…….fight them and kill those bastards including them turks

and the knives come out… again

Sooner or Later, Rather if it’s 2018 or 2019 and beyond. The rebels will have to go and Idlib will be returned to the Syrian Government. It’s only a matter of time. The question is. When?

Well Israel has 50 years occupying Golan Heights ……may sooner or later Israel will return this land to its owner (Siria).

Hey Turkish backed Headchoppers Time to Blow up a Couple of these Al-Qaeda Headchoppers….Turkey give these Men some Suicide-Belts, Carbombs & IEDs….

The US and co. want to take control of 100% Syria and of Afghanistan in which they have failed. Now they want if they succeed in taking control of across Euphrate river. I am telling them that you are already failed in that mission too. Now watch US economy they cannot bear any more these costly wars. If they want to continue this war then US will break apart..

Your lasta analysis is not completely right since the industry and economy of USA is based mainly in war-economy. War is good for USA economy, and peace would be a disaster. That is the reason USA has to make some type of war all the time.

i hope it escalates to full scale war among terrorists.

I think they dont agree on the split and whose the boss. They did all the work after all.

Ha ! turcoalphabets warring amongst themselves. Ha! All predicted ,all coming to fruition. Nfl is just another grouping ,trademark name change for the same old ,cruel ,smelly turcoheadchoppers. What has changed? Nothing much apart from HTS remaining loyal to the Sauds after Erdogan and his Saud pals had a fight.

No surprises here. In my opinion, the de-escalation aggreement was strategically good for getting the Yanks off his back but tactically weak. Putin needs to bastinado and hang a few of these hts turcoheadchoppers from their beards to show them and Erdogan/Sauds ,who is the boss.

The sooner ,the better.