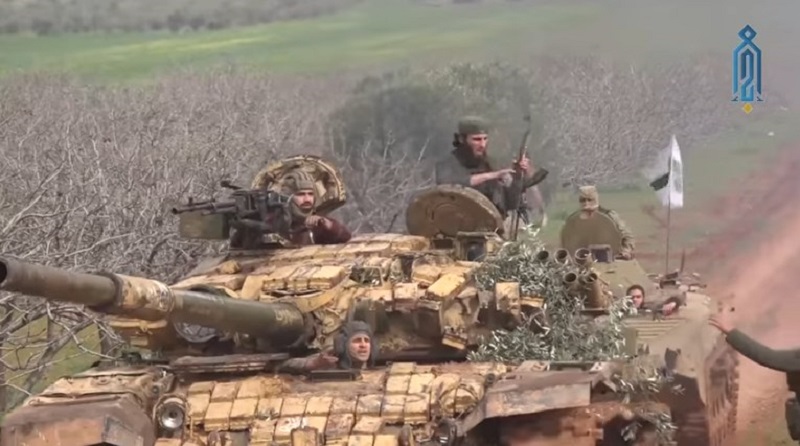 Following their success in Souran, jihadists captured the villages of Balhassin, Arzeh, and Talat al-Shiha and deployed dangerously close to Qamhana and the Hama Military Airport.

HTS units reportedly captured the town of Maardas. But this has not been confirmed by photos and videos yet. 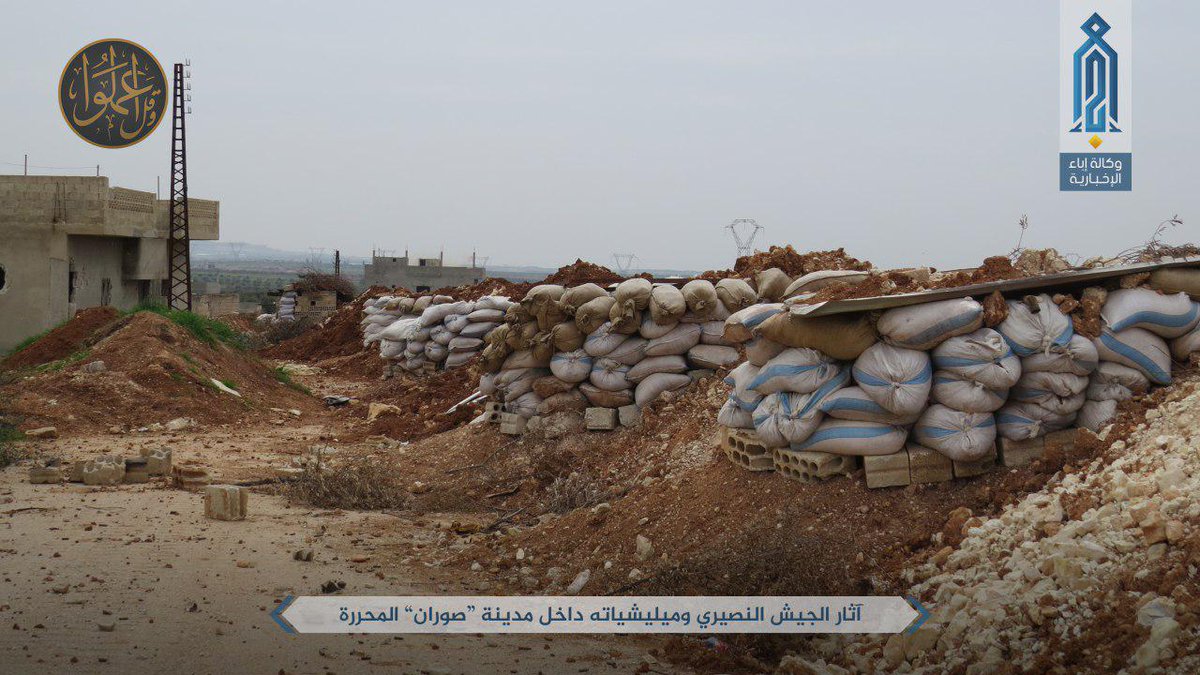 The Hama Military Airport is considered one of the Russian forces’ most important deployment hubs in Syria. The airport is often visited by Russian military servicemen and attack helicopters of the Russian Aerospace Forces use it as a transfer point.

A pro-militant map of the situation in northern Hama: 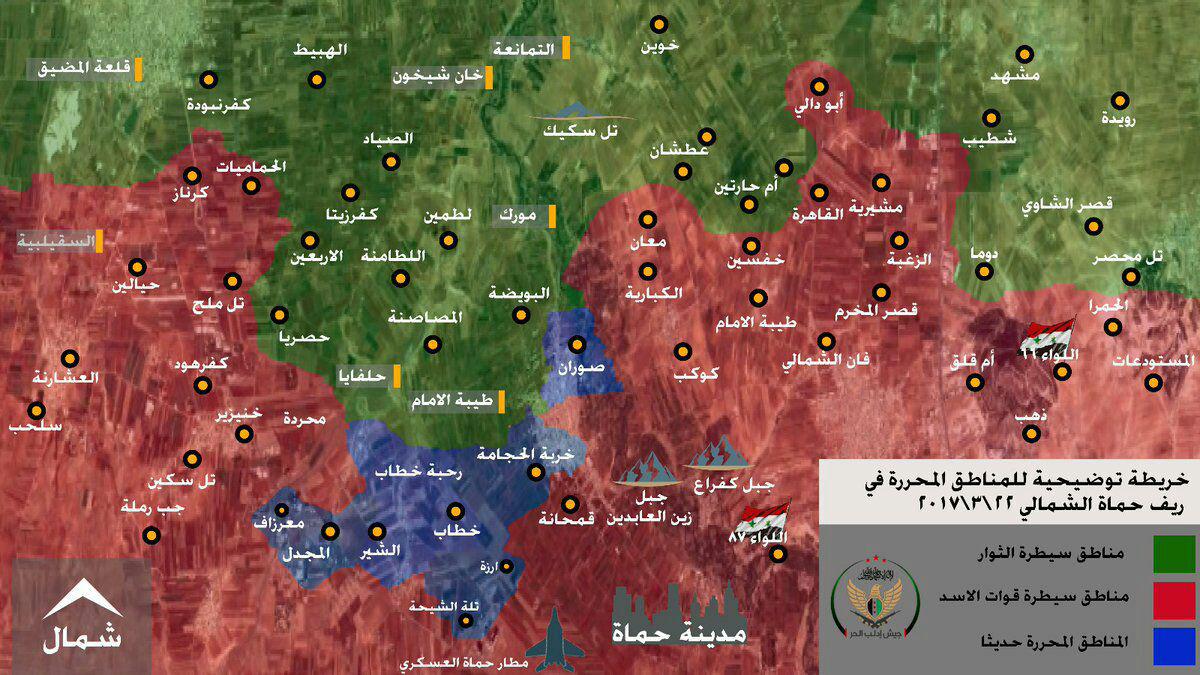 Considering the intricate defenses of the military facility, it is unlikely that HTS will manage to seize it or to deliver a significant damage to it. On the other hand, Qamhana is a staunchly loyalist stronghold with most of its residents fighting in the Tiger Forces formations of the Syrian Arab Army (SAA).

A militant launches an anti-tank guided missile against an alleged T-72 battle tank belonging to the SAA:

It is important to note that this is not the first time al Qadda-led forces managed to near these areas. In fact, they’d blitzed into this area a few times with the last being in 2015. 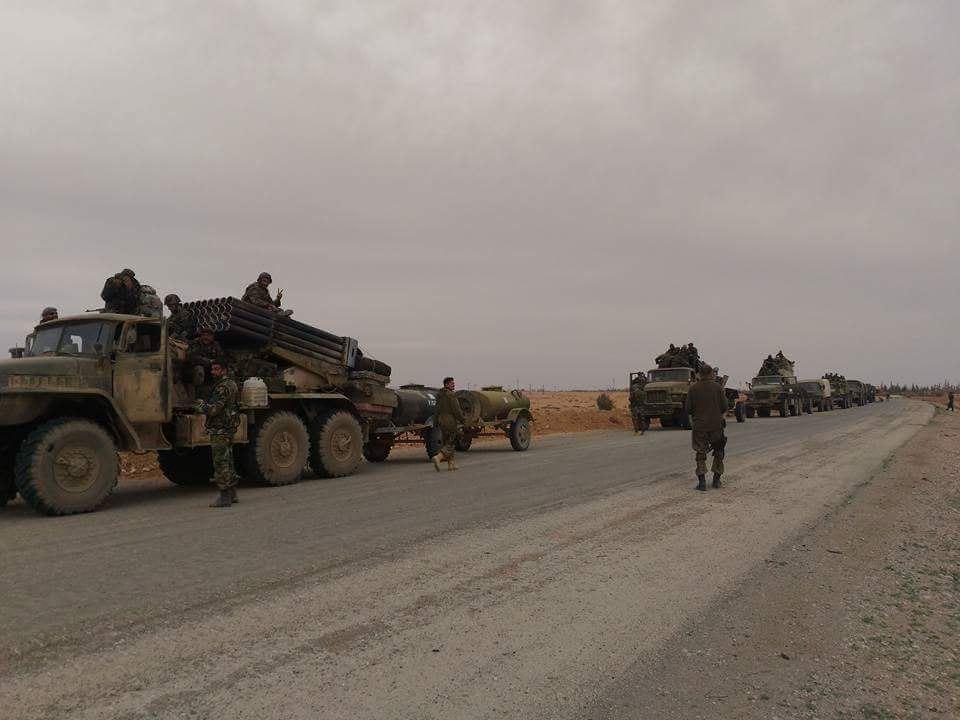 Like before, the SAA is expected to recapture those areas as reinforcements pour into the troubled front. Right now some units of the Tiger Forces are moving from Aleppo to northern Hama.

According to reliable sources, government forces deployed in the region have been ordered to keep a defensive posture until their ranks are reorganized for a successful counterattack – a tactic frequently used by the SAA. 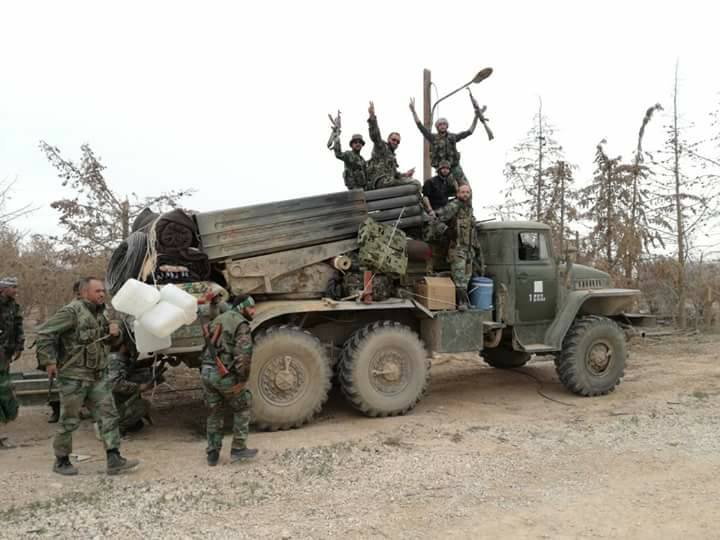 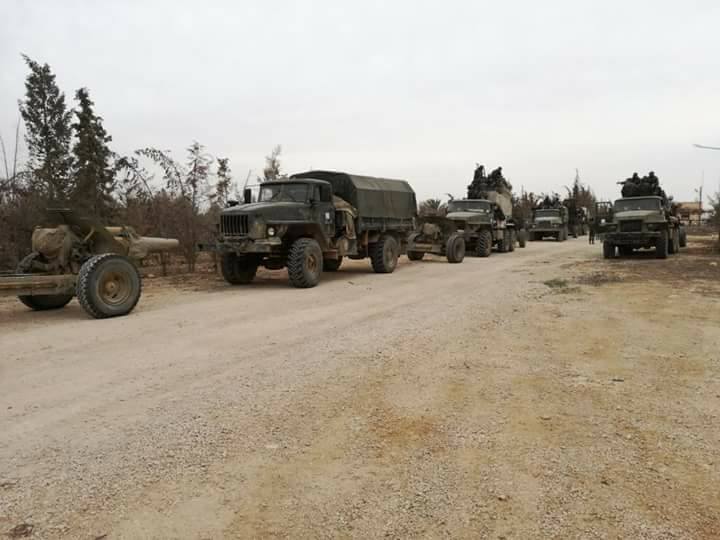 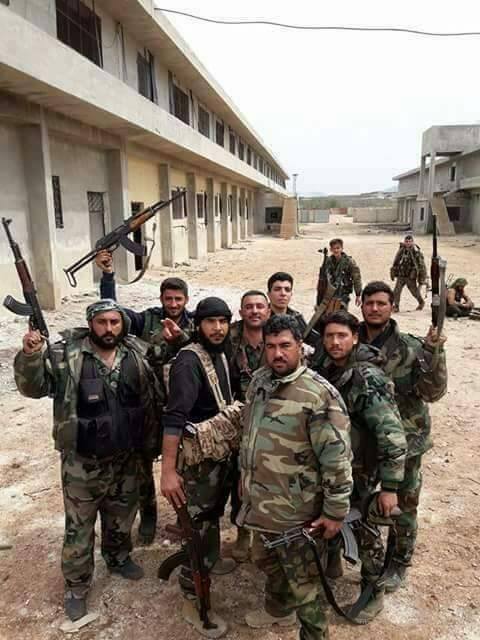 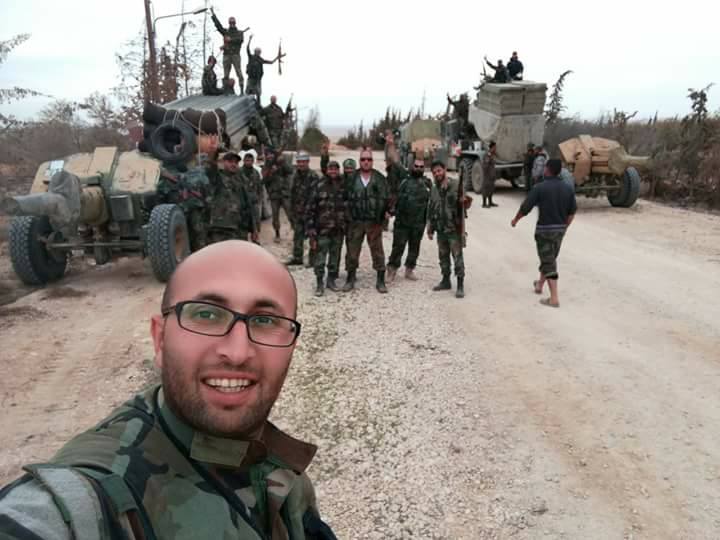 Deir Haffer will be liberated in the next days .Hama can wait

Maybe but these rats are spreading in 3 directions cutting supply lines for SAA all over Hama. I expected a diversionary attack by SAA on Latakia front by now. Plus i don’t get how RuAF and SyAF can’t take out the armor – the area is relatively flat, and rats are using mainly roads for advance.

Their goal is to cut off Hama Aleppo . They cant take the city . It will be like Homs or another Aleppo for them

Politicians lead war battles, not generals, iam from Serbia and i know it, we had that in 90s

Dejan you hit it spot on. High ranking army post are used for political reasons and are not people with any practical military knowledge or background. These are used to secure political support for ruling political regime. And that’s all good unless real combat situation arises. The situation is actually similar in Russia where 70% of gen staff are political figures. That’s why Putin is trying to get rid of them, and is firing generals in the army and police left and right. Given time he will sort this out.

Thats what i think, how russian technology cant see upcoming enemy armor and bomb them, they dont go underground

Probably they know but they dont strike them . There is something strange in Russian actions recently . What about Palmyra . Most of SAA air force is old junky cant do a lot but Russian

In my opinion SAA should start new front in Idlib or Latakia, FSA terrorists are now focused on Hama

They should . Why they dont do it

In ground combat there’s nothing strange with Russia – they want good planning, preparation and execution with defined goals – not mindless rush like Raqqa disaster. Holding the line and defensive preparation is SAA’s job. Why it doesn’t work in Hama is beyond me. It’s text book case: flat ground, road network to control and a hand full of strategic high ground to hold on to. Block the road with “hedgehogs” and some land mines, cover it with pre planned arty and some ATGMs and you’re fine…

What about jirah airbase?

Wow, such a broad, swift surrender, Syrians are just gutless, it’s unbelievable. No stomach for a fight at all, not even to defend their homes, their families! The fact that the Tigers are needed every time the enemy goes on the attack is absurd; 90%+ of the army is essentially useless.

dont forget that Syria is an alawite-run country with a sunni majority. That was the opposite problem of Saddam Hussein in Iraq, who was a Sunni ruling a shiite majority. Thats one of the main reasons the war against ISIS and FSA is very more complicated to the Syrian goverment than to the Iraq goverment, which is now formed by shiites and is directly supported by Iran. i think that Assad understands that he will have to focus on not losing more villages and cities and that he will have to wait a direct Iraq/Iran support before trying to push ISIS by himself.

After the fall of Mossul that should happen.

Assad could go for SDF support. SDF forces are sunni but not the islamist kind. They think either secular non arab (kurds)or secular regional or even tribal.

SDF has the numbers, the training, leadership and fighting spirit. They lack the heavy weapons. They will not fight for Assad or a centralisd arab Syria. They will fight for a secular, federal , multi ethnic and democratic Syria or, at the least, all of this in Northern Syria.

Let’s be realistic, the Syrian forces gave away some 3-10km. It’s hardly Barbarossa or Bagration. I do agree that it is annoying that the Tigers are needed on every occassion, but somehow modern Arab forces are just not very spectacular in combat. Nevertheless, in the grand scheme of things also remember that the rebel victories are very hyped and that they can only conduct tiny offensives on tiny portions of the frontline. It’s not like they have multiple divisions per kilometer of frontline. Personally, I would advocate to quell these small annoying pockets of resistance like Ghouta and Homs first before conducting luxury offensives like Deir Hafer. Wars are mostly won through logistics and the SAA is making it very difficult for itself with all these strained and scenic supply lines, not to mention all these kilometres of frontline that need guarding.

I generally agree with your assessment, but bare in mind that the attacking forces are mainly Arab. When was the last time the SAA seized 160 km2 in a day? In a populated area? Whoever is in charge of the defense of North Hama is incompetent and needs to be replaced. The jihadists have launched successful offensives in 2015 (Morek), 2016 (Taibat al-Iman, Halfaya) and now again in 2017. All this since the Russian intervention. I think Syrian government forces should go on the strategic defensive against IS after taking Dayr Hafir, Jirah AB, and Maskanah. With the American-Kurdish landing on the south side of Lake Assad, the SAA is effectively blocked from any meaningful contribution to the fight in Al-Raqqa province. Let the Kurds and Iraqis occupy IS in Al-Raqqa and Mosul while the SAA turns its attention to Idlib province. Completely agree with wiping out the pockets in Ghouta and Homs before turning to a concentric attack on Idlib from Latakia, North Homa, and West Aleppo. I think the SAA is over-stretched, trying to do too much at one time. They need to concentrate forces for a decisive push on one front, similar to what they did in East Aleppo city.

That was not a surprise at all! After finishing the Euphrates Shield operation and not being allowed to push the kurds to the east and then taking Raqqa, of course the Turks would come south or would they just go home? Erdogan must push as hard as he can in central Syria to leverage his position in the future negotiations after ISIS defeat.

Typical russian incompetency. The Kremlin thought that this was “mission accomplished” and let the terrorists gather forces and momentum. ISIS is finished, the real threat has been these “moderate beheaders” but Putin & Lavrov allowed them to regroup time after time with their foolish ceasefires.

If the USA would be a country in Europe, perhaps they would make similar efforts to prevent the planned nuclear extermination as Russia does. But in the final stage of its crisis of existence, the Wallstreet capitalism needs new investment opportunities in Russian resources or a further big war in order to be able to reach the goal of world domination.