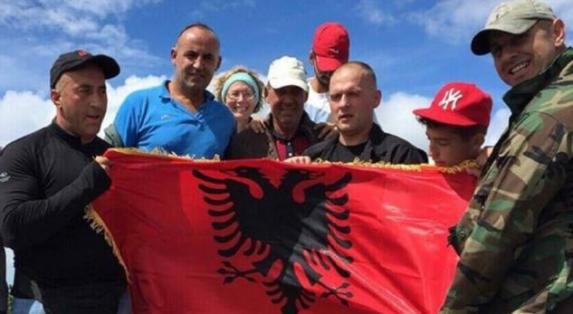 This article originally appeared at IN4S, translated from Serbian by Slavko Kovačević exclusively for SouthFront

Leader of the Alliance for the Future of so called Kosovo Ramush Haradinaj published pictures on which he is saw holding an Albanian flag on the disputed areas alongside the border between Montenegro and Kosovo. Photos were taken on Čakor, where Haradinaj demands subtraction of 75 square kilometers of Montenegrin territory.

Haradinaj sought from institutions in Pristina to break off process of boundary delimitation with Montenegro because, as he states, border must be identical as the one from the Constitution from 1974.

Portal lapsi.al reported yesterday that Haradinaj raised the flag of Albania in the disputed area in the middle of the debate about boundary delimitation between so called Kosovo and Montenegro. He appeared in those areas with the company of some other citizens.

Government of so called Kosovo adopted report of border line with Montenegro which was submitted by State commision for delimitation, in which the 1974 border was completely respected.