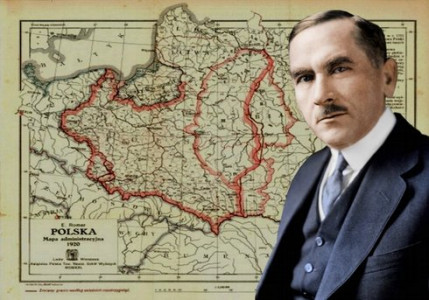 Published in Mysl Polska [Polish Thought], one of the oldest Polish political weeklies.

Translated from Polish by J.Hawk

Preface: We are watching what Roman Dmowski warned the Poles against come true. He wrote about this over 80 years ago in a very different political environment. However, his observations and conclusions are unusually relevant to our own time. It’s useful to relate his words one more time, may they prompt reflection among those who succumbed to emotions and false suggestions:

“There is no human force capable of preventing Ukraine, once it is torn away from Russia and transformed into an independent country, from becoming a destination for con-men from all over the world who are unwelcome in their own countries, capitalists, capital-seekers, business organizers, technicians and merchants, speculators and schemers, thugs and pimps: Germans, French, Belgians, Italians and Americans would find assistance by local or nearby Russians, Poles, Armenians, Greeks, and the most numerous and important of all, the Jews. It would be a veritable League of Nations of sorts. This elemental force, with the participation of the cleverest and most business-savvy Ukrainians, will become the country’s leadership elite. It would be a a most remarkable elite, since no other country could boast such a rich collection of international low-life.
Ukraine would become an abscess on Europe’s body; and people who dream of establishing a cultured, healthy, and powerful Ukrainian nation that could mature in its own state would quickly realize that, instead of a state of their own they have gotten an international corporation and instead of healthy development only rapidly progressing rot and decay.

Those who believe that, given Ukraine’s geographic location, its size, and the state of the Ukrainian element, its spiritual and material resources, and the role the Ukrainian question plays in the global economy and politics, it could be otherwise has no imagination whatsoever.

The Ukrainian question has various promoters, both in Ukraine and abroad. There are many among the latter who know perfectly well what they are aiming at. But they are also those who view the question of tearing Ukraine away from Russia in a most optimistic manner. Those naive ones would be best served by keeping their hands off Ukraine.”

J.Hawk’s Comment: Dmowski, being a card-carrying Polish nationalist, understood perfectly well what real nationalism looks like and how Ukraine’s version thereof falls well short of that ideal. The “Ukrainian element” is still not quite up to the task of running the state–if it were, post-Maidan Ukraine would not have become a state that boasts such “a rich collection of international low-life” in top government positions!