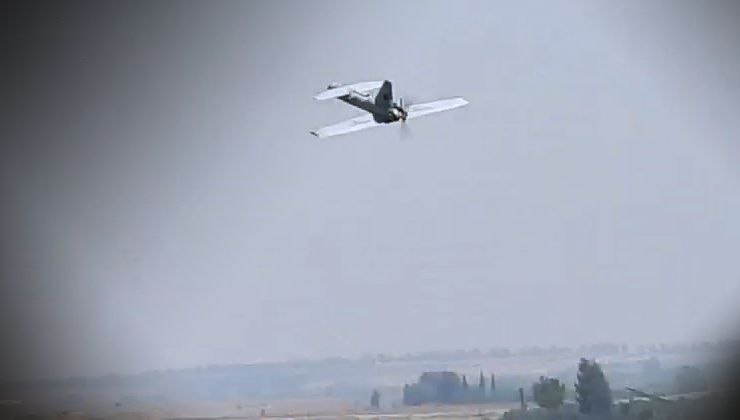 On May 14th, the Izz ad-Din al-Qassam Brigades, the military wing of the Hamas Movement, announced that it had targeted an Israeli chemical plant.

In a brief statement, the Palestinian group said that the plant, which is located in the settlement of Nir Oz, was targeted with a Shehab Suicide drone. The group didn’t provide further details on the attack. However, observers speculated that the target was the Nirlat chemical plant.

Israeli authorities issued drone infiltration alerts in Nahal Oz, as well as in the nearby settlements of Alumim and Be’eri. Nevertheless, no interceptions were reported.

The Shehab suicide drone, which appears to be a downgraded copy of Iran’s Ababil-2, was recently unveiled by the Izz ad-Din al-Qassam Brigades. The drone was used in two attacks on May 12th and 13th. It’s specifications and capabilities are yet to be revealed.

Meanwhile, Palestinian factions continue to launch rockets from the Gaza Strip towards Israel. In the last few hours, several settlements, including Kiryat Malachi, Herzliya and Ashkelon, were targeted with dozens of rockets.

Some of the rockets bypassed the Iron Dome system, which resulted in some material damage. However, no casualties were reported by Israeli sources.

A day earlier, an Israeli woman from a settlement near the city of Ashdod died from an accident resulting from a rocket impact. The death raised the total number of people killed in Israel by Palestinian rocket fire since May 10th to seven. Up to 200 others were injured.

Despite reports of a ground offensive on the Gaza Strip, Israeli operations are still limited to aerial and artillery strikes. This may change soon.

Allalolah has sent a mighty drone created by the gay Ayatollah from Iran to tell the whole world that there are no sex toys in Gaza so they need to send the drones to murder everybody and make the entire world puke instead.

Tondar will be used when Iron Dome is out of ammo.

any idea when taht will be?

I wonder if this really happens

Allalolah says that Russia needs to mediate a ceasefire immediately so that the Hamas Poo Poo and Islamic Yahoo can go back to hiding behind the gay Ayatollah from Iran and the rest of the international community because right now they’re getting raped in the ass if they don’t stop.

Man, you need mouthwash, like real bad. The smell of manure emanating from your breath is overwhelming, just like the smell from those depends the IDF wears…and what is with your obsession with butt-raping? Gee, just call Nutsack and get a room.

Allalolah is mighty and the gay Ayatollah loves to keep all his cut off homosexual cocks inside his favorite golden treasure box afted he hangs them and performs oral sex with their hanging bodies.

If Hamas with the indirect assistance of Hezbollah and the IRGC is able to inflict significant damages to Haifa’s petrochemical facilities and refineries, such attack will indeed become a turning point in this ongoing war.

the drone did not hit its target. and for those thirsting for a wider war: nothing stopping you from joining Hamas or Hiz. If they do not kill you as a potential spy, I am sure they would appreciate another shahid.

The new system, even voting? Nice!