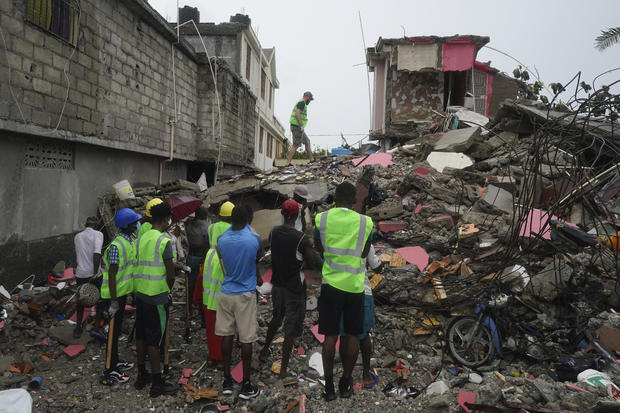 The death toll from the weekend earthquake in Haiti jumped to 1,941, with over 9,900 injured, Haitian officials said on August 17th.

The news comes as remnants of Tropical Depression Grace battered the country with heavy rain, complicating search and rescue efforts.

In Les Cayes, one of Haiti’s largest cities, many of the homes and businesses have been destroyed, forcing many to camp out in the open. Nearly 20 miles north, in the village of Maniche, Mayor David Brinard said 98% of the town has been obliterated.

Quake damage to several major hospitals hampered humanitarian efforts, and doctors in makeshift tents outside battled to save the lives of the many injured, including young children and the elderly. But they could not help them all.

“There weren’t enough doctors and now she’s dead,” said Lanette Nuel, sitting next to her daughter’s body outside the main hospital of Les Cayes, one of the towns worst hit by both the tremor and the storm’s heavy rains and winds.

The search for survivors of a weekend earthquake that killed more than 1,400 people on Haiti resumes after an overnight storm battered thousands left homeless with heavy rain before the weather front moved on. More photos: https://t.co/vYjACjX42d 📷 @rarduengo pic.twitter.com/ppiCNpSQFk

The August 14th quake knocked down tens of thousands of buildings in the poorest country in the Americas, which is still recovering from a temblor 11 years ago that killed over 200,000 people. Aside from the dead, the latest quake also injured at least 9,915, with many people still missing or under the rubble, the civil protection service said on Tuesday afternoon.

Relief efforts were already complicated due to political turmoil and difficult road access from the capital to the south due to gang control of key points. Flash flooding and landslides in the wake of Tropical Storm Grace, which by Tuesday afternoon had continued on past Jamaica, exacerbated the situation.

“Countless Haitian families who have lost everything due to the earthquake are now living literally with their feet in the water due to the flooding,” said Bruno Maes, the United Nations Children’s Fund (UNICEF) representative in the country.

“Right now, about half a million Haitian children have limited or no access to shelter, safe water, healthcare and nutrition.”

The United Nations said it had allocated $8 million in emergency funds to provide relief for affected people.

Although criminal gangs have been blocking access roads for months, the United Nations Office for the Coordination of Human Affairs said “successful negotiations” had made it possible for a convoy to reach Les Cayes.

Haiti’s latest natural disaster comes just over a month after the country was plunged into political turmoil by the July 7th assassination of President Jovenel Moise.

U.S. national security adviser Jake Sullivan said it was too early to gauge the impact of the quake on Haiti’s political process and that the United States, the country’s main donor, had no current plans to deploy its military there.

Prime Minister Ariel Henry, who was sworn in less then a month ago after Moise’s assassination, vowed to disburse humanitarian aid better than in the wake of the 2010 quake.

Though billions of dollars in aid poured into Haiti after that quake and Hurricane Matthew in 2016, many Haitians say they saw scant benefits from the uncoordinated efforts: government bodies remained weak, amid persistent shortages of food and basic goods.

“The earthquake is a great misfortune that happens to us in the middle of the hurricane season,” Henry told reporters. He said the government would not repeat “the same things” done in 2010.

The disaster is massive, and it is due to a mismanagement of resources and other issues, including political, economic and criminal.