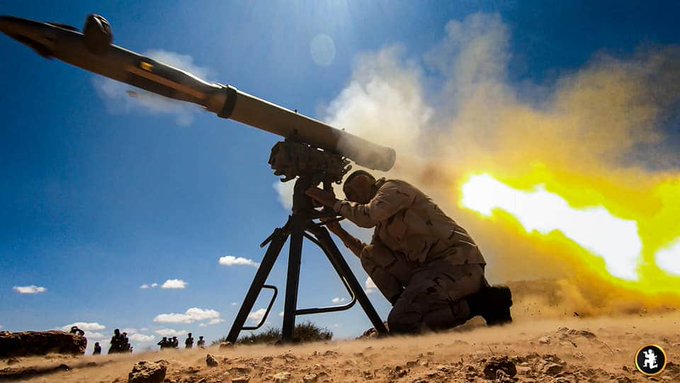 The spokesperson of the LNA, Brigadier General Ahmed al-Mesmari said that a successful missile test had been conducted, after a platform was constructed near Benghazi.

Sirte is of incredible significance, because it is the next stronghold that the Government of National Accord (GNA) and the Turkish forces need to take over in attempting to entirely turn the tide.

It is also of significance, since the House of Representatives, based on Tobruk, invited Egypt to intervene militarily if Sirte were to be attacked.

On July 20th, the Egyptian parliament approved a military deployment to counter the militants that the GNA employs and that Turkey has deployed to Libya if Sirte were to be attacked.

Greece announced its support of Egypt’s initiative in Libya and that it was behind it, which likely means a bit of diplomatic push, but it is unlikely that in the case of hostilities any Greek forces would join the fray.

The Algerian Foreign Minister also made a statement saying that it supported the positions of Tunisia and Egypt regarding the situation in Libya.

“There is a great convergence between our vision and the positions of Egypt and Tunisia regarding the Libyan crisis, and we understand the national security challenges facing Libya’s neighbors.

Our vision to settle the Libyan crisis is based on a ceasefire, the initiation of negotiations, the push for a peaceful solution, the rejection of foreign interference, and respect for the arms embargo.”

There are still no hostilities on the ground, and there is still much intensity diplomatically, with Field Marshal Khalifa Haftar and GNA President Fayez al-Sarraj frequently taking part in discussions with their presumed allies.

Both France and Turkey wants Lybia for ifself. Its neo-colonialism. Its also worth to mention that Lybia is an oil rich country and has the biggest sweet water reservoirs on the African continent…

Turkey has no resources and is desperate to plunder Libya’s low sulfur high quality oil. If the Egyptians had not been such cowardly cunts, the Turkeys would not have lasted a week in Libya. Egypt is unlikely to invade Libya as it had hard time moving an armored brigade to Mersa Matruh, let alone move 600 kms into central Libya or the Mediterranean coast.Egypt is also facing an increased ISIS, Sinai Bedouins and MB opposition at home and its military is in very poor state as the recent logistics failures have shown. But if the GRU gets the OK, just 1800 Wagner Group are enough to liberate Sirte.

Since you sound like well informed person on military matters (specially) when it comes to Egypt. I must ask you why is Egypt so weak in your eyes if they have 50 new MIG-29M2 and are about to get 24 new SU-35 ? Handful of Turk F-16 can’t even fight them let alone resist them.

Not to mention naval support from 2 Mistral’s with K-52 naval attack choppers. Doesn’t that represent formidable adversary force for Tripoli and Turk expeditionary force that is far away from home?

I base things on objective analysis. Egyptian military since 1974, when the Jew cunt Kissinger conned the traitor Sadat to sell Palestine and Syria away for $3 billion a year charity, their officer corps is totally controlled by CIA and MOSSAD. Every officer over the rank of Major is vetted by them. Egyptian rank and file are basically uneducated Fellahin from the Nile region and very poor at maintenance and technical know how. Egypt has been a police/military state since its nominal independence and the corrupt military has been suppressing its own people and Palestinians in locked down Gaza. Any country can buy a lot of modern weaponry, but if it has low educational competence, then they are useless. Saudi cunts have the second highest military expenditure in the world and weapons purchases, even bigger than India, but the morons can’t even change a car tire, just look at Yemen. Egypt is no better. The Turks for whatever their grandiose Ottoman fantasies, are a NATO educated military and quite good. Egypt is outclassed in terms of professionalism and competence.

Thank you for detailed expertise. Now, I can understand what you meant in the previous comment. There is something that is still not quite logical in that story. Why all that posturing in Egypt if they are US stooges only and if they know how competent and dangerous Turks can be (comparing to their own army) Do they underestimate the Turks or all this is just much ado about nothing, for domestic political consumption (they pretend to… but they know, they will not do anything to start the war against Turks)

If you read even their posturing, the Egyptian puppet parliament only gave approval for “operations limited to Egyptian borders”. In the past month they have been trying move an armored Brigade west of Mersa Metruh and have failed. Their C3I sucks, there is no infrastructure and Egyptian economy simply will collapse. They have bread riots even if the price of food goes up by a few qirsh (cents), do you think they can really fight an ongoing full scale with NATO’s second largest military? I think not. They are having enough problems and existential threat from Ethiopia daming the Nile.

Thanks again; for your detailed answer.

Unfortunately for Africa :) ……(I’m joking of course) I am from Eastern Europe. See …not all the Europeans are retarded.

Like I have said before, eastern Europeans from the old Soviet bloc were pretty well informed. Many of them worked in Arab states and Middle east on industrial projects. I have some Serb friends who worked in Algeria and really fond of the people.

The nuclear aircraft carrier, U.S.S. Dwight D. Eisenhower, and 12 other warships have arrived in the Mediterranean, near the Libyan coast to deter Russia, according to the Pentagon.

Interesting even though not unexpected news. To “deter” Russians how? Russia doesn’t keep any ships near the Libyan coast. It sounds just like lousy excuse for direct interference in situation in Libya. It might be some secret arrangement with UndErdog.an

The Arab world is crumbling and we will all feel the shock waves.

There never has been an “Arab world”, they are disparate tribes, brother against brother, father against son and family against another. The British faggot major T.E Lawrence said that. They are petty people who failed to unite or develop nationalism. If the Arabs were united and educated, do you really think 6 million alien interloping “Jews” would be lording over them in Palestine and the region kiddo? Always look at the big picture.

The Arabic proverb is : “ Me and my brother against my cousin. Me and my cousin against a stranger.”

Ain’t that the truth.

This is the essence of Arab tribalism.

You are right too Sire. The Jews have really infected the human brain, especially in the west. Sad and we are all paying the price.

I agree the Arabs suffer greatly from disunity, but in 1948, they united to crush the new Jewish state. The problem was failure to coordinate their operations which the Jews exploited. The Arabs were also over-confident and arrogant. In contrast, the Jews had been preparing for two years and carried out a well coordinated thought out plan – and we know what happened. Lack of coordination has been an ongoing problem – Saudi Coalition assault on Hodeidah a perfect example when they tried to use combined arms, total disaster.

One thing, T.E. Lawrence (Lawrence of Arabia) I have read a fair amount on including two lengthy autobiographies. Lawrence passed on the British offer to the Arabs with the belief the offer was sincere. The Arabs agreed to revolt against their Ottoman masters after Lawrence conducted skilled diplomacy. Lawrence did not let Arabs go into battle for him to watch them die, he rode into battle with them, often leading the charge. With his small poorly equipped Arab force, he led a brilliant guerrilla campaign and Lawrence’s tactics are studied in war colleges to this day.

When Lawrence learned of the betrayal of Sykes-Picot, he sacrificed a great deal of his standing in Britain by joining the Arab delegation to advocate the Arab point of view at the 1919 Paris Peace Conference. Lawrence made genuine efforts on behalf of the Arabs, but the British and French had made up their minds well before the conference. Defeated, Lawrence felt guilt and attempted to hide from public life away from his famous persona “Lawrence of Arabia” which reminded him of the betrayal.

He may have been gay, but he was courageous, honorable and a tragic figure in my view..