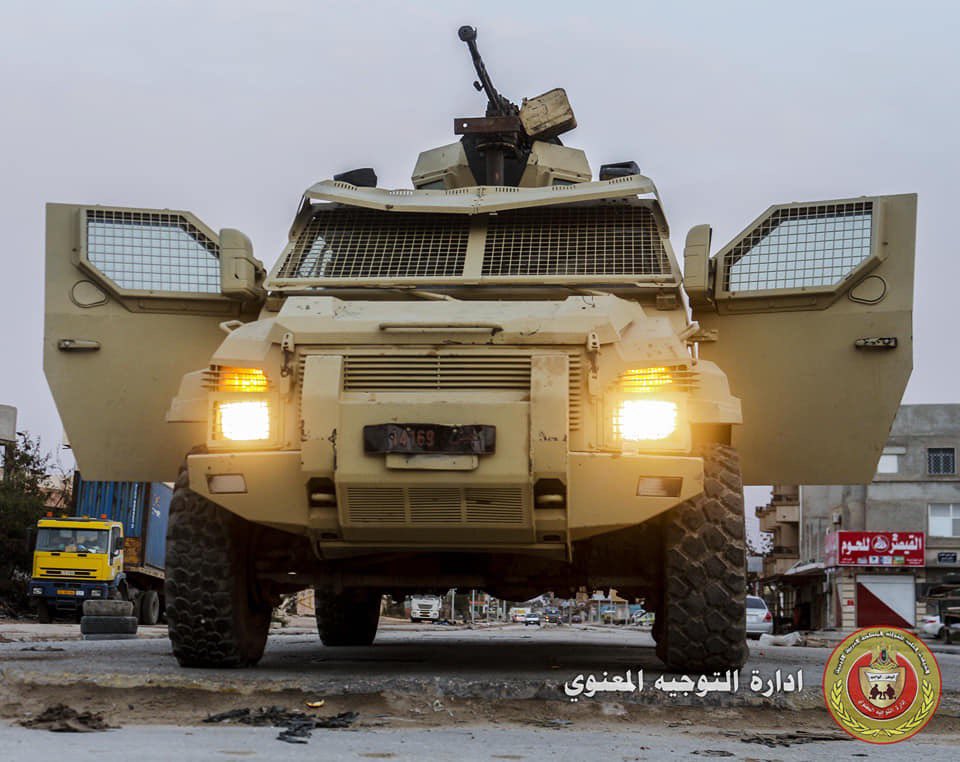 On March 25th and in the early hours of March 26th, Field Marshal Khalifa Haftar’s Libyan National Army (LNA) reportedly had significant success in its push against the Government of National Accord (GNA) around Tripoli.

In response to an attack by the GNA on the al-Watiya air base, the LNA captured 5 towns from the enemy forces, as well as the Tunisia border crossing, and surrounded the city of Zwarah.

A map of What happened today.
1) #GNA militia attack on Alwitya airbase.
2) #LNA counter offensive resulting in the liberation of 5 towns , the Libyan Tunisia border crossing and surrounding the city of Zwarah.#Libya
Made by @Suriyakmaps pic.twitter.com/FKPxnMMtX5

A graphic video was released by pro-LNA sources purportedly showing a large number of GNA fighters, reportedly most of them Syrian, transported to Libya by Turkey.

Military update
The #GNA militias after suffering a crushing defeat. Have split into to main groups
Group A : Ran to the Tunisian border & currently negotiating with the #Tunisia army for protection as they are stranded and surrounded.
Group B:is under siege by the #LNA in Zwarah pic.twitter.com/T84yDEWshs

#GNA militia in Zwarah under the cover of the night smuggling their family to #Tunisia in civilian cars .
The #LNA let them pass freely.

According to him, the Government of National Accord (GNA) detained 16-20 Syrian mercenaries on suspicion of being coronavirus positive and transferred them to Al-Rahba Camp in Tajoura.

Additionally, during his speech, he called on all Libyans to comply with sanitary and hygienic measures to prevent coronavirus infection and commented on the attack of the GNA forces at al-Watiya air base, which the LNA forces managed to repel.

“This is all Turkey’s plan. The Turkish groups associated with the militants in Misrata, Homs, at the Mitiga airport and elsewhere – they are all foreign fighters, Syrian mercenaries and Turkish military with modern weapons. They were all specially transported here to support the militants of The Western Region [GNA]: Erdogan ordered them to make a major maneuver to attack any of the important military positions: either east of Misrata, or in the Tarhuna region, or on the fronts in Tripoli, or on the base of al-Watiya.”

He said that this activity is a violation of the ceasefire agreement from January, which according to Field Marshal Khalifa Haftar’s forces is still in effect.

“Every day they make new attempts to conduct military operations and make new unsuccessful attacks … They fight in Tripoli, and 3 days ago sent reinforcements, consisting of Chadian rebels and Syrian terrorists, to the east of Misrata – to the region of Abu Grain. Also, the Turks use various means of electronic warfare. There are also groups of mercenaries who are concentrated in the regions of Msallati and Zliten.”

Finally, he spoke of GNA-aligned militia, who connected with the Turkish troops at Mitiga air base, who took part in the attack on al-Watiya.

“Osama Juwalei’s militia is largely connected with the Turks stationed at Mitig Air Base. Today they carried out an attack on the territory of al-Batuy air base.

This base is Libya’s westernmost air base and strategically important point. This airbase with a very large area is about 50 square kilometers.

Along with the attack on the air base, attacks were conducted on our forces in Tripoli. The battalion, which protects the air base, has an administrative headquarters, and the personnel are stretched along the border of the base, where there is a fence – about 40 km long.

The main enemy forces were able to enter the territory of the base, but the defenders were able to quickly respond and repulse the attack. I talked with the officers defending the base.

All of them confirmed to me that the enemy was driven back more than 20 km from the base. Our troops carried out a successful counterattack. This attack is a very serious violation of the ceasefire.”

On the side of the GNA, the Volcano of Rage operations room also released a statement of what transpired on March 25th.

According to the statement, over the past three days, shelling continued on the capital of Tripoli, on March 25th attacks were carried out on the areas of Abu Salim and al-Saba, which led to civilian casualties in their homes, who were fulfilling the quarantine obligations.

On March 25th, LNA forces tried to destroy the ambulance station, as well as the warehouse of the medical supply department, with their shelling.

The operational headquarters of Operation Volcano of Rage launched Operation Storm of the World, during which it attacked the positions and artillery crews that fired on Tripoli.

GNA forces carried out a successful operation at the al-Watiya air base, during which several mercenaries were captured and several pieces of equipment and ammunition were captured as trophies.

GNA forces carried out a successful attack in most of the military areas in the south of Tripoli, took control of new positions, captured several LNA soldiers, destroyed pickups and several UAE armored vehicles.

Finally, GNA units should take preventive measures against coronavirus during contact with mercenaries and their equipment.

Both sides claim significant success, with the LNA appearing to provide some more evidence of their claims.

Iraqis use a water-cannon vehicle to spray disinfecting liquid in the streets of the center of the southern city of Basra on March 25, 2020, in a bid to slow down the spread of the novel coronavirus that causes the COVID-19 disease. (By AFP) A faction of Iraq’s Popular Mobilization Units (PMU) blows the lid off a plot by the US military to carry out massive aerial operations — backed by ground troops – against bases of the elite anti-terror force, which is currently busy helping the government in the fight against a new coronavirus pandemic. In a statement on Wednesday, Kata’ib Hezbollah reported “suspicious activities by the US and its mercenaries” in Iraq in preparation for an operation, according to Iraq’s Baghdad al-Youm website. In the current difficult situation, when Iraq has mobilized all its resources to contain the spread of the coronavirus and the popular forces are busy helping the government in the battle, the PMU has been monitoring “suspicious moves by US forces and their mercenaries,” who intend to exploit the pandemic and advance certain plots in the country, the statement said. The US plans to conduct heliborne operations backed up by ground troops and fighter jets against positions belonging to security agencies and positions of Iraq’s resistance groups, the statement added. The statement further said that certain Iraqi military and security forces would participate in the operation.

Iraq condemns US airstrikes; says soldiers, police, civilians killed The Iraqi military and the presidency have condemned new US airstrikes, saying they killed soldiers, police officers and civilians Thursday night. Kata’ib Hezbollah also warned against the dangerous consequences of such a raid, saying it would worsen the health crisis in Iraq and bring about a humanitarian and social disaster there. Stating that the US plot endangers internal peace in Iraq, the resistance group vowed a firm response to any such operation. Iraq’s resistance forces will have many options in face of such a move by the occupying enemy, the statement said, adding that the resistance forces would have to respond “with full force” by targeting the US “military, security, and economic facilities without exception and turn into their graveyard the positions they have planned to attack.” It also warned any Iraqi party against collaborating with the US in carrying out this conspiracy. “The Iraqi side will be treated like an enemy, and its betrayal and crime will never be forgiven… and will be heavily punished according to law,” it said. Anti-American sentiment has been running high in Iraq following the assassination on January 3 of Iran’s top anti-terror commander Lieutenant General Qassem Soleimani along with Abu Mahdi al-Muhandis, the deputy head of Iraq’s PMU , along with their companions. The terrorist act promoted the Iraqi parliament to vote for the expulsion of US forces from the country, but the government has not acted on the decision yet as it is grappling with a political deadlock. After the assassination, Iran and Iraq’s PMU vowed revenge, with Tehran targeting two US bases with missiles days later. The PMU also said the reaction would be “no less in size” than Tehran’s missile strikes. It has, however, denied repeated US claims that it had been behind rocket attacks targeting US and other foreign missions and bases in Iraq. Earlier this month, the Iraqi military renewed the call for an immediate withdrawal of all foreign troops from the country in accordance with the parliamentary resolution passed earlier this year following a string of US strikes against multiple PMU positions. The US blamed the Iraqi force for attacks on a base hosting American troops in the Arab country. The PMU, however, denied any involvement.

That captive is very young. I reckon he doesn’t know much about anything, having lived under jihadi rule (willingly or unwillingly we don’t know) in Syria for years. Is he even a native Syrian?