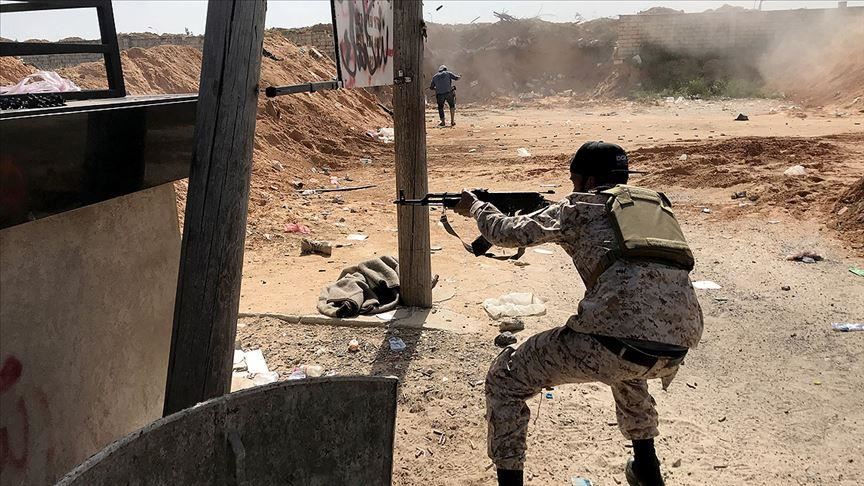 Spokesman of the LNA Major General Ahmed al-Mismari made several statements, claiming that the LNA were advancing.

He further said that “the Turkish president exceeded all the standards of the international community and the Security Council and contributed to the transfer of extremist militants from one country to another.”

Finally, he alleged that Turkey not only threatens security in Libya, but also threatens the security of the entire Arab region. 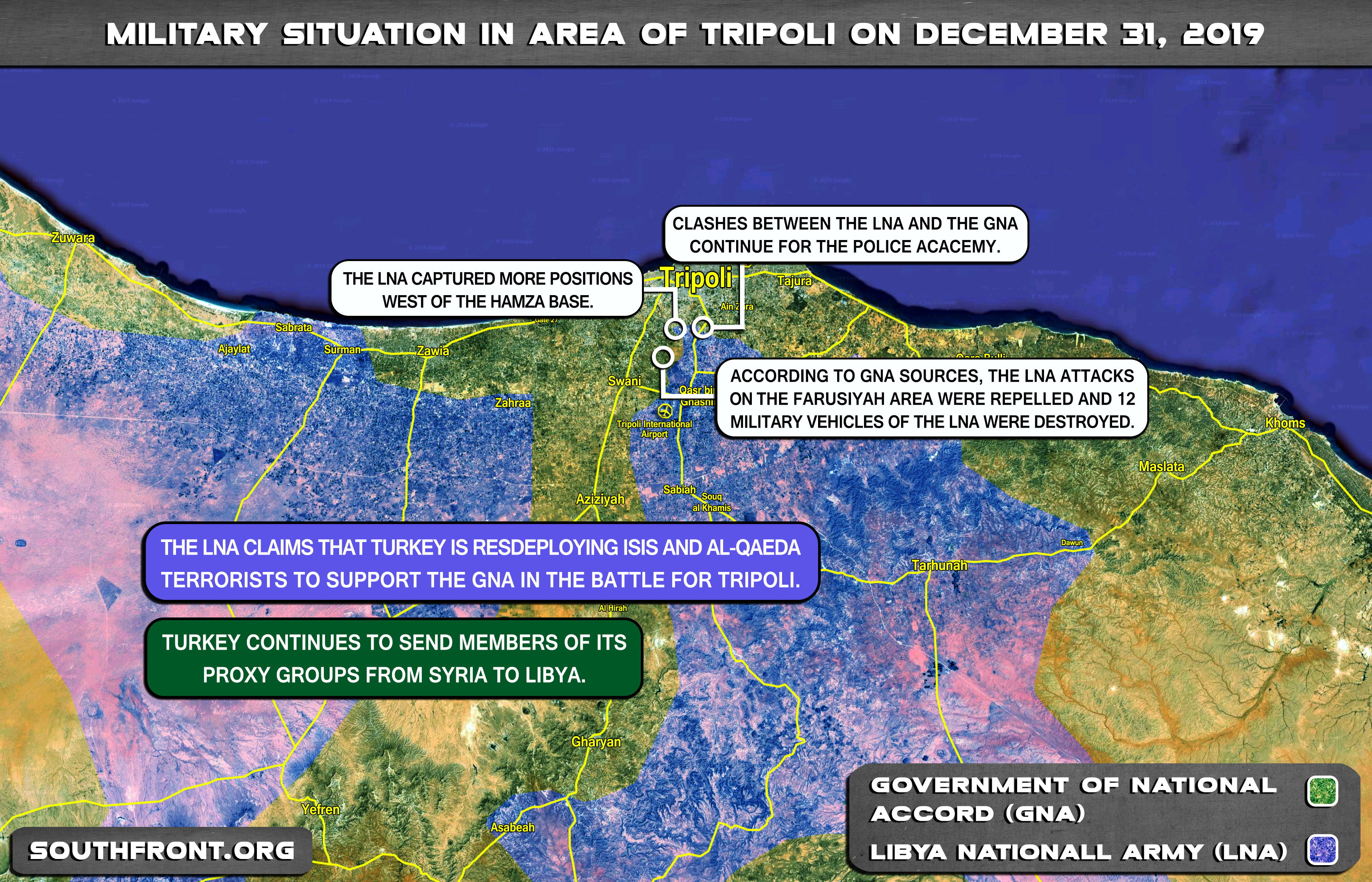 On December 31st, an emergency meeting of the Arab League began, to discuss the situation in Libya.

Meanwhile, Turkey continues with its own propaganda efforts, with Turkish President Recep Tayyip Erdogan and Turkish Defense Minister Hulusi Akar both saying that Ankara was forced to sign the memorandums of understanding with the UN-assigned Government of National Accord (GNA), as there was a “plot” against it to exclude it from the Eastern Mediterranean.

“The project to exclude Turkey from the Mediterranean has been foiled with the latest steps we have taken,” Recep Tayyip Erdogan said.

“With support to the legitimate Tripoli government, Turkey will ensure implementation of all elements of agreements with Libya,” Erdogan added.

On December 30th, Turkey’s presidency submitted a motion to the Parliament Speaker’s Office on sending troops to Libya. The parliament is set to debate the motion on January 2nd.

The Turkish Defense Minister said that the agreements with the GNA were vital to Turkey “protecting its rights” in the Mediterranean Sea.

Turkey’s state outlet, Anadolu Agency, reported that the GNA had repelled an attack by the LNA, and destroyed 12 armed vehicles and killed 10 enemy fighters during clashes in southern Tripoli. Both the GNA and LNA regularly provide updates claiming that they are successful in their fights.

The GNA provided an alleged video of it shelling LNA positions at the Equestrian Bridge.

A photograph was uploaded of alleged the Turkish-backed Free Syrian Army, who are waiting at an airport to be transferred to Libya so they can join the fight.

Someone should seriously take away all phones from Syrian fighters before deploying them anywhere… ? pic.twitter.com/glZwVly9Lq

I will support anyone against the Yanks or Turks; therefore go LNA.

CONFIRMED: Butcher regime mercenaries are on the ground in support of the Haftar regime. Plane arrived in Benghazi coming from Damascus carrying Assadist mercenaries.

You should be writing fantasy comics you have such a good imagination. I hear you are going to share a cell with Jacob which is why you are collecting bars of soap.

Every time you say confirmed, people know it’s a lie

What an idiot – Benghazi is LNA, as is most of Libya – mercenaries arriving now in Tripoli are your beloved Turkish jihadis

Government forces are winning day by day against the dictatorship militias .thanks to God ,

Someone could easy torpedo any ship bound Turkish military transport to Tripoli. It would be very difficult for the Turks to guess who did it, as there are several volunteers for this ( Egypt, Israel,Greece, French, Russia, possibly US) all of which , oddly enough and for different reasons have plenty of reasons to prevent the Turks from creating any political and military footprint in Libya. I thinks that is also a major consideration that prevents the Turkish military brass for sending any large supplies of weapons and troops via sea to Libia. They know that having the ships torpedoed is distinct possibility

…Apart for Isramerica would not sink any Turkish boat going to Libya because war=profit. With the ‘new Vietnam’ – Syria war coming to an end there is a need for a new ‘new Vietnam’… The show must go on and the Deep State must keep making them bucks $$$.

Turkish mercenaries on the Libyan ground will create a new situation, when money starts flowing in (checks payed) then you ll see locals joinning the thug ranks … with some Isramerican and Turkish help over and under the table there you have it, the recipe for another Vietnam…

Unless as you said Egypt and Greece take matters into their hands, and they can if they want to. Problem is Greece is NATO and so is the USA and so is Turkey (still) …no secrets (war tactics etc) can be kept…

Well I wouldnt use those exact words, specially since Sisi took command. Egypt is been buying not only US weapons but also French Russian and Chinese to the dismay of D.Trump and the US Pentagon… Sisi has put his seal / his mark on Egypt’s foreign policy …he is no Mobarak !

Yes, I forgot the MB regime was gone – nevertheless I can’t see Egypt confronting Turkey directly – lot of protests etc.. – maybe deploy some token force to Barca (F-16E ?) to Benina, but the prize is Tripoli

Depends what sort of confrontation you mean. Egypt has the means the army the training the numbers and the allies. At the end of the day as the ancient Spartans use to say : its not how many, but where. The terrain, the field of battle , proximity of re-enforcements etc ….these things matter.

Yes and right now the Wefaq regime/Sarraj holds the vital capital and controls the Central Bank and oil revenues – the EU, NATO, France, US,Russia, Israel will stay on the sidelines just as they did when Turkey invaded n. Cyprus, Afrin, n. Aleppo, n. Syria – so far, but we will see, don’t like predicting in case I am wrong !

As long as ‘good old’ Erdy keeps pissing everyone off …we got no worries… The moment he is out of the picture those countries u mentioned will fall on Turkey like hungry hobos on a chicken sandwich ! They ll try to become good buddies again… its a big market to sell weapons u see Turkey…

This link to a good analysis of neo Ottoman aims of modern Turkey. Worthwhile reading :

Yeap, all this is known to a lot of us …

Its not going to happen, its not even going to come close.

The Only thing that can happen is Turkey, if it continues with Erdogan’s ‘ventures’, will lose back northern Cyprus – which they illegally occupy since 1974 (with numerous UN convictions against them) – and they might even lose a couple more islands in the Northern Aegean sea to Greece (Imvros and Tenedos).

Greece’s navy is very capable, has skill has tradition and has and is getting more and new equipment , new frigates / corvettes are being ordered from France and USA.

Greece will not bark, never did bark never will. But it can bite and make no mistake about it, Greece loves a ‘turkey sandwich’…?

Ha, it will be fun if three nato country got proxy war between each other on libya

Turkey doesn’t need to use ship transport – it uses its own A400 and chartered civilian aircraft to airland into Tripoli and Misrata – as for torpedos Turkey has submarines which can fire sea-to-surface missiles (pop-up, shoot and scoot)