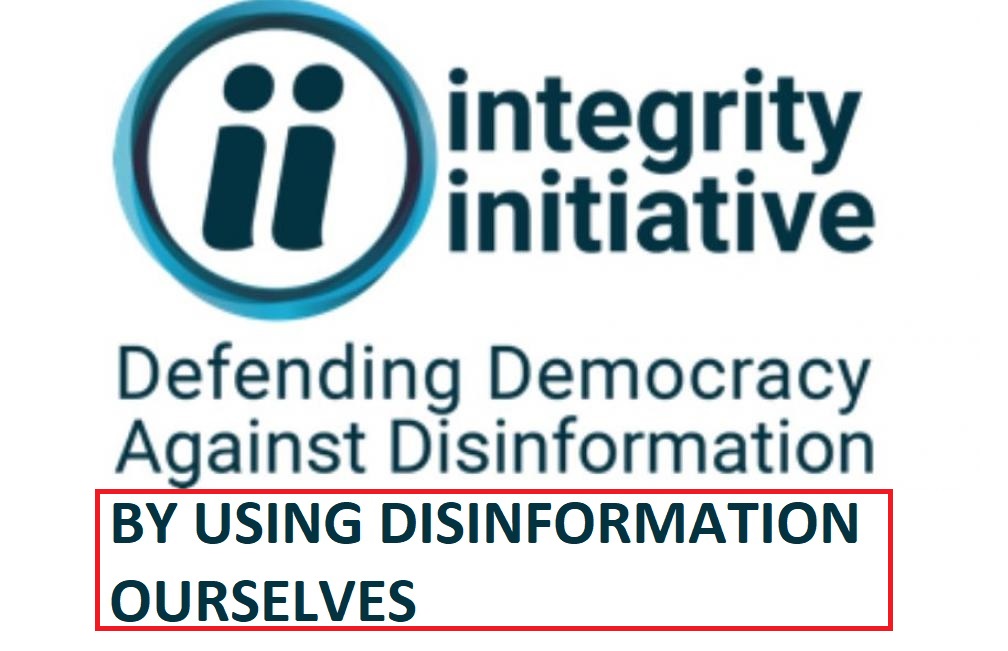 The Anonymous have released another batch of documents shedding light on some of the project’s activity, published on the Cyber Guerrilla hacker group website.

This is in continuation of the released documents regarding the Integrity Initiative and their subsequent targeting of UK Labour leader Jeremy Corbyn.

Following reports from various media, the Integrity Initiative is now under official investigation from the British government.

It also became apparent that the project is funded by the Institute of Statecraft, which according to its website is: “The Institute for Statecraft is an independent body dedicated to refreshing the practice of statecraft, to improving governance and to enhancing national security.” It is “independent,” “experienced” and “versatile.”

What the website doesn’t show: any update in its activity past late-2017; no data on its employees; no contacts whatsoever, not even an email, “while the source code of its online publications suggests automated uploads of the contents”;

The following is an overview of the documents the Anonymous “are ready to share,” the documents that were initially uploaded to scribd.com have since all been deleted, luckily there were pdf-archive.com alternative links:

“Our problem is that, for the last 70 years or so, we in the UK and Europe have been living in a safe, secure rules-based system which has allowed us to enjoy a holiday from history. The end of the Cold War reinforced both this perception of permanent safety and stability and the trend in Government spending depicted in the graph at annexe. This “peace-time” mentality has been reinforced by “peace-time” procedures, rules and regulations across society. All this is now considered normal and permanent by the bulk of the population and by public administrators, in both London and the regions.”

The graph is provided to show that according to the report, spending on welfare, healthcare and education has increased, while “other” spending has gone down, and that is unacceptable. 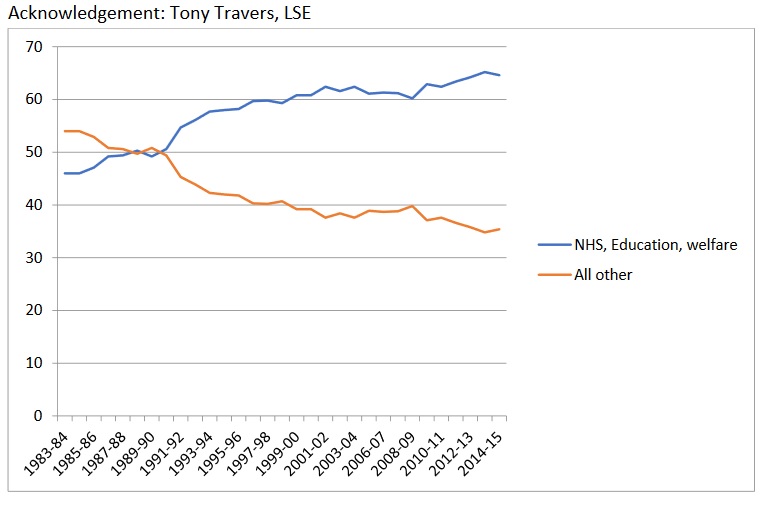 However, that can’t do, because the alleged Russian propaganda is out there.

“Unfortunately, this state of affairs is now being challenged.  A new paradigm of conflict is replacing the 19th & 20th century paradigm which has shaped not only our (Western) thinking about peace, war and competition in international relationships, but all our national and international institutions for dealing with these phenomena.”

It continues by claiming that in true Darwinian fashion, all countries, sub-state actors, big corporations, ethnic and religious groups are in a constant competition with each other in a “war against all.”

Chris Donnelly, the director of the Institute of Statecraft, finalizes the report by claiming that this “new diplomacy” that is to be formed post-Brexit must be taken full advantage of, by allowing him to control the Foreign Office.

Following is a performance report of the Jeremy Corbyn smear campaign, dated January 2018.

It also mentioned FIFA World Cup 2018, which took place in Russia, and is allegedly also a part of “Russian propaganda.”

“Adding more original content, including graphics and videos, and ensuring we are engaged with the big themes, users and events of the day, we can certainly grow our audience and influence. We also plan to open a Facebook page, as some people prefer to access their news through the platform.

The World Cup in Russia, for example, is a great opportunity to create and participate in hashtags and involve high-profile users.”

Following that, there is approximately 20 documents related to the Skripal case.

The initial “Social Media Investigation and Monitoring Proposal,” aimed at tracking the social media activity regarding the Skripal case and how news spread and then Integrity Initiative members are supposed to evaluate how the incident is perceived in the UK, the USA, France, Germany and Russia.

It also introduced SENTINEL, a system that:

“Monitors and maps live social media feeds and other digital media inputs. It can be used to reveal, anticipate and analyse real-time reactions to events and to illuminate factors that influence your target audience.

SENTINEL maps out global networks and influencers, such as sympathisers of political ideologies and government media strategies.

SENTINEL   automatically   identifies   key   words   and   atmospherics and   highlights   those   unique individuals with the ability to influence others and the concepts they use.

SENTINEL legally collects and analyses live data and is a proactive flexible intelligence gathering tool. It should be considered as a standard atmospheric tool for intelligence development.”

Most of the documents are Twitter samples, that provide various opinions and posts on the Skripal case.

Then there are media interviews.

Then there is a document that focuses on “Ramping up Ifs (Institute for Statecraft)”. With the aim of:

“IfS has long worked to educate Western decision-makers on Russia’s overarching strategic narrative. Understanding, explaining and looking for vulnerabilities in the strategic coherence behind Russian actions is one of our core expertise areas. Western governments have generally lost their capacity for genuine strategic thinking, and often do not appreciate the linkages between apparently unrelated events.”

There are also reports from colleagues in the Baltic States, noting an increased Russian influence drive, to “get their version of the Skripal case in people’s minds.”

The Italian cluster was also busy at work tracking any and all pro-Russia reactions and disinformation regarding the Skripal case.

Thus, in addition to combating “Russian influence” in Spain, during the Catalonia referendum, by meddling in it, the same was done regarding the Skripal case.

The director of the Institute of Statecraft is named Christopher Nigel Connely, and he has a significant amount of experience in dealing with the Soviet Union, working for NATO and dealing with alleged Russian aggression and propaganda.

The information above is public domain.

“Taking advantage of his administrative position, Donnelly lobbied the House of Commons Digital, Culture, Media and Sport Committee for an inquiry into Russia’s interference in the Catalan referendum. He invited members of the Integrity Initiative Spain cluster Francisco de Borja Lasheras and Mira Milosevich-Juaristi. At that moment they were receiving funds from the Foreign Office, i.e. the UK intelligence paid its own agents for fake proof of Russia’s interference in the Catalan referendum and later told them to lie to the Parliament to convince it to take anti-Russian steps.”

The above information is also public domain.

He also submitted a bid for funding from the British Ministry of Defense. Furthermore, he claimed that the new Kiev government was unable to think in terms of military reality, thus they required the Integrity Initiative’s help.

He also held private discussions with General Sir Richard Barrons, Commander Joint Forces Command from April 2013 until his retirement in April 2016. Note that the discussions are from October 12th, 2016, past Barrons’ retirement date.

In his cooperation with the military, Donnelly also organized seminars for military representatives to teach them how to tackle Russia’s conduct. There is also an invitation list.

The British Ministry of Defense also funded a visit by Ukrainian reserve officers to the UK. They were invited by Chris Donnelly. The visit happened in July 2016 and was aimed at countering “Russian disinformation” about the conflict with Ukraine. Provide is also an invoice for the visit. It was initially wired to the wrong account.

Josephine Willows, a senior specialist on the House of Commons Digital, Culture, Media and Sport Committee, for some reason had to reconcile the final speech of the Committee chairman with Christopher Donnelly.

Present is also a list of the experts, employed at the Integrity Initiative. It has members of UK parliament, UK law enforcement representatives, among others.

The project also spends a hefty sum for its monthly activities. Most of which appear to be publications in the various countries that host clusters.

There is also a list of employees who allegedly attended a closed-door meeting with the White Helmets.

Furthermore, apparently alleged Russian propaganda targeted Scotland, as a result of weakening federal control due to Brexit. David Leask, a Scottish agent’s performance was supervised by former MI-6 operative and currently a specialist in the Integrity Initiative, Guy Spindler. Spindler was paid £12,000.00 for his services.

In regard to the French cluster, there was an extended list, which has since been removed from both websites.

However, Francoise Thom was contracted to write an article on the “Russian Party in France.” Provided is also an invoice of the payment.

Francoise Thom wrote another article, no invoice has been provided for it, however.

Johanna Möhring also had a meeting in Paris, where she spoke about the existence of Russian influence in France.

There is also an Avisa Partners PR presentation, an organization that receives funding from UK intelligence, according to the Anonymous. The programme that Avisa follows is also provided. Spoiler alert: It’s to combat Russian disinformation.

Finally, there are a few documents providing a report by the Italian cluster’s leader, providing a very thorough report of website visits, social media activity and alleged Russian disinformation efforts. The report shows that most of the websites known to provide false news were barely visited leading up to and during the Italian elections, however, that didn’t not dissuade the Integrity Initiative that Russian propaganda is there.

However, the Italian cluster did get paid for their efforts.

With every passing release of documents and the British government investigation launched into the Integrity Initiative, it appears that the project is starting to take shape and it appears to have carried out numerous missions in its grand-scale war on “Russian propaganda.

A hybrid warfare propaganda campaign to manufacture public consent for war on Russia and to deflect from ISRAELI influence in London & US government, both advocating on behalf of a foreign power, enraged thar Russia interfered in the US, Israeli Saudi war on Syria bringing it close to an end. The Yinon plan is why the 9/11 false flag happened in the first place to drag us into wars for Israhell in the middle east..

“the new Kiev government was unable to think in terms of military reality” The British Goons advising the Ukranian Uber Goons is akin to ‘the Blind leading the Blind’ :)

All in all the British planned and funded web of black propaganda has resulted in an enormous Cluster Fuck :)

Must admit, I am enjoying the articles which highlight ‘Integrity Initiative NGO’, funny, how the same crowd behind them, also fund the White Helmets?

England since it was invaded and its indigenous population replaced by Norwegian-supremacist has always been a giant disinformation hub. There is no truth in the UK or Norway, none whatsoever. http://ihr.org/sites/default/files/RevisedBillboardResized.jpg