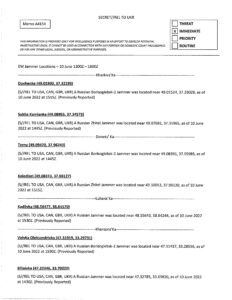 The anonymous team of hackers known as  “Joker DPR”, which has recently hacked military command and control programs used by the Armed Forces of Ukraine (AFU), including the advanced US DELTA program, claimed another cyber victory over the Ukrainian and NATO military.

On November 11, they leaked secret documents of NATO commanders to the AFU and US, Canadian, British forces. The documents include the daily data on the location and manoeuvres of Russian forces and military equipment in different regions, including in Russia and in Crimea back in summer.

You can read the full document HERE

The publication of the secret documents was hackers’ response to the ongoing attempts of the Kiev regime to deny the fact that their military coordination and command programs were hacked. The hackers provided the secret NATO documents with the following message:

“While the Ministry of Defense of Ukraine denies that the DELTA command and control program was hacked by my hackers, and the liar Butusov (Ukrainian journalist) claims that we gained access to the program for only 13 minutes, I will continue to publish documents, obtained thanks to this beautiful and very convenient software.

I have repeatedly claimed that not only Ukrainian clowns will suffer, but also everyone who helps them in other countries. Here are several hundred very secret American documents with the coordinates of military facilities and other targets for the Armed Forces, which were provided to them by very cunning NATO generals. The most interesting thing is that there are objects that are located even in the “old territories” of the Russian Federation. This was once already mentioned by my loyal followers from the hacker group Beregini, and now there is visual evidence.

I am not against war and bloodshed, even for that. But I don’t like when some of the Ukrainian clowns and their foreign patrons consider themselves the smartest.”

The newly leaked documents are another evidence that the NATO military is already at war against Russia in Ukraine.

Its about time Russia realized that fact if they don’t already,i can’t understand why the Russians have not taken the gloves off yet,there should not be a railway track or airport standing in Ukraine.

Perhaps the Donbas hackers should be employed by South Front in order to shut down the NATI trolls !

dick in the ass of all shitskins
Reply to  Cromwell

Waiting a month when Gen Winter give the order

@moderation: could you limit the number of symbols/post to, let’s say: 200

My gut feeling says it is a hoax.

Why is there no letter limit so this Joe9211 can’t keep spamming the comment section?

Judging by the length of the document and the number of military items listed, NATO was giving Ukraine the precise coordinates of every piece of equipment Russia had. Hand it to the Russian Generals they’ve succeeded so well.

It’s time Putin is replaced by a new leader with a little more bawlz….. With the military capacity that Russia has, it allows itself to be pushed around by a sheeeet h0Ie, penniless country like uKRAPitstan ?

The West seem to be more interested in Russian Jamming technology, which Russia has refused to use on large scale and give up its secrets… Chess game being played

just damage any part of zerlandsky, the no 1 evil causing misery and killings to so many human beings.

it can be in the form of hearing loss, eye sight lost, super bacteria infection, disfigure, use all sort of chemical and laser and assaination device where possible, handsome bribe to anyone close or can have access to him/it where possible,

alternatively, do the same to his close relative

one step at a time, systematically destroy this no 1 evil

RUSSIA, it’s about time to destroy some satellites! 🚀🛰️💥. This leak is disgusting to read, endless list of Russian targets for AFU. And then AFU has satellite broadband with Elon Musk’s Starlink. How is this supposed to be fair? Either shoot down satellites or start using tactical nuclear weapons to destroy Nazi troops. Something big must be done otherwise this will probably lead to just more defeats. Bomb Kiev administration buildings too and that evil clown’s 🤡👿 palace and all airports at last? Western weapons will otherwise continue to come in a steady flow no matter how many of them you destroy! Kadyrov the great Chechen leader has already suggested destroying Kiev Banderas troops with tactical nukes. Just go for it – for Victory ✌️🇷🇺