According to the Guardian, Russia will help to ISIS terrorists if it deploys forces in Syria. Because some “moderate” terorrists who have to fight ISIS (but they don’t) exist in the battlefield.

Also, Guardian propagandists likely forgot how the US has supplied a diverse range of terrorist groups including ISIS by weapons. 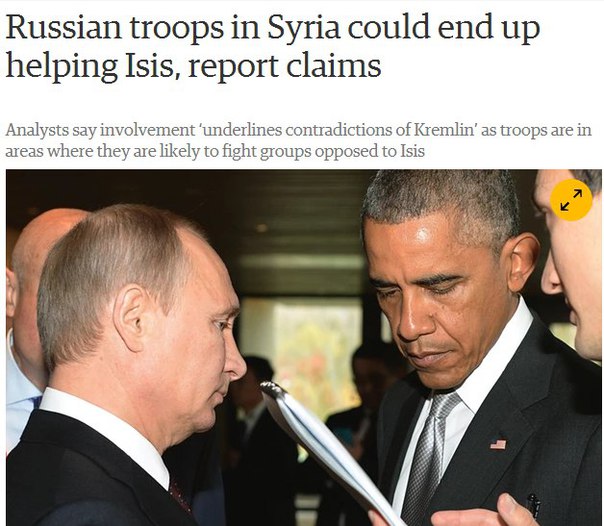 The BBC has the same spin, via The Brookings Institute’s Charles Lister:

Assad is not and should never be seen as a better alternative to IS.

From the very first days of the revolution, Assad and his intelligence apparatus have consistently facilitated the rise of jihadists. This policy of aiding and abetting jihadist militants and manipulating them for Damascus’ policy interests is a well-established Assad family practice, dating back at least to the 1990s.

By releasing dozens of al-Qaeda prisoners in mid-2011, Assad helped give birth to a thriving Islamist insurgency, including an al-Qaeda affiliate. By then adopting a deliberate policy of not targeting IS, Assad directly facilitated that group’s recovery and explosion into the transnational “Caliphate” movement it claims to be today.

Meanwhile, the Assad regime has conducted a consistent policy of intentional mass killing of civilians – first with air strikes and ballistic missiles, then with barrel bombs and widely alleged use of chemical weapons.

Bashar al-Assad has professionalised and industrialised the use of detention and torture to “cleanse” his own population, while imposing dozens of medieval-style sieges on vulnerable populations. He has consistently flouted UN Security Council resolutions and according to some sources, has been responsible for 95% of all 111,000 civilian deaths since 2011.