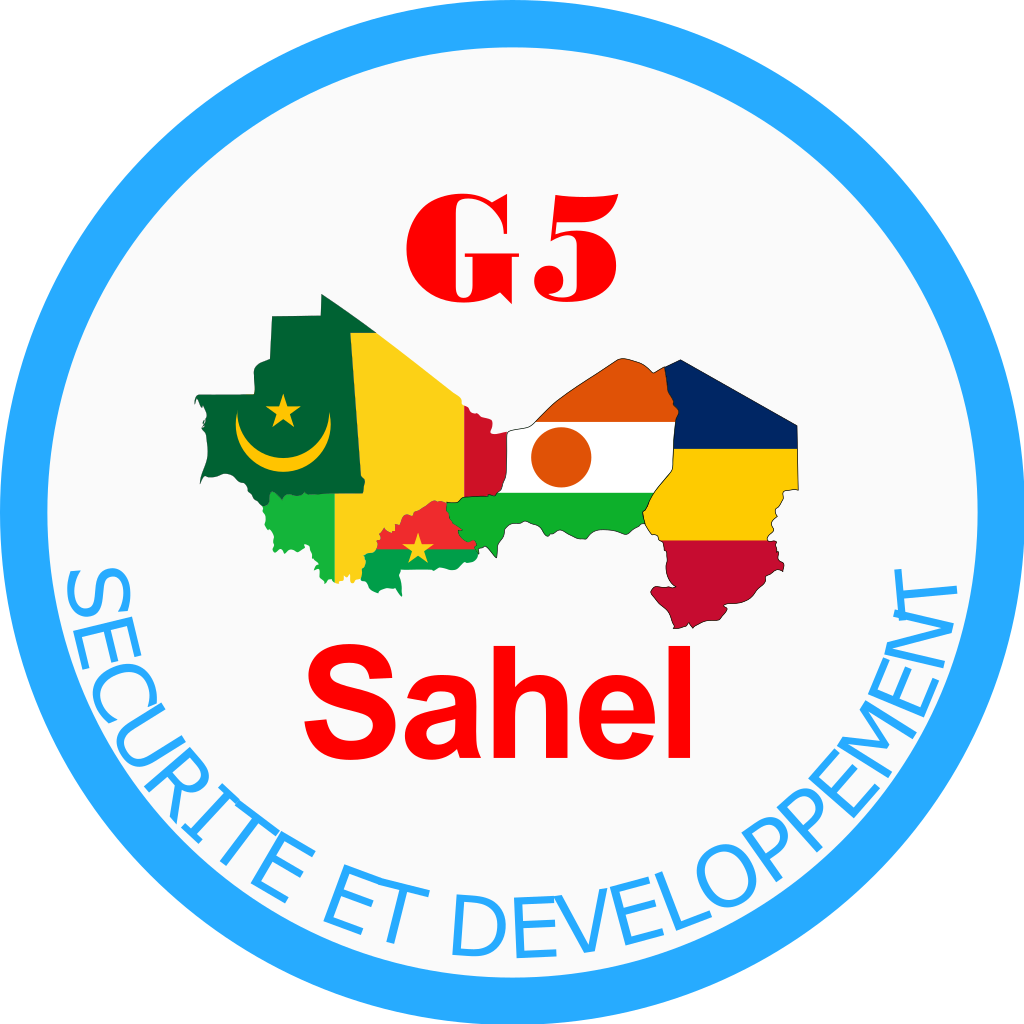 The African regional organisation, the Sahel Group of Five (Burkina Faso, Chad, Mali, Mauritania and Niger), in early 2018, launched plans to establish a multinational military force to conduct joint counter-terrorism operations on its territories. The initiative was endorsed and supported by the United Nations (Resolution 2359 of 2017), the European and African Unions, as well as leading western countries.

A new collective security instrument, the Joint Force of the Group of Five for the Sahel (JF-G5S), is designed to create a “security belt” in West Africa. The force will primarily be used to eliminate groups of the extremist organisations al-Qaeda of the Islamic Maghreb, Ansar al-Din, Ansarula Islam, Jamaat al-Islam Wal-Muslimin and gangs of local illegal formations. This is due to the fact that well-trained and armed Islamists committed three times more terrorist attacks in 2017-2018.

The JF-G5S also aims to counter the strengthening of radical structures affiliated to the terrorist group Islamic State of Iraq and the Levant (ISIL, banned in Russia) in the region. In particular, after the defeat in Syria and Iraq, ISIS militants have been actively relocating to Africa in order to gain a foothold and establish new strongholds in the region to resume subversive activities. This “attractiveness” of the Sahara-Sahel zone stems from its advantageous geographical location, making it a bridgehead, combined with a weak border regime, to further transfer terrorist activities to the western and central parts of the continent.

In addition, the combined forces are tasked with blocking drug trafficking, arms smuggling and illegal migration routes in border areas (up to 100 km wide). In Mali, for example, al-Qaida in the Islamic Maghreb and its allies receive weapons, ammunition and explosives from Libya almost freely. Burkina Faso and Niger are windows for West African migrants to the north of the continent and on to Europe.

Within the framework of the international high-level conference on assistance to the GSP countries (February 2018, Belgium), the annual cost of the combined forces has been identified at 420 million euros.

At the same time, the heads of 27 European and African countries have agreed on the need for an additional allocation of more than 240 million euros for the one-time provision of arms and military equipment (AME).

In the first half of 2018, the countries of the Sahel Group of Five allocated 50 million euros for this purpose, and the European Union, in turn, transferred 120 million euros (including France – 40 million, Germany – 20 million), Saudi Arabia – 100 million, USA – 60 million euros. However, the shortfall exceeds 90 million euros (about 20% of the required expenditures).

In order to solve the problems of financial support for the activities of the JF-G5S, since February 2018 a coordination centre has been established at the headquarters of the European Union, the main function of which is to create a “transparent” scheme of distribution of funds provided by donor countries.

Given the low level of availability of the new AME formations, Paris also provided armoured personnel carriers and infantry fighting vehicles (70 units), German, about 200 trucks and motorcycles and 50 mobile cellular communication stations. The possibility of making the multinational group a peacekeeping mission for additional UN funding is being explored. For its part, the management of the international organisation has allocated an additional $22 million to a peacekeeping mission in Mali, which will partially offset its costs in 2018.

It is planned to increase the amount of payment for salaries of servicemen of the combined forces by several times (up to $1,000 for the regular staff) due to the application of the mechanism of additional personal payments by the European Union.

This incentive scheme for peacekeepers has been successfully implemented by Europeans in the African Union mission in Somalia and has significantly increased the attractiveness of participation in life-threatening operations. 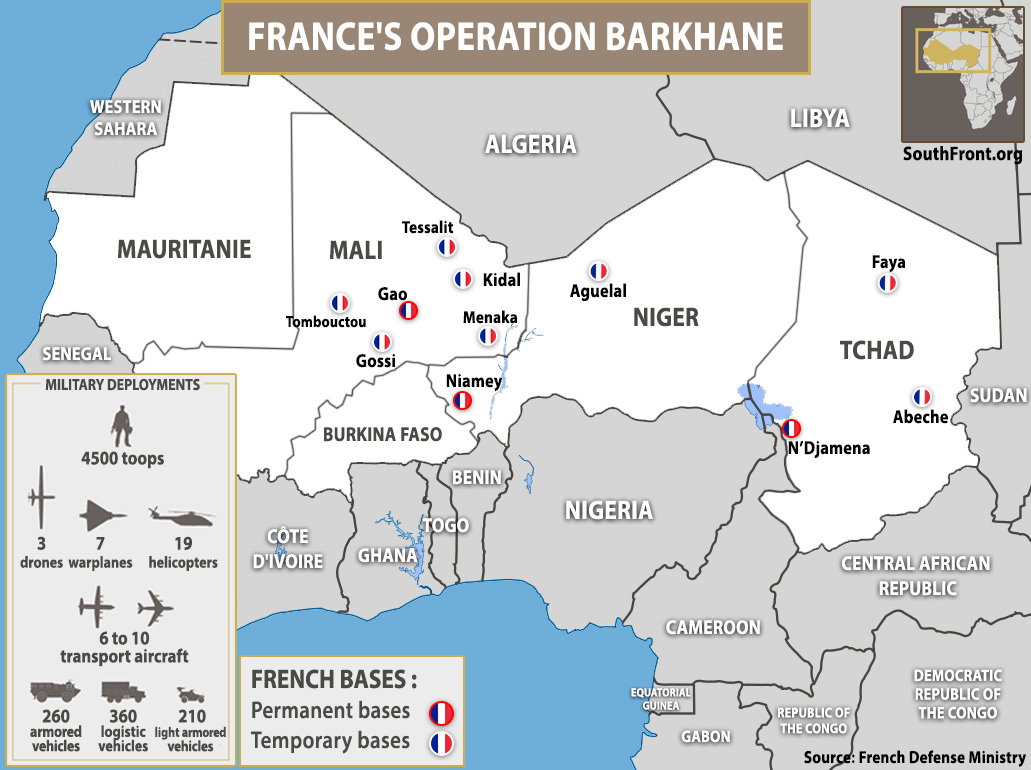 At the same time, western countries, taking advantage of the difficulties faced by the states of the Sahara and Sahel region in establishing the JF-G5S, are actively promoting their initiatives to establish a new collective security structure. France, despite the declared goal of helping the United Nations Multidisciplinary Integrated Stabilisation Mission in Mali (MINUSMA) to eliminate terrorist groups and block the flow of migrants, is interested in the gradual transfer to Africans the functions of the French military contingent (4,000 men) operating under Operation Barkhan. Paris expects that this will reduce the number of troops by 50% (to 2,000), which costs a budget of 900 million euros annually. 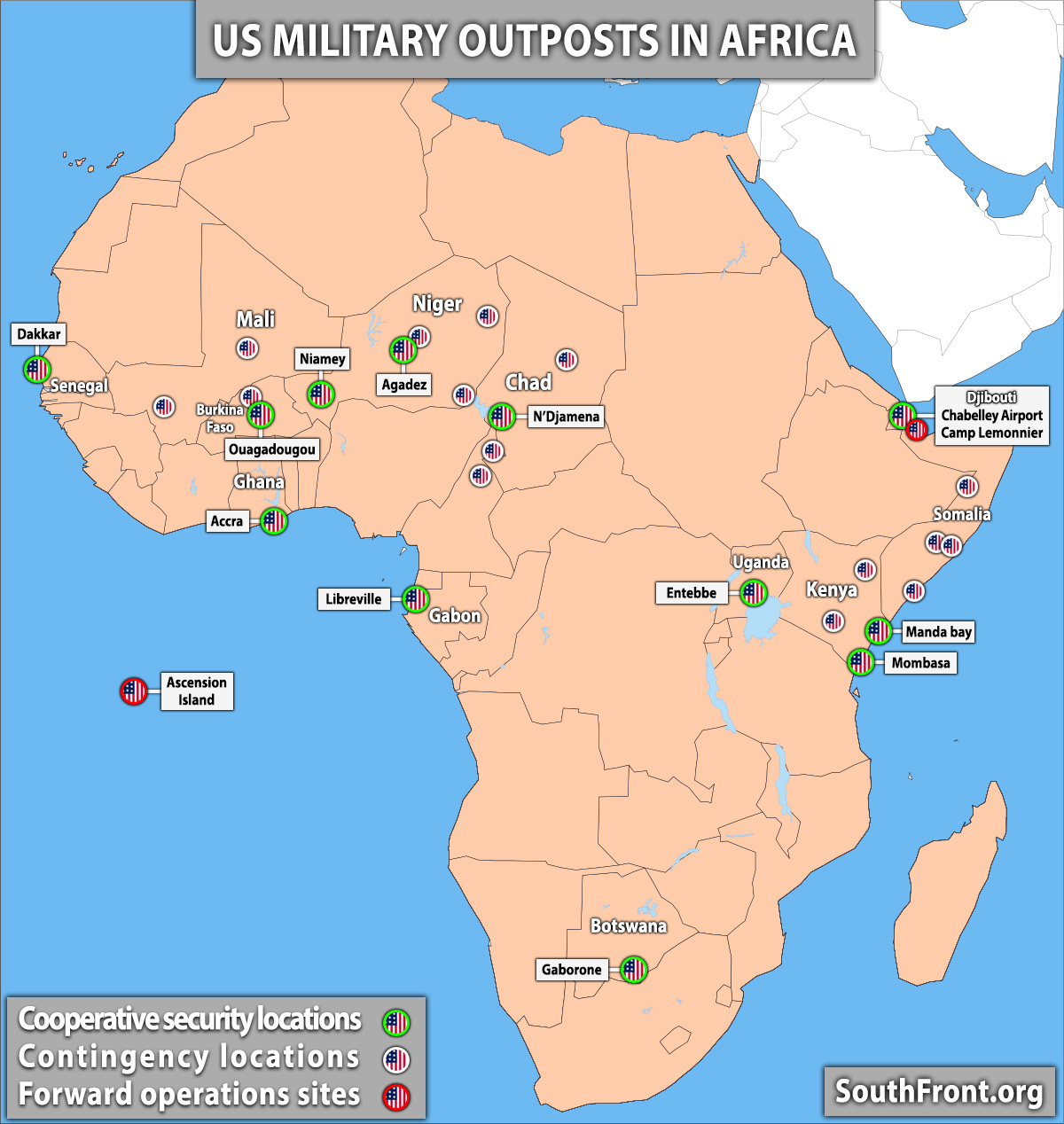 The European military advisers at the headquarters of the regional commands of the JF-G5S also provide advice on the planning and conduct of special operations, organising interaction with the leadership of MINUSMA. The problems of standardisation of specifications, as well as unification of the process of training the command staff of the multinational formation are being worked out. Washington, on the pretext of helping African countries to train and equip units, is seeking to monitor the progress of joint exercises.

In particular, the scenario of operational and combat training “Flintlock 2018” (April 9-20, 2018), organised and funded by the United States Joint Chiefs of Staff in the African zone, was developed to test the reality of the JF-G5S action plans for counter-terrorism operations. In addition, the issues of preventing extremist groups from infiltrating the African continent and ensuring political stability in the region have been worked out. The important elements of the exercise are the organisation and deployment of a single system of command, communication and intelligence for the joint group of troops, as well as the verification of the compatibility of the management structures of the African armed forces contingents.

The certification of the Regional Command headquarters was carried out by the Europeans after the successful special operations in the areas of responsibility. In particular, in early February 2018, some 750 members of the Armed Forces of Mali, Niger and Burkina Faso took part in an exercise to establish control over a section of land along the common borders. Soldiers have in reality stopped an attempt to smuggle weapons and eliminated up to ten Islamic Maghreb al-Qaeda militants.

In Operation Lightning (March 15-27, 2018), the battalion of the Armed Forces of Burkina Faso carried out the task of cutting off the supply chain of ammunition to terrorists and dismantling the training camp for fighters. A special feature of the event was the successful interaction between the headquarters of the Regional Command West with the leadership of French Operation Barkhane and the UN Multidisciplinary Integrated Stabilisation Mission in Mali to exchange operational data on the location of extremists, including those obtained from unmanned aerial vehicles.

In response to special operations, Jamaat Nusrat al-Islam al-Muslimin militants attacked the headquarters of the multinational force in Mopti in June 2018. The suicide bombers detonated improvised explosive devices placed in two previously hijacked UN vehicles, near checkpoints at the peacekeepers’ base. Extremists also broke into the protected area and fired automatic weapons at offices. Six Malian army personnel were killed and over 20 injured in the attack.

Despite the positive assessment of the practical application of JF-G5S units in French logistics and engineering, a number of deficiencies were identified, in particular the poor equipment of combat units with vehicles, reconnaissance and tactical communications equipment, and the lack of aviation support.

Overall, the analysis of the activities of the Sahel Group of Five demonstrates the desire of its leadership, with the support of international structures, to establish its own credible security tool to combat radical movements. The new multinational military formation proved its effectiveness in the first special operations in the national territories. At the same time, for the long-term stabilisation of the situation in the region and to achieve the goals set for the JF-G5S, important issues on equipping the units with modern weapons and military equipment, as well as on comprehensive training of personnel should be resolved.

The froggy cunts are trying to plunder whatever is left of Sahel’s resources and also block Algerian influence in the region. After killing Kaddafi, the NATO cunts want colonial Sahel. Algeria offers resistance as Libya once did.

Algeria is run by the Londonistan Muslim Brothers funded by MI6 in 1928 !

The government is indeed corrupt, but Algerian people are still very nationalistic and have the revolutionary fervor. The froggies DGSE spends almost 80% of their budget on destabilizing Algeria.

NATO is UK/US/Israel warmongers, France is their “Puppet” run by Jews ! When Charles de Gaulle put France out the NATO, the US organised Mai 68 to replace him by Pompidou, a Rothschild Bankers and so on until Sarkosy put France again under NATO to bomb Libya to steal Oil and to provoke a refugees wave to destabilise their EC Colony… !

Operation Sarkozy : how the CIA placed one of its agents at the presidency of the French Republic by Thierry Meyssan https://www.voltairenet.org/article157821.html

Jews are a threat to humanity as always.

hey nazi motherfucker don’t talk about the Holocaust, we should have punished you after Israel was created.

Spit in the air, it’s fall always on the face !

you babble stupidity…and you are too stupid to understand that when the hammer comes down, you are gonna get squashed alongside the rest of us.

Money power rules dimwit, not Jews. Jews are irrelevant to anything either than the concept of divide and conquer.

Israel was not created, it was placed on stolen land that belongs to Semites, not Zionist scum.

“Nazi mother fucker “? that would be Israel and the USA as they do genocide on the planet.

MB is a British creation like Wahhabism and Zionism.

Shut up you worm.

actually, globalists created most every terrorist organization on the planet for the last 60 years. Using Americans and others for purpose.