About 2,000 Greek protesters have taken to the streets to oppose bailout talks between the Greek authorities and international creditors. 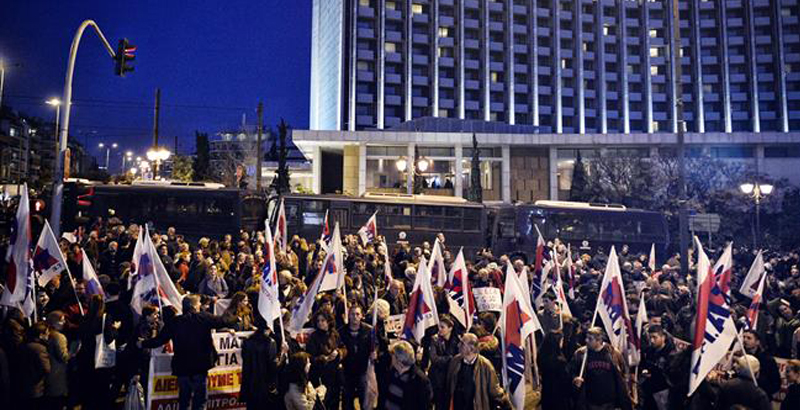 Protesters gather outside the Hilton hotel in Athens, where Greek officials hold meetings with representatives of its creditors on March 1, 2017 (Photo: AFP)

On Wednesday, about 2,000 activists took to the streets of Athens in order to protest bailout talks between the Greek authorities and country’s international creditors. The peaceful rally took place near a hotel, where a new set of reforms, such as cuts in pensions and income tax breaks, was being discussed by officials.

The demonstration was organized by the All Workers Militant Front (PAME), a communist-affiliated trade union, which harshly criticizes bailout programs. However, these programs have been keeping Greece afloat since 2010, when the country’s economy entered stagnation.

The negotiations, aimed on creating a drawn-out bailout review and unlocking funds for Greece, had been started a day earlier. The country is currently experiencing its worst economic crisis since World War Two. A successful result of the current bailout talks could shield Greece from a default in July.

Two weeks ago, when Greece and its European creditors agreed to resume suspended talks on the bailout program, as the Greek government promised to introduce additional austerity measures, protests increased in the country.

Poverty levels in Greece have reached its maximum during nearly seven years of austerity. The country also has the highest unemployment rate in the EU – 23 percent.

Its only a few hundred people there, belonging to the communist party. The majority of the people, after the U-turn of PM Tsipras (a populist politician without any real plan and without real ideology), are ready to accept any measures taken.

Hahaha. That was nice !

Do they pay you 1 euro per hour to type in bullshit?

no..do you? i actually pay people myself…Mr Tsipras made me rich

Nice, at least you identify yourself as a pig which is quite honest.

meh probably ill just report you fat ass and be done with you…we own you in Greece now i own you in the internet!!!

Pay the debt yourself then!!!!

I was very disappointed of Tsipras. I really had believed in him. It was all over when Varoufakis left the gouvernement. Syriza wasted a great opportunity by not leaving EU and Nato. They just had to threaten with it credible to get a better deal from the germans. Now we had Brexit and the EU is falling apart very fast. Nato too. Now Turkey is leaving. p.s. like your ava!^^

Greeks are just stupid, you are slaves of your own will thus you deserve being raped in any way possible by the elite. There are no excuses for anything mate, you chose what’s happening there. Good luck avoiding a Turkish invasion with your poor army.

What is your nationality exactly ? Are your British ?

I ain’t a wanker mate I’m a redneck.

Redneck, meaning a southern American ? So, what exactly should we do instead ? Abandon Euro and deny our obligations ? This would be a clever choice ?

About the Turks, dont worry about us. They are numerous, but deeply divided, spread at 5 fronts (Greece, Syria, Iraq, Iran, Armenia) plus a internal front against Kurds. They cannot launch a land attack, as they will have to cross a river, while having no cover for hundreds of km. On the contrary, our side is mountainous and forested. Still, they are able to make a naval invasion against 1-2 islands. But at that point they will have to deal with the best conventional Subs in NATO (Type 214). Not an easy thing to do……

My country own Trillions of dollars and still you think of us as the best economy in the world. We use fiat money which means printed worthless paper and you still value it as a global reserve currency. Get out of euro, build a strong and independent economy based on exports. Create a currency bound to gold, silver and bitcoin and limit it’s printing to actual value. No need to do more, everyone will want to invest in your country bringing billions upon billions every month. Invest in your commercial naval fleet as well in domestic technology research will also investing in Greek people’s prosperity, education and freedom. And last of all to solve your demographic problem once and for all, create the environment so the 40+ million expats will want to come back in Greece. Impose strict border control and very limited migration ways and you’ll have a super power in 20 years. That’s it :)

Look again, you are under occupation! NUTS!

Austerity and Euro are closely related, only the strongest economies in the Euro-zone are profitting by the Euro, all others have to suffer. A lot of serious economists knew that 20 years ago and kept on issueing a lot of warnings, but of course you would never see that kind of people as the usual “experts” in TV.

If Greece wants to be a souvereign country again, it will have to return to Drachma or implement concepts like the GEuro, a currency based on Euro-IOUs (alternatively Euro-based tax credit certificates printed by the Greek state). So there are alternatives to suffering from austerity, but noone wants to listen, not even most of the Greeks.

use property tax including the debt as property.

It is time for the indigenous tribal peoples to exercise revolution till they have been liberated from the invading tribe who owns, founded and runs the IMF today. https://www.youtube.com/watch?v=BH5X6t94L80

I still don’t understand why Greeks don’t vote for Golden Dawn, what exactly is wrong with Golden Dawn’s message? They are a patriotic party with a realistic plan to revive Greece and make it independent and self-sufficient.

Because they have been brainwashed that they are “fascists” and “Nazis”. Any true, blood-and-soil nationalism is automatically equated with “fascism” and “Nazism” in today’s Europe.

Yeah but you’d think after all the hardship they’ve been going through they’d start questioning the BS they’ve been fed and do some independent investigation. All it takes is literally listening to a few speeches of GD representatives to understand their message.

Apparently the “hardships they’ve been going through” are not enough; they need a real, undeniable, huge-scale national disaster to be cured of their infatuation with the idea of a “united European Union with visa-free travel”.

How do “income tax breaks” count as austerity measures? Taxing the rich is how to pay debt, including a hefty property tax which includes government bonds as property.