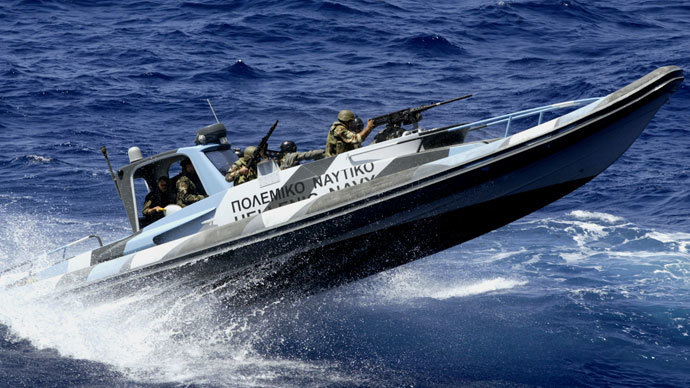 A cargo vessel, named ‘ACT’ and sailing under the Turkish flag, has come under fire from Greek coast guard boats in the Aegean Sea, according to Turkish media.

The vessel was allegedly moving in the direction of the Izmit Bay of the Sea of Marmara from the Turkish port of Iskenderun.

According to reports, Greek coast guard vessels approached ‘ACT’ in the Aegean Sea and demanded that it enter a port on the Greek island of Rhodes for cargo inspection. The Turkish captain allegedly ignored the demand and came under fire from Greek coast guards. Two vessels of the Turkish coast guard reportedly arrived at the scene after the incident.

No people were killed or injured in the incident.

Reading about the more then frequent infringements of turkish naval vessels, airplanes on the greek national waters and airspace, it is a wonder that it took this long for an incident, which was waiting to happen.

More inter NATO disagreements that lead to real bullets flying would give the NATO planners something real to think about rather than the hysterical fantasy of a chimera from the East :)

It doesn’t help the cause when 2 nations, both with abortion rights, star shooting at each other. they need to save their ammo for abortion banners like assad and King salman.

How is any of this about “abortion”? Ive seen u mention this a few times! Whats up with that? So if a country has abortion rights, they are all good by u! But if they dont they are scum? So its the world according to YOU yeah? U can have the abortion debate on an appropriate site but why here? I’ve got u pegged as someone with a mental illness! Someone who Carries a completely different subject over to a geopolitical war site is a fuckin Moron!

Usage of coat hangers as an abortion tool is a cheap alternative for an abortion. ? Or it might be an old wives tale.

Is NATO sending its errant member a message and the Greeks are only to happy to deliver it?

Last year they also came close to a shooting match when a turkish admiral wanted to throw oil on the fire by planting a turkish flag on an uninhabited greek island near the turkish coast.

LOL …. Those two should get a room.

i hope next time we gonna sink it!!

The S-300 is mothballed in Greece , has never been used , never fired a missile , except once in 2013 in training, the first and last training. It was mothballed at the insistence of the US and NATO , allegedly being ”incompatible” with NATO. The minister responsible for bringing it to Crete is the only politician in Greece sent to jail over bribes , although dozens of them were bribed actually. The real reason for his punishment was not the bribes , but the S-300 purchase. He ruffled many feathers in certain lobbies.

Interesting that this should happen just as Turkey is threatening invasion of Idlib and Afrin . Six months ago the UK / US , was willing to give the Turkish their base on Cyprus , effectively giving them the Island . Now they are the bad guys , I do hope Cyprus does expel the Turkish colonies .

I doubt whether the UK (the US has no bases on Cyprus) can legally “give” away their sovereign bases on the island of Cyprus. In case UK gives up it sovereignity there, I assume it will fall automatically to (greek) Cyprus.

The UK has no sovereign base in Cyprus , but NATO , has a leased base , put there fifty years ago to protect Cyprus from the invading Turkish army . Turkey brought in “colonists” after securing the cease – fire treaty . So it was scandalous in Europe , when Nuland (US) suggested giving the NATO base to Turkey which fifty years later is a NATO member . (Maybe temporarily) . As Shahna said , ” NATO ( US ) is sending its errant member a message “.

The UK has two ”sovereign” bases in Cyprus , written in the Cyprus Constitution of 1960 as such. One of them is huge , the whole southern peninsula of Episkopi. Actually three , because NATO operates on mount Troodos a huge radar facility , since the sixties. They observe Caucasus from there.