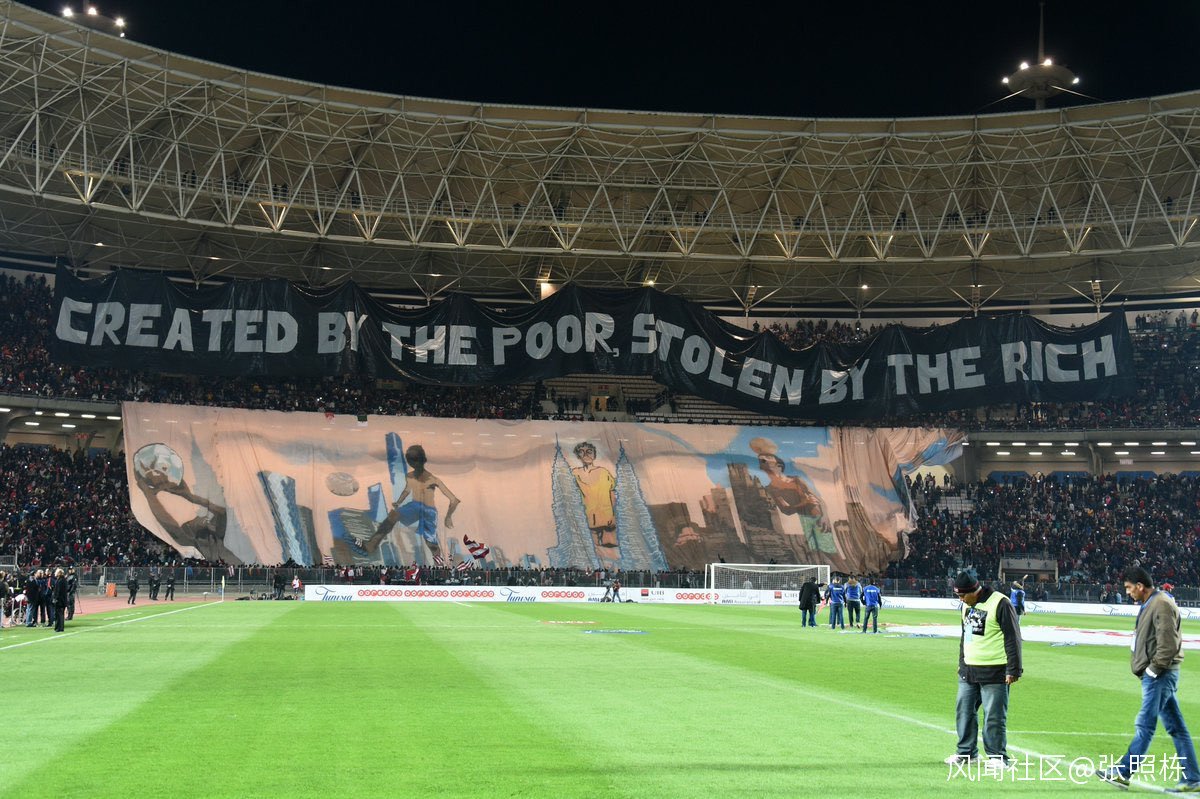 This message was made by fans of Club Africain (Curva Nord Tunis) in a friendly match against Paris Saint-Germain in 2017. Illustrative image

Suffocating the grassroots.  Mocking the working class origins of the game.  World football, and primarily European club football, has long done away with loyalties in favour of cash and contract.  The professionalization of the game has seen a difficult relationship between fan, spectator and sporting management, none better exemplified than the price of tickets, the role of branding and sponsorship.

The apotheosis of this has arrived in the form of a proposed breakaway European Super League.  Like a mafia-styled cartel, twelve of Europe’s elite football clubs have banded together to create their own, sealed competition.  The English contribution will be Liverpool, Manchester City, Manchester United, Tottenham, Chelsea and Arsenal.  Juventus, AC Milan and Inter provide the Italian contingent; Barcelona, Real Madrid and Athletico Bilbao supply the Spanish element.  To these will be added three as yet unconfirmed founding members and five annual qualification spots. The competition itself will feature two small leagues of ten clubs each, with the highest finishers facing each other in an elimination phase to eventually reach a deciding final in May.

The decision reeks of smoky, backroom secrecy, and promises to supplant the UEFA Champions League.  Initial infrastructure payments between the clubs will be 3.5 billion euros, followed by 10 billion euros for an initial period of commitment.  As with any such decisions made in the stratosphere of corrupt, gold crazed management, the foot soldiers, front line workers and fans are merely incidental.  In some cases, not even coaches were consulted.  Liverpool’s Jürgen Klopp was left dumbfounded. “I heard for the first time about it yesterday,” he told Sky Sports.  “We are not involved in any process, not me or the players.”

For Klopp, accepting the proposal was tantamount to rigging the competition, creating a closed shop where the relegation and admission of clubs would be impossible.  “I like the fact that West Ham might play Champions League next year.  I don’t want them to, because I want us to be there, but I like that they have the chance.”  For Klopp, “the Champions League is the Super League, in which you do not always end up playing against the same teams.”  His nightmare: a perennial bout of competition between the same football clubs, a franchise model, in other words, commonly accepted in US sports.  (Consider Major League Soccer, NBA basketball and NFL gridiron football.)  “Why should we create a system where Liverpool faces Real Madrid for 10 straight years?”  Klopp’s observations impressed former Manchester United footballer turned commentator Gary Neville.  “He’s destroyed his owners on national television.”

Traditional football officialdom is also furious at the move.  UEFA president Aleksander Čeferin cast a withering eye over the idea, focusing his ire on Juventus chairman Andrea Agnelli and Manchester United executive vice-chairman Ed Woodward.  Woodward, the furious president claimed, had expressed his satisfaction with the existing stable of UEFA reforms in a phone call.  But it was obvious that “he had already signed something else.”  Agnelli, however, took the crown, being “the biggest disappointment of all.  I have never seen a person that would lie so many times, so persistently as he did – it is unbelievable.”

On April 18, UEFA, the English Football Association and the Premier League, the Royal Spanish Football Federation (RFEF) and LaLiga, and the Italian Football Federation (FIGC) and Lega Serie A issued a joint statement of condemnation.  Were the Super League to be established, the various bodies, including FIFA, would “remain united in our efforts to stop this cynical project,” one “founded on the self-interest of a few clubs at a time when society needs solidarity more than ever.”  Judicial and sporting measures were promised.  Bans on the clubs will be implemented, affecting playing at all levels: domestic, European or global.  Participating players will not be able to represent their country.

With some of these governing bodies, virtue has been a difficult thing.  FIFA has a lengthy record of diddling finances, resorting to bribery and greasing backdoor deals.  Over the years, multinational investigations have been conducted into various executive members of the organisation and associated bodies, including former chief Sepp Blatter.  But on the matter of the Super League, the righteous were proving noisy, with the organisation keen to “clarify that it stands firm in favour of solidarity in football and an equitable redistribution model which can help football as a sport, particularly at the global level”.

Attempts to punish the renegades may not be as fruitful as detractors of the Super League think.  Memories seem to have been rinsed on that score, but the English Premier League itself broke away from the English Football League in 1992.  Officialdom, as it was bound to be, was enraged, as were the fans.

The Super League proposal is drawing attention to an already decaying structure, one that sees little by way of revenue returning to the lower leagues and clubs that were already struggling prior to the COVID-19 pandemic.  With that in mind, it is hard to take the views of Prince William, who is president of England’s Football Association, too seriously.  Well it is that “we must protect the entire football community – from the top level to the grassroots – and the values of competition and fairness,” but that project is hardly flourishing as things stand.

Astronomical transfer fees already keep the top clubs in the clouds, meaning that the Champions League already resembles, on some level, Klopp’s nightmare of repetitive competition.  What the franchise Super League model proposes to do is take it that one step further, creating a closed shop.

Commentary abounds on whether this play is part of a negotiating tactic to better improve the financial standing of the twelve clubs.  With so much football already being played, a mid-week Super League fixture seems like exhausting surfeit.  But for those keeping an eye on football politics, the idea of a reformed European league has been on the table for some years.  In October 2020, the notion of a European Premier League, sponsored by JP Morgan and comprising 18 clubs, was already being mooted.  Alarm was sounded by the words of Barcelona president Josep Maria Bartomeu, who claimed in his resignation statement that the club had “accepted a proposal to participate in a future European Super League”.

Were this league’s establishment culminate in savage retributions – bans, relegations, prohibitions – as promised by the authorities, a standalone creation, hoovering up sponsorships and broadcasting revenues, may well be the default outcome.  Little wonder that the finance wonks suggest keeping the selfish twelve within the tent rather than letting them scamper off.

16 or 18 of the best clubs from say 5 to 6 or 7 or 8 leagues will do wonders. fail to understand why uefa and fifa are so against it that they in true capitalist manner threatens with death and early deaths for anyone getting close to the new league. football in europe is a bit stagnant as it is so a new league with better opposition will do wonders for fotball. so go for it.

I have never been to a football match and I have no intention of ever going to one. :)

It’s cheaper to watch the game at home. And it’s even better if you have a nice home theater system along with no drunk idiots near you.

The fact that so many plebs even care about this millionaire mercenary league is pathetic. They don’t give a shit about any of the fans to begin with, no matter how much overpriced merch they buy.

So many more important things to care about but sadly, to many football yobbos, ‘me klub’ is literally the most important thing to them (next to getting drunk). No wonder the west is dying.

Football, soccer call it what you want, has become a tool of the Globalist Elite for spreading their elitst NWO propaganda BS. In the last few years, they have allowed the Ameridog Zionist capitalists to enter and as many of you all know, whenever they are allowed in anywhere, it is corrupted and destroyed. Hence, when you understand that Jamie Dimon, a despicable chosenite, is behind all of this with his JP Morgan organized crime institute, then you need add nothing more.