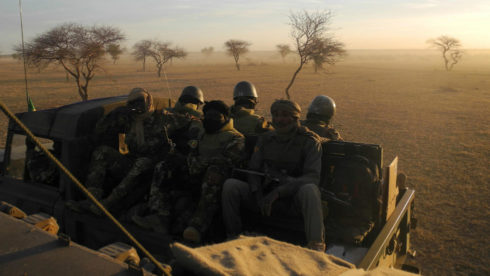 Athens plans to contribute to French expansionism in Africa as a way of “compensating” the help provided by France in the tensions with Turkey.

In a recent statement, the Greek government confirmed Athens’ interest in sending troops to cooperate with the French armed forces in the African Sahel. The project is still under consideration but tends to be approved due to the strong pressure that Greece receives from Paris to “compensate” French efforts to protect Greek territorial integrity in tensions with Turkey. The move sounds truly anti-strategic for Greece, considering that the country will have enemies it previously did not have and will enter conflicts that have nothing to do with Greek geopolitical interests.

In a recent press conference, Greek Defense Minister Nikos Panagiotopoulos said that his country’s political and military leaders are currently discussing the feasibility of sending troops to Africa, where soldiers will join French military bases in order to assist in the Paris-led campaign against insurgent groups that are proliferating in the Sahel and across the region between the Sahara Desert and the West Coast.

These were some of his words: “We are considering sending a group of combat soldiers to Sahel. These are not military advisers, we already have such in the area, these are permanent combat members of the Armed Forces (…) If Turkey tries to attack and we ask for help from France, based on the military agreement we have signed, then the French forces will be there, they must be there (…) We are for them and they are for us”.

When talking about this possibility of mutual assistance, Panagiotopoulos is mentioning the recent bilateral defense cooperation agreement signed by both countries in October, which determine a series of measures to be implemented in order to strengthen the Franco-Greek military partnership. The agreement establishes that both countries must cooperate militarily with each other in conflict scenarios and also enumerates forms of commercial cooperation through measures such as, for example, the requirement that the Greek State buy frigates produced by the French naval industry.

Panagiotopoulos categorically states that sending Greek troops to Africa is a strategic measure for Greece, since, as a way of complying with the agreement signed with Paris, it would create a favorable precedent in bilateral relations and compel the French to repay the kindness, in case tensions escalate with Turkey in the future. However, Panagiotopoulos’ premise is absolutely wrong. It is not Greece that is setting this type of condition, but France. Athens is not freely proposing to send its soldiers to the Sahel – it is France that is demanding it, so there is no reason to consider this type of maneuver profitable in any way for the Greeks.

In the same sense, this type of cooperation would never benefit Greece for the simple fact that there is no military equivalence between both countries. France is one of the greatest military powers in the world, with high combat power and even nuclear weapons, maintaining an active expansionist policy in Africa and the Mediterranean, in addition to occupying a leading and prominent role in the European Union. The current situation of the Greek State is that of a country with very low military capacity, which is under constant pressure from an insurgent and expansionist power (Turkey) and which seeks alliances with France in order to defend its territorial integrity in the face of imminent threats. For France to demand “retribution” from Greece for its support on the Turkish issue is truly absurd, considering that Greece already has enough problems and difficulties just in its tensions with Turkey. Sending soldiers to Africa will significantly weaken Greece’s defense potential and leave the country even more vulnerable in its regional conflicts. So, Paris is acting abusively by requesting Greek troops in the Sahel.

Obviously, if both countries already have an agreement, this must be accomplished – or vetoed. The attitude that most benefits Greek strategic interests would be to find non-direct ways of cooperating with France on the Sahel, perhaps with logistical or intelligence support, but renouncing active military participation. If France continued to demand the deployment of troops, Athens would simply have to abandon the bilateral agreement and find another, less abusive way to establish partnerships. The current situation seems unsustainable. France will be weakening Greece with the demand for troops in African territory, and there is no sense for Athens to continue in a military agreement, whose objective is to strengthen the defense.

For years, France has maintained troops in the Sahel without any success in controlling the region. Paris is unable to maintain an occupation policy throughout the Sahel due to the immensity of the territory, which makes the area vulnerable to occupation by insurgent groups. Clandestine militias – some of them terrorists – currently control much of the Sahel’s zone and French troops are failing to pacify the region.

Furthermore, it is necessary to remember that in recent months a wave of indignation has started on the part of African communities against the French occupation. The main cities of West Africa are being the scenario of demonstrations in favor of the expulsion of the French armed forces due to the chaos and widespread, inefficient violence while being unable to contain the spread of terrorism in the region. In fact, it has become increasingly complicated for France to maintain its expansionism on African soil and now Paris seems interested in handing over to Athens a part of responsibility of managing the chaos created by the French in the Sahel.

The Greek government has nothing to gain by engaging in civil wars on another continent that have absolutely nothing to do with Athens’ geopolitical interests. France is acting abusively by delegating the responsibility for this conflict to the Greeks. It is up to the Greek government to act prudently and avoid further conflicts, seeking to strengthen the country to face the current problems.

Mr. Author: “France is one of the greatest military powers in the world…….” Leave out the bullshit. Nowadays France only tries to fight poor, destitute people in Africa who do not have air support (i.e. multi-gazillion euro aircraft), artillery, tanks, etc. all supported by millions and millions of euros in logistics. This new Franco-Greek military alliance is a political farce. Even combined, the French and Greek military is still weaker than the Turkish armed forces, and Turks are not afraid to sustain casualties.

We will destroy Turkey!

The Minister of Defence stated that the sending of selected men to the Sahel does not result from the Greek-French agreement that was signed, but from the wider “allied” relationship that Athens and Paris have. “We are for them and they are for us,” said Mr. Panayiotopoulos. It should be noted that this is another outspoken lie of the government, which confirms the aggressive nature of the recently signed Greece-France Agreement. Recall that the defeated agreement, among other expressions, provides for “participation in joint deployments or deployments to theatres of operations in support of common interests, such as, for example, companies under the French administration in the Sahel”, but also “mutual support with regard to participation in multinational defence structures, such as the European Intervention Initiative “. After all, given the above, only as a confirmation can be taken the … refutation attempted by sources of the Ministry of National Defence, who claimed that a decision has not yet been made regarding the deployment of Greek forces in the area, as “the issue is under examination by the competent officials’. In fact, they accused those who “attempt to distort” this “clear position”, that they are “lying”, referred to previous relevant statements of the Minister of Defence and “pointed out” that a European force is operating in the Sahel under the auspices of France with the cooperation of “The United States, NATO support, the approval of the United Nations Security Council and at the invitation of the five countries (Burkina Faso, Mauritania, Chad, Mali and Niger) that make up the G5 Sahel (G5S).” RIZOSPASTIS 01/12/2021 Wednesday page 4