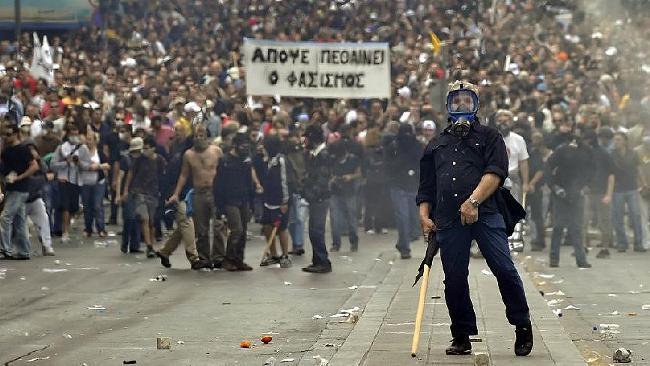 A decade of recession – with no end in sight – has brought Greek society finally to the breaking point. Unless there is a turnaround soon the days of conventional mainstream politics may be numbered.

Directly after my visit to Moscow I undertook a brief two day visit to Athens.  Like my trip to Moscow it was carried out mainly for business reasons, but it also gave me an opportunity to get a sense of the situation in Greece.

The Greek government is claiming that the Greek economy is reviving, and is reporting growth in the last two quarters.  I saw no sign of this at all.  On the contrary in the few weeks since I was there at the beginning of September, the situation seems to have got if anything significantly worse.

My family home is located within the elite district of Kolonaki, which has until recently seemed immune to the crisis.  No longer is this so.  The exclusive shops, boutiques and restaurants that used to proliferate in this area, are now starting to close at an accelerating rate, with nothing opening in their place.  Instead even in this formerly privileged district one sees empty premises marked everywhere with “to let” signs.  Graffiti meanwhile has become ubiquitous and litter collection is sporadic, whilst sometimes aggressive begging is becoming ever more common.

What is perhaps most dismaying of all is the spreading collapse of morale, reflected in increasing dishonesty.

Tax evasion – which the EU, the IMF and the Greek government promised to cure – is now universal, with everyone (rightly) complaining that the levels of tax are now so intolerably high that it would be impossible to live one’s life and conduct one’s business if one paid them.

Under relentless pressure from the EU and the IMF and from the Greek government, the tax authorities have however responded by becoming increasingly aggressive.  One hears alarming stories of people’s electricity supply being cut off and of their homes being seized because of their failure to pay their taxes.  How that is supposed to help the economy revive it is impossible to see.

Until recently the response of many people to the collapse of their incomes was to spend what little disposable income they had left in cafes, shopping for anything other than basic necessities being impossible.  However as money has run out even this activity seems to be drying up, with cafes empty and starting to close.

Greece still has a gilded circle of people who remain stupendously rich.  Amazingly three ballet companies – two from Moscow, one from Kiev – are visiting Athens this Christmas.  Shops like Brioni and Audemars Piguet are still there.  Even these people must however increasingly sense the desperation and hostility all around them.

I was given a vivid impression of this on the night of my arrival in Athens.  The taxi driver who took me home from the airport refused to take my suitcase out of the boot of his car unless I paid him an extra 100 euros on top of his fare.  Since I could not count on the police arresting him – as opposed to siding with him – I had no choice but to do so.  The fact my home address is in Kolonaki undoubtedly made him think I could afford it.  Nothing like that has ever happened to me in Greece before, but as a manifestation of class hostility I understand that it is becoming commonplace.

In summary, I was only in Greece for just two days, but not only did I experience a country whose economy is rapidly deteriorating from an already critical level, but for the first time I sensed a society that is now finally approaching its breaking point.

The talk in Greece is that in the event of new elections the victor will be the conservative pro-EU New Democracy party.  Whilst that may be the case, I have to say that it is a prospect that seemed to me born more of disillusion with the disastrous failure of the Tsipras/Syriza government than of any hope of it providing anything better.  Moreover it is a prospect that may be fostering a dangerously unwise complacency in Brussels, Berlin, Frankfurt and elsewhere.

Unless there is some radical change before long, the days of what can still just about be called mainstream politics in Greece look to me to be running out.

Unfortunately Greece has no Second Amendment like US and that’s why its population is completely disarmed, helpless and hopeless. They are void of any meaningful leadership acting as an incoherent mob. It’s a sad story beyond description.

not really. US citizens have that famed 2nd amendment and they still cant do anything and are pissed on by their government and fascist police.

you are wrong to think that unarmed population is helpless. when the entire society is fermenting then no police in the world can hold it together. all it needs is that out of this time a leader emerges who is radical enough to blatantly cut EU short and go another way… to Russia, i’d say. with Russia and China there’s enough money and help to float Greece back again.

Golden Dawn is the only hope.If the greeks do not vote for them they will perish.Very simple.There is no bottom to this abyss.

Golden Dawn are fascist! They can not be the solution in any way.

Greece has one choice and that is the Golden Dawn, the international kike usurers who’re squeezing the life blood out of Greece aren’t afraid of any other political party.

The Eurotrash and the Yid Banking Cartels can either cut Greece some slack and agree to take a (huge) haircut, or Greek Revolution cometh….

Kill all fascists! Otherwise, on russian site do not propagate fascism. :P

Yes as opposed to being a colony of Jew banks.

Death or you all!

Sod off, you lowly stooge of Yid bankster thieves. Resisting the incessant demands of the institutional Fagans is hardly equal to fascism. You may want to look up a dictionary and discover what fascism actually means?

Thieves are your parents, idiot!

Golden Dawn is at least as fascist as the Ukrainian Right Sector, if are not even worse. Read more about the tortures of Macedonians in Greece. Don’t be so fast in supporting something which you are not much familiar to it.

well, the left had already its oportunity and made it wrong…too wrong, and now the GD can do a better job, but the $ystem detests them

GD? Freedom like in Ukrain für Greece? Never! Look to Kiev and you can see what fascism mean: racism, killing and squeezing the people.

Jewkrainian “Fascists” are useful idiots, thugs, and morons being led by Jewish oligarchs. Golden Dawn are grassroot and independent. You can see the difference by how they’re treated by the West. In Jewkraine’s case the “Fascists” are well funded, supported, and not demonized in any way. In Greece’s case the Fascists are imprisoned, shunned by the media, attacked, and financially isolated.

I’m not advocating the Golden Dawn or even fascism, but the way all of you people hold fascism as singularly evil is a little farcical. Communism, for example, has generally brought reverse-racism, suppression of all culture, killing and squeezing the people. Most Socialism is milder only in that it shuns the killing. Even ‘free-market’ capitalist systems seek to convince you you’ve got a choice, so you don’t realise you live in a feudal construct, using the tyranny of money, debt, licensing and insurance in place of threat of violence. In general, the more the political/religious ideology strives to dictate to the people, and the more authority and control it demands, the worse it is, and the actual ideology itself is only a flavour whose main use is providing symbols and colours so it’s uniforms and banners can be distinguished from other types of flavours of oppression.

As a Greek, i can confirm but this is only the Tip of the iceberg. If you go over to the poorer districts of Kallithea you cannot imagine how bad it is.

If you want my opinion, the whole thing “Pro EU New Democracy Party will win” is absolute bullshit spread by our media. Greeks tend to completely abandon parties that dissapointed them in the past,like they done with the Socialists.

I hate to say it but the only viable alternative is either a far-right government (which most likely will never happen due to lack of parliament support to form a government) or a military government.

The Kolonaki district the author is talking about is the last bastion of sanity and economic “stability” in Athens. The district is ravaged and in the winter it is slowly turning for the worse….

Surprised that Greece has lasted this long without a major collapse. But I guess its really a slow motion decline to an eventual collapse. Followed at some point by the useless EU.

Read more about the tortures of Macedonians in Greece. Don’t be so fast in supporting something which you are not much familiar to it. Golden Dawn is at least as fascist as the Ukrainian Right Sector, if are not even worse.