Thursday late night, 18 May 2017, the Greek Parliament voted to accept another round of devastating troika (EC, IMF, ECB) conditions for an additional debt package of close to 5 billion euros. All of the 153 delegates of Alexis Tsipras’ Syriza-Anel coalition voted ‘en bloc’ for the suicide package, all 128 opposition members against. Nineteen didn’t show up. Perhaps they were too afraid to vote for the opposition. Just as a reminder, PM Tsipras, a socialist, is leading Syriza, Greece’s prominent left-wing party, that for reasons of majority decided to align with the extreme right-wing party ‘Anel’ which currently holds a mere 10 seats in Parliament.

And another reminder- Alexis Tsipras, for the last two and a half years, since 26 January 2015, to be precise, has been selling his soul (if he has one), and more importantly, the country that trusted him, to the western crime oligarchs, i.e. the IMF, the European Commission, akin to the European (non-) Union and the Goldman Sachs-run European Central Bank – and Germany. James Petras calls him the Traitor of the year. This may be an understatement. 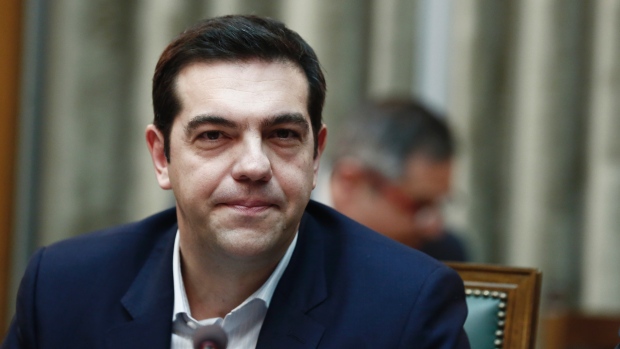 This new hateful and odious debt – Tsipras and his clan know that its fraud – this new debt will pave the way for more ‘rescue’ packages (a neoliberal term for legal robbery) that will help servicing (pay back) the odious debt – meaning the illegally acquired and imposed debt. Odious Debt, according to all international standards and laws, is illegal debt and may be defaulted on, or canceled at any time by the debtor nation.

This new debt is supposed to alleviate the already monumental and monstrous burden of debt, close to 200% of GDP. Repayment ever is impossible, even by the words of the IMF. Not a penny of the new loan benefit the poor and the destitute, those that have lost everything – those 30-plus percent that are already under the poverty line, of which 1.5 million live in extreme poverty, about 13% of the 11 million Greek population. They stagnate along, many as beggars as a last resort, without jobs, no income, no pensions – all gone, by the troikas criminal imposition of debt and austerity.

The new 5 billion-euro debt comes with even more austerity strings attached, more cuts in pensions, salary reductions, of the remaining meagre social services, privatization of what’s left of social capital and infrastructure – in total cuts of about 4.9 billion euros until 2020. These cuts will further increase poverty, misery, famine, child mortality diseases without cure, no medications, no hospitals, desperation, the suicide rate – and the economy that collapsed by 25% since 2011, will further shrink – beyond the point of no return.

How can anybody in his clear mind think or pretend that this will help Greece out of its strangulation? – It is sheer Suicide that you, Mr. Tsipras and your spineless fellow Members of Parliament are driving your country to commit; slow and hurtful hara-kiri. Not you, of course, Mr. Tsipras. You will be rubbing elbows with the elite that destroys your country. Have you given your people a rational justification, why they should continue to suffer? Why are you still reluctant, even unwilling to talk about exiting this horrendously corrupt construct, called the European Union with is fraudulent, dollar-based and totally unsustainable currency, the euro?

You can take that decision any time. You could have prepared for it – so transition would be smooth. And if you haven’t, it’s never too late. Just give your people hope they can count on. You could gain back your country’s pride and sovereignty – a country and a people that is the symbol of western civilization in more ways than one.

Why do you think you are so important, that your staunch egocentricity is ranked higher than the well-being and the recovery of the people who love their country and who have elected you, believing in you? – Why do you betray your people, Mr. Tsipras?

Where is your love for your country, for your countrymen who have given you a mandate to lead them out of their predicament? Just think for a moment what love could do for them and for your own Peace of Mind.

Are these dark forces behind the money cartels threatening you? Your family? – If you don’t obey, you may be ‘wasted’, in the jargon of western secret services. It has happened before and keeps happening. As a Statesman, step up and tell the world, while saving Greece. 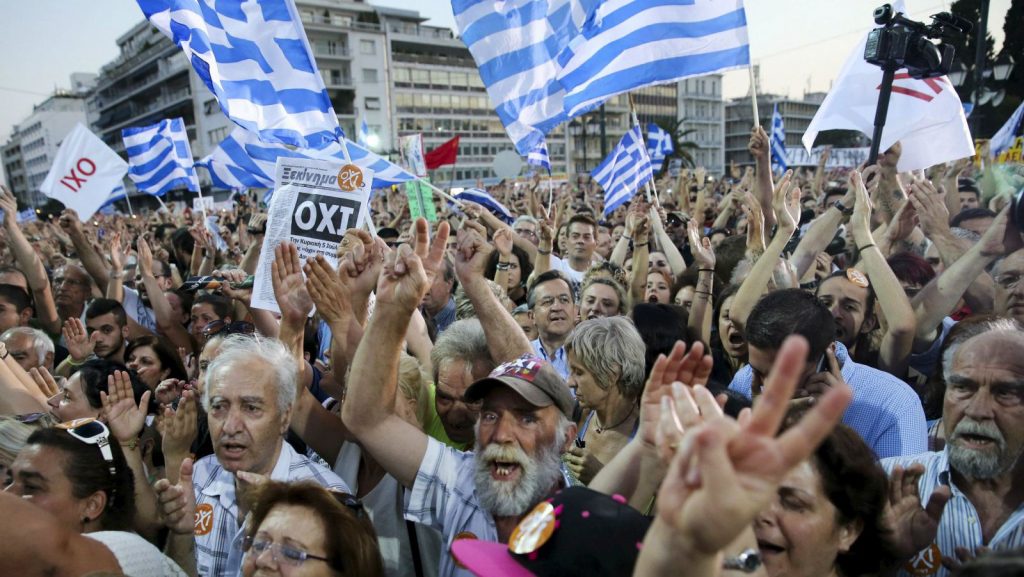 To the people of Greece – why do you accept this humiliation, this betrayal, this usurpation of your resources, robbery of your social capital – your beautiful country – destruction and humiliation of your rich culture, philosophy, mathematics your forefathers created and that have spread around the globe? – Why do you allow this crime being perpetrated upon you – your children and children’s children? –This colossal crime will put future generations in peril

Step out from this straight-jacket of debt and misery, default on your illegal debt, bring back your own currency, the drachma, and start afresh as a new sovereign country. More than half the world is in solidarity with you. Even in the west. Many countries would like to support you, Greece. The diabolical western Brotherhood’s fist in their neck prevents them from doing so. In the East, there is no fear. They will stand by you. The East is the future. Be aware: The East Is The Future.

President, Mr. Xi Jinping’s massive “Economy for Peace” ingenuity, the OBOR – One Belt One Road, now also called the Belt and Road Initiative – BRI, is China’s response to the western world’s economic collapse from greed and aggression. It’s the largest economic platform in the world, encompassing already now more than a dozen countries, more than half of the globe’s population and at least one third of the world’s GDP. The BRI promotes economic development, transportation, infrastructure, energy, education and research – in dimensions unseen in the past.

The idea is to connect all nations and people from Vladivostok to Lisbon and from Shanghai to Hamburg. All are invited, not forced to join. Greece – open your minds, eyes and hearts to OBOR / BRI and you will see a bright future, a quick recovery from your current state of demise. Be courageous. Enough is enough!

Peter Koenig is an economist and geopolitical analyst. He is also a former World Bank staff and worked extensively around the world in the fields of environment and water resources. He lectures at universities in the US, Europe and South America. He writes regularly for Global Research, ICH, RT, Sputnik, PressTV, The 4th Media (China), TeleSUR, The Vineyard of The Saker Blog, and other internet sites. He is the author of Implosion – An Economic Thriller about War, Environmental Destruction and Corporate Greed – fiction based on facts and on 30 years of World Bank experience around the globe. He is also a co-author of The World Order and Revolution! – Essays from the Resistance.

Tsipras, and the program of his masters is what the Greek people voted for. Tsipras was elected by a majority of the Greek electorate, and democracy has spoken. In a democracy people tend to receive the government that they deserve. Bend over Greece, here it comes again.

His voters didn’t expect him to default? I thought that was his promise.

No Brexit scenario taking place here. I’d wager the Greeks would majority vote to stay in EU. The moron Tsipris could have planned a new financial structure prior to his election, but instead caved. I remember speaking to someone in Greece years ago that the people avoided paying taxes and difficult for tax collection. They could have started some type of digital transaction of monies from businesses and an income tax system until the country gets on their feet. Labor would have been cheap and if smart, proposition the Chinese and Russians to set up businesses there. Instead, they suck Brussels tits hoping for a squirt of milk.

tsipras did not do anithying for drachma. he hed no cards in hand. childish bluff, and all participants loughed on him.

What about property tax? Isn’t that far easier to collect than income tax? besides, government bonds constitute property so Greece could thereby tax the IMF!

Payday loans on steroids! Greeks continue to take it up the poop chute and ask for more? Is this what has become of the once proud fertile ground of Democracy a lesson to all?

A Grexit would leave Greece in shambles, at least the UK has a chance.

Screw them. They get want they voted for .

As others here also commented, Tsipras can be as bad as the author claims, and yet this is not only his doing. He promised the Greeks they could stay in the EU(ro) but without austerity–something that was only his to deliver if the eurocrats would grow a soul. Fat chance! At the moment of truth, the Greeks made it clear that their #1 priority (and I mean this literally, above food on the table) was NOT having to look after themselves. Because they’re NOT a proud, dignified people. They’re true Europeans after all, i.e., slaves. And no, they share little with the classical Greeks except geography, maybe language. And yet, let’s keep in mind that they are our fellow humans, for there’s little evidence that they’re the last ones to feel the sharp end of the EU stick.

To understand what is going on Greece u have to look at numbers Greece is on the top 5 countries (with Italy,Spain,Korea,Japan ) with oldest population Always changes happen from young people as old people always are more afraid and more weak to fight. So media here start propaganda that out of EE means no money and that Greece ll become as Venezuela(classic propaganda) so all old people really start to vote for partys that support Europe. Young people voted for patriots of Golden Dawn that are anti-muslims and anti-EE and also some other partys that want drachma. But thats not enough as old people are majority and this get worst and worst as young people start to leave for other countries to work.

Now lets explain why Europe makes all this propaganda and what they want from Greece Greece is connected with Syria as Syria with Libya and as Libya with iraq In Syria there is a war for gas pipes,oil etc and in Greece there is economical war for the same reasons EE tries to block Russian(as gazprom) and other countries to put out gas and petrol from Aegean sea(that has huge amount of fuels) and they want only American and European companys to take part By that way they totally block Russia from supplying Europe and also destroy Greece as cant even choose between many companys and take the best price. So they want to take all the resources (almost) for free.

The solution is what Cyprus and Egypt are doing,putting all countries into the game as Russia,China,Israel.

and they want only American and European companys to take par

By that way they totally block Russia from supplying Europe and also destroy Greece as cant even choose between many companys and take the best price.

this is not true. the EU has the lowest prices. buys for the whole union. little greece has no chance get better price. btw., germany want mordstrea2. how would be cut russia from EU???

these are simply fascists and should be shot. they sure are not the way for ellada.

no suicide. they know, never pay back. the end is bancrupcy. or for stop of refugees cut by 30-40%. i would give erdogans mone to greeks.

Greece for the ethnic-Greeks! That is the only rescue option that will work. Nationalism works, super-Federal-governments always fail… But not before first starving the people ,raising taxes, and wasting the best the land and people have to offer. http://ihr.org/