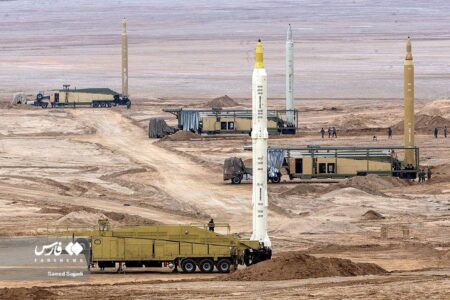 ‘The Great Prophet 17’ military drills on the coast of the Persian Gulf were launched on December 20th and were completed in five days, on December 25.

The exercise involved the ground, naval and air forces forces of the Islamic Revolutionary Guard Corps (IRGC) and units of the Basij Resistance Force. They were held in the provinces of Khuzestan, Bushehr and Hormozgan.

Iran’s armed forces chief of staff Major General Mohammad Bagheri claimed that these exercises “were designed to respond to threats made in recent days by the Zionist regime.”

“The military exercise … is a serious warning to Zionist regime officials,” said IRGC chief Major General Hossein Salami. “Make the slightest mistake, we will cut off their hand.”

16 surface-to-surface ballistic missiles were fired across the country’s south at the close of military drills. The missiles were identified as Emad, Ghadr, Sejjil, Zalzal, Dezful and Zolfaghar. Their ranges vary between 350km and 2,000km (220-1,250 miles). The fires were claimed successful. 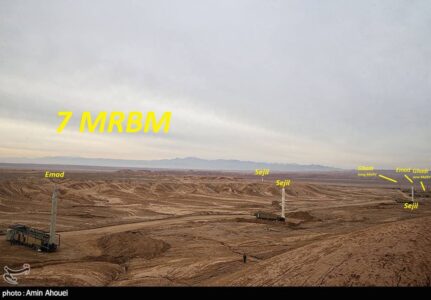 The missiles hit one target. According to the footage, the target of the strike was an object that looks like the Israeli nuclear research center in Dimona. At the same time, 10 drones simultaneously hit other targets.

“Sixteen missiles aimed and annihilated the chosen target. In this exercise, part of the hundreds of Iranian missiles capable of destroying a country that dared to attack Iran were deployed,” Major General Hossein Salami added.

Also, the IRGC armed forces demonstrated the installation for the multiple launch of barrage ammunition, similar to the Shahid-136 drones. The system is based on a truck and may carry 5 kamikaze drones.

The drills came soon after the Islamic Republic of Iran Navy received military aircraft, swimmer delivery vehicles and a destroyer which had been modernized. The equipment was handed over to Iranian naval forces during a ceremony at Iran’s southern port city of Bandar Abbas.

Iran will rain hell on all NATO assets in the ME, especially Israel and American bases. After Iran shows how weak America is, every country that has illegal US bases will be thrown out to, because no one will be afraid of the US military. Soon after getting embarrassed by Iran, I give America military less then a month before it loses all its bases

If many really believe anything like that, You could make some kind of Disneyland park and make us come as laughing touists too:)

What was different about those missiles, aside from simultaneous launch/hit, was their warheads’ maneuverability. Although all are ballistic missiles, none of them move on a ballistic trajectory. Good luck intercepting them. Look who freaked out and howled the most!

A very warm Merry Christmas to all, particularly our Western-Christian friends. I wish all of you good health, peace of mind and success.

Thank you! Not sure about Jens tho, Jews hate Christmas…or perhaps he is just a shabbat goy like IronZ.

Do you want me to show you?

I’ll show you. Actually your Jews will show you, you trust them unquestionably. The most eminent Israeli experts directly from Israeli propaganda newspapers. http://www.jpost.com/diaspora/jews-and-greeks-explore-long-deep-relationship-566991 First half of the text is complaining how “there will always be antisemitism in Greece” and how Greek Ministry of culture didn’t cooperate with them. Oy vey! Interesting parts:

“A far more ancient dispute arose during the conference – the letters from First and Second Maccabees, non-canonical Jewish books written in the Hasmonean period.

However, the letters’ authenticity was and still is disputed.

“Most of the scholars believe that the letters are not authentic because it’s very strange for a chief priest of Israel to just write about friendship and brotherhood,” said Special Secretary for Religious and Cultural Diplomacy Dr. Efstathios C. Lianos Liantis during an interview with the Post.

Dr. Noah Hacham lectured on the academic dispute at length and started by explaining the earliest Jewish reference to the relationship. “In the Bible, there is no hint that there were any contacts between the Spartans and the Israelites or the Judeans,” Hacham said.

“No Spartan would have expressed himself in that manner,” Hacham said, quoting Erich Gruen, one of the most influential scholars who believes the letters were a Jewish invention. Gruen does not understand what benefit a Spartan king could expect from garnering favor with a “militarily impotent satrapy” like Judea.”

They try hard to prove their lies, but not even them can’t deny how ridiculous this entire story is. Like another famous story (also Josephus) about Alexander the Great in Jerusalem, how he was impressed by jewish priests, he sacrificed for Jehovah, then he was blessed and whatnot. But he never was in Jerusalem! Jews – experts in forgeries and lies for 2500 years.

Your biggest mainproblems about greek and Jewish things are, You has eroded Aleaxandria away becaue You name is as “egypt” or Arab”.

For a longperiod it was a center og that world and You might other places to it, but You dont.

You deny tonunderstand, that Greece wasnt a state as defined by Greece of todays, It was – apart from mainly the Izmir area very active coastliner trade centers runned by tribes.

Its partly exact the same for jews. The even had small kingdoms nor far from Mecca and Medina.

Its pathetic You fight about things which hardly was important for those people in those days.

Even after that You got it wrong too. You ignore Jews and greeks were needed functions because the rest was kept stupid by the ones, You see as heroes and even do today. You support stupidisme by that and fight for Munchausen and Kafka.

Greeks was from Gibraltar to the Aral lake in small numbers all over. The Jews actaully with the Arameans had several states and affiliates and was well represented in the whole ME and more to it. They also emmigrated and lost and won things.

The all over crawking arabs hardly wasnt there. Many of the rest was BAALS. Some might say they came from Balbek. Thats not true. But they were many. Muslims mainly are converted Baaals.

Again I don’t understand you. But I agree that we and Jews were friends. Jews are blamed for everything secret societies do. Adam Weishaupt was 100% German and his cult controls the world.

That passage with Alexander the Great was also told by Orthodox priests.

What your little dick? Keep your pants on, no need to embarrass yourself.

You can read but You cant understand. Mnay times I have written that Biden is much better then Trump but they really need reforms as sanders propose.

When I write plus for Bidens You have to learn to relate to that.

USA need a lot of reforms. Too much has become too old even most things do work. I also many times has descriebed that and the Sanders(and Obama) solve some important things.

If You solve some problems well, its easier to see the rest.

We are much better in most things here in Denamrk right now. Our Governess is based on consensus by 25% of the parlament and a female premiere Minister just as good or bad as any man we know.

We are number one in low corruption, Our courtds and pilice are sober. We need more qaulified people for advanced jobs, Our economy is more then +. Our electricity is 50% cowered by windfarms, which we by the way invented for the world. We also are very effective having 37 hoiurs a week at work and 5 weeks of vacation.

No offence but danes take good things from otherts and implement them as Ours for own purpose. they shoud see at least some of this.

We do have stability.

Biden is much worse than Trump though. And yeah, Danes ar faring good.

Mabee the hospital should check You up:)

For years and years Iran has made a more and more warm and dry climate for their population in their internal and external politics. It seemes to be some kind of contraseption. 80 millions seemes to be enough.

The most important debate right now is about beards are warming You up or protect agains the sun.

Thx for the laughing, it’s simply so funny to look at the iranian military trying to look strong LMAO

The old bitchers are still here, I see.

Plastic-Zion, A.K.A, underage kid on Xbox that played too much COD. jens holm, the fuking rtded old man, who looks like a true Nazi. Garga, still having a laugh…

I feel like some of you changed your names as well. I did, I’m mostly on RT and other websites now.