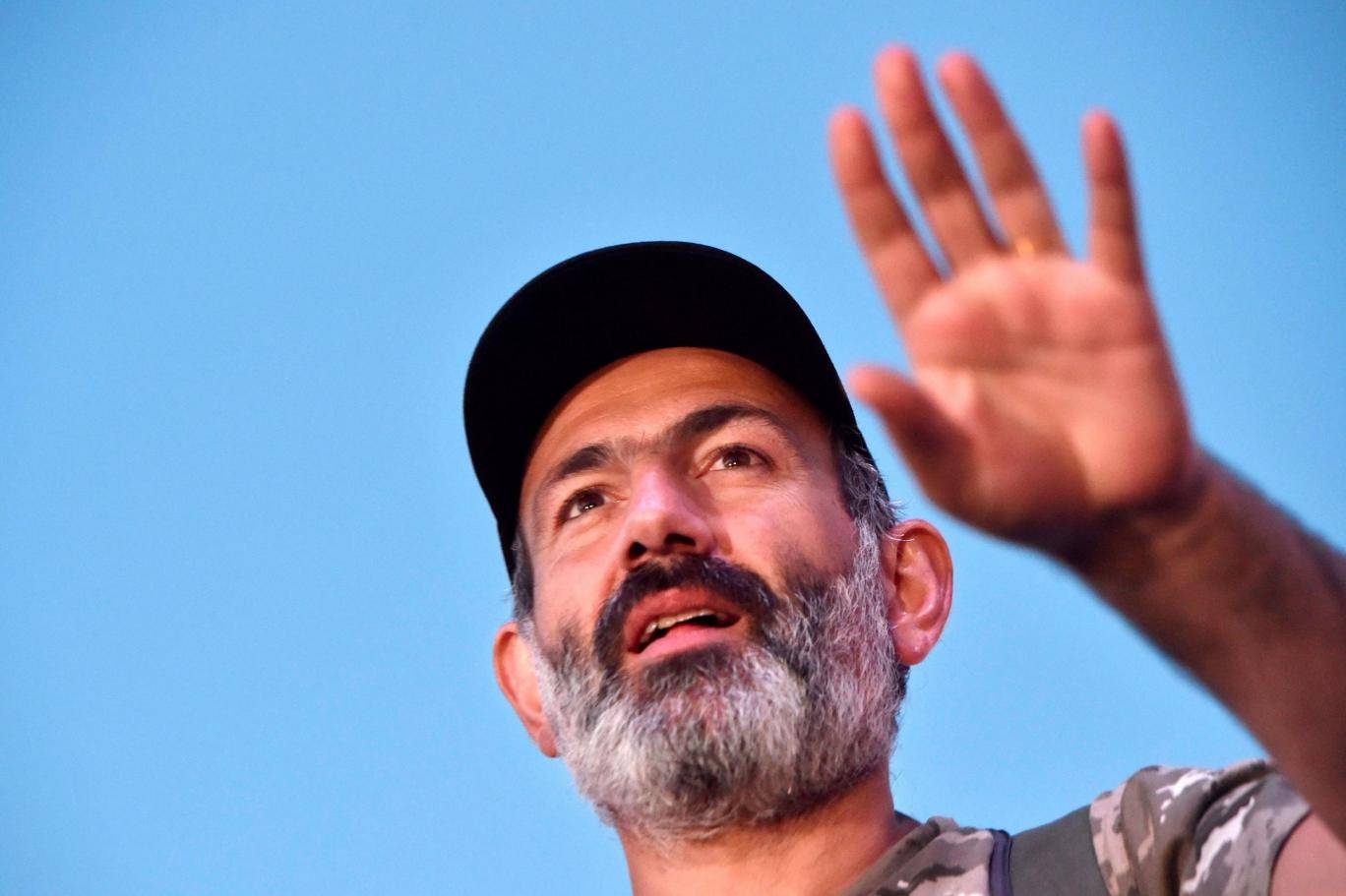 UPDATE: The General Staff of the Armenian Armed Forces issued a statement demanding the immediate resignation of Prime Minister Nikol Pashinyan and the government.

The Prime Minister and the Government of Armenia are no longer able to make adequate decisions in this crisis and fateful situation for the Armenian people.

The Armenian Armed Forces have long patiently endured “attacks” aimed at discrediting the Armed Forces by the current government, but there is a limit to everything.

The Armed Forces of Armenia fulfilled their duty with honor, fought shoulder to shoulder with their people against the enemy.

In connection with the current situation, the armed forces of Armenia demand the resignation of the Prime Minister and the Government of the Republic of Armenia, while warning them to refrain from using force against the people whose children died defending their Homeland and Artsakh.

The army has always been with the people, just as the people are with the army.”

Pashinyan immediately went on the defensive, urging his supporters to immediately go to the streets and said that this was a “military coup” attempt.

“I call on all our supporters to come to the Republic Square. ” Pashinyan said.

He is also expected to make an address to the nation.

In Armenia, the deputy head of the General Staff of the Armed Forces was fired.

He “dared” to question Prime Minister Nikol Pashinyan’s words about the uselessness of the Russian Iskander missiles. When asked if it was possible that the missiles would have a 10% chance to explode on impact, he replied:

“Of course, impossible!… Sorry, but this is not serious. It is not serious to draw conclusions with such superficial assessments. I don’t know who said what, but I repeat – it’s impossible.”

This relates to an interview with Nikol Pashinyan published in Armenian media.

Pashinyan voiced the opinion that in the 2020 conflict with Azerbaijan, as a result of which Nagorno-Karabakh was lost, Russian missile systems were “guilty”, since “they did not explode or only exploded at a rate of 10% when striking a target.”

The Russian Iskander ground-to-ground missile systems are in service with the Armenian army. It seems to the chief official of the republic that it was the armament from Russia that caused the loss of the territories of Karabakh by official Yerevan, even taking into account the non-recognition of Artsakh by Armenia’s authorities.

Pashinyan commented on the assumptions of former Armenian President Serzh Sargsyan about the need to use air defense systems on the fourth day of last year’s war. How anti-air systems relate to a missile that’s purely a ground-to-ground strike weapon is incredibly questionable.

“I think he should have answers to many questions and not ask questions, the answers to which he knows. Or maybe he will answer why the fired Iskander missiles did not explode or only exploded 10% of the time,” Pashinyan said.

During the last conflict in Nagorno-Karabakh, at least 16 missile systems were in service with Armenia: eight Elbrus, four Tochki and four Iskander.

Armenian media and other reports, still, somehow pile up the Iskander with other air-defense system. It appears that whoever is reporting on this is unsure of what they’re speaking of.

Over a month after the outbreak of hostilities in Karabakh, in November 2020, Colonel-General Movses Hakobyan, who resigned from the post of chief military inspector of the country, made a statement at a press conference that the Armenian side nevertheless used one “Iskander” at the time of hostilities.

“It was applied, but I cannot say in which direction,” Hakobyan stressed then.

Clashes between Armenia and Azerbaijan broke out on September 27 last year. The parties then reported on the many casualties among the military and civilians. It is also known about the use of armored vehicles and artillery by the Armenian and Azerbaijani sides.

It should be noted that the issue of the loss of territories by Stepanakert has become very painful for Armenia. Prime Minister Pashinyan said that the text of the then promulgated statement on the cessation of fighting in the region “is inexpressibly painful for him personally and for the people.” But at the same time, according to the politician, Armenia and Karabakh made a decision to end active military clashes as soon as possible in order to avoid heavy casualties.

At the same time, after the signing of the agreement, President of Azerbaijan Ilham Aliyev made a statement on the “surrender of Armenia.” A completely justified statement.

After all the aggravations and negotiations, Baku achieved peace on favorable terms. However, Pashinyan does not want to admit responsibility for what happened, but is looking for the culprits among third parties, in particular, “among the Russian air defense systems.”

Now, it should (once again) be repeated that the Iskander is not an air defense system. Also, it is unlikely that one of the missiles was used, since it is quite a notable event, as the missile is incredibly powerful and hard to miss it being shot in an “undisclosed direction.”

It could be that the missile was simply misplaced, and they thought they shot it. Nobody will ever know, after all, according to Pashinyan 90% of the time they don’t even explode. Even though Armenia has never actually launched an Iskander missile.

It could also not explode if its warhead was sold off for some easy profit. 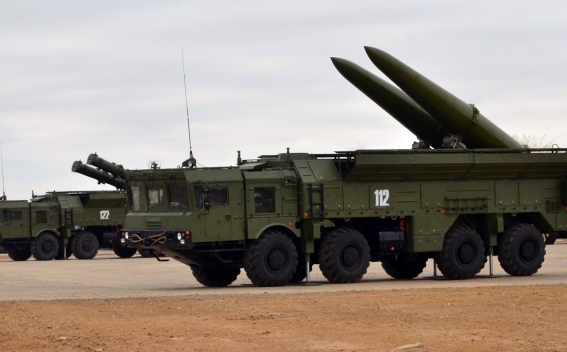 The Iskander and its launch vehicle. One should keep in mind that these missiles can likely take down any aircraft if it served that purpose. It would be suitable to take care of, say, a flying Aircraft Carrier, if those could fly. Click to see full-size image

In conclusion, blaming the Russian Iskander for the loss could be entirely justified, if nobody on Armenia’s side read the “Operation Manual” and figured out that the missile is not an anti-air one.

It is quite shameful and very poor reflection on Armenian people that such a cowardly power hungry loser like Pashinyan is still in power. In any nation worth half its salt he would have been hung from a lamp post a long time ago. Armenians obviously have no shame or national honour.

If Pashnyan tried to hit a drone with Iskander, then 10% hit is a very good outcome. But he didn’t. He just wanted to lose the war, which he achieved.

If he tried to hit Azeri pipeline with Iskander, then it would have 100% good outcome, Azeri air defense has no military piece available to intercept such a missile

So you guys are supporting war.

Exactly what I have been saying. Russia is a gas station with a rusty army where only 10% of their bombs explode. Russia is incapable of entering into a partnership with the free and civilised world.

Anyone can fake attempt to make the other seem inferior,in reality russia know the truth,

I’d be more worried about ye power over there sarcas,only made a bigger fool of usas too:

Well in the event because the world is aware usa todays is the junk of the centurys,yet india co developed with russia far too many a systems to mention,thus be as your god whom isn’t so pure i may had,however imagine how hopeless india would be based on such lunacy? Carefull what you eat over there,engineer (never)

Aww shlomo . . what’s with the “hindu” tag? Trying to hide your zionazi arse under an Eastern religion?

I am coming to a conclusion that it’s not Azerbaijanis who were killing Armenians, not even Turks in this case – it was just natural selection.

The traitor tries to hide his betrayal by blaming anyone who passes by, it is time for the Armenians to make him pay the price for his betrayal and issue an international arrest warrant for Giorgio Soros, his master.

I hope yous right Kenny……time to depose Pashinyan to the gulag in Ervin!

if hanged high he would talk much less…

Fuck this Pashinyan. I want President Sarkisyan back into power or else this motherfukker will get both Iran and Armenia in trouble.

Ahson, I want you iranians to leave islam.A lot of iranians are leaving islam.unlike arabs who are dumb iranians are moderates and intelligent people except for shia mullahs.

doc……for the love of god……we can’t go back to being Zoroastrians! How do you wipe out 1400 years of civilization? You ran away from Iran……now you are bitter! It is you who left. A 100k zartushti still in Iran. The fastest growing population, with lots of secret conversions (out of free will)……mind you. Even if they don’t enter the fold of the community, they still identify with their heritage, at least wear the farvahar but you walked away! you deserted us! its an unforgivable offense!

There are many zoroatrians in India.Really good people.They ran away from Iran because those dumb Arabs attacked iran.Really feel bad for them.

What the hell is this,soros protestant week,they shall fail yet again,see once the wisened do their chess move to win,they don’t act like little crybabies ‘oh please i want to revert my move’ How unadult is trhat serious,that’s why such spoilt bratty lunatics are getting smashed outta the way No matter how any cia/soros troll tries to spin it,they shall not earn’t it,why they shan’t have it, freedom no longer freedom,I’m afraid are we to reason as men or are we to play the mouse game? I made my choice,it came with birth and no,they shant change my sex,prefer power to fake billions!

He should have been removed the first day of the war. Soros/CIA traitor.

Please tell me….what the f*ck are the Generals waiting for?

Pashinyan is a natural born low lifer, that much Is true.

But….. Putin sticks much too much with Turks and Aserbeidjanis. Thats really sickening.

2893 Azerbajan soldiers beside 200 Syrian terrorist have been killed during NK war….there were few clashed between Armenian infantery soldiers and Tanks vs AZ troops…most of the AZ soldiers caualties was caused by the use of Smerch Rockets, Toshka and Iskander….

Well done to him. Karabakh was a barrier for euro integration. He solved that, next is getting rid of reliance from certain northern country, that doesn’t even have a border with. Keep going.

You get what you pay for. Can’t expect high quality from a cheap weapon. Want a better performance, don’t buy a weapon designed in the 80s.

all these empty vessels backed by the ill-liberal west, will never own up for bEing losers. They must BLAME RUSSIA

Pashinyan should have been hung from the highest tree in Yerevan at least 4 months ago. He is a national traitor and an embarrassment to Armenia.