The video depicts Turkish-backed ‘moderate oppositioneers’ that are beating a handcuffed boy (likely 10-14 y.o.) in order to force him to ‘talk’ (it’s unclear on which topic). A shot from the AK-47 rifle was also fired by moderates to ‘motivate’ the boy.

Some  sources suggest that the militants from the video belong to Sham Legion or Nour al-Din al-Zenki Movement. The both groups are described by the Wstern media as a part of the ‘moderate opposition’ and backed by Turkey and the United States.

The video was reportedly filmed in the Syrian border town of Jarablus in northern Aleppo that had been seized by the Ankara-led forces from the ISIS terrorist group.

I keep faith that the whole truth will eventually come. It already does but very slowly (too slow for these poor people living in the middle of all US-created messes). To call these horrible creatures anything approaching humans is a disgrace. I do not want to watch this video because it just rips your soul appart knowing that it is a child being subjected to this horror. These so-called men should all be shot – there is no turning back for them – evil has to be eradicated permanently.

Real humans of what ever religion or race are beside you in our grief that this should happen to any human , but especially to a child . Beyond comprehension . This evil is an expression of a perverted form of Sunni Islam , the Wahhabi sect. The royal family of Saudi Arabia are its champions, and via their schools they have been exporting this poisonous fabricated religion, to all Islamic nations. The Saudi royal family have been promoting this since the seventies , and is still expanding its dark poison . What we are up against , is ,45 years of hatred , pumped into children’s minds , who have now “grown up” to become “martyrs”. First of all, we must put these schools out of commission .

I would like to replace this poor child with Obama asap

i would rather eat your heart with a spoon u nigger!

There are now several videos showing different children being tortured and
even decapitated. The torturing of children must be about the most
repulsive actions possible. Harming a child, any child, defiles human
instinct; but here it seems almost commonplace. It goes beyond what
can just be condemned into some level of evil that can not be ever
understood.

Just as they planned, and now one has interfered so far. They almost did not get to do this, but then Russia stepped in to save the Islamist-dictator of the evil-Turkish-Empire which has genocided millions of Christians in just the last 100 years alone. 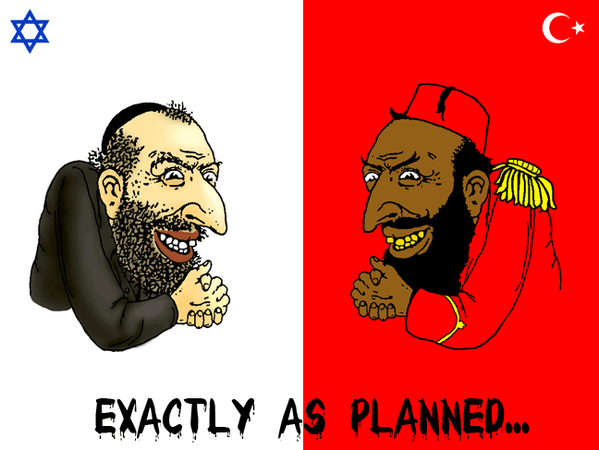 you sir are a nigger and a nasty one at that! i bid you good day sir