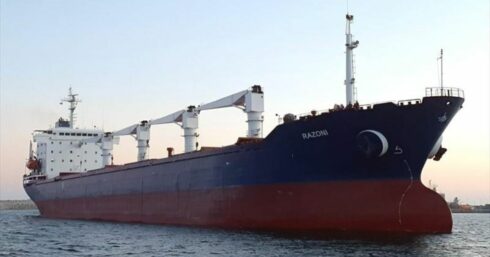 But emerging nations will not adhere to the narrative that Moscow is “contributing to hunger” – on the contrary, these countries will receive more food.

There really seems to be no limits to the practices of the West and its Ukrainian proxies. The Russian government believes the recent grain deal was sabotaged by Kiev as part of a plan to worsen the global supply crisis and add the food issue to the nuclear blackmail. The case reveals how the methods of the West-Kiev axis are reaching a truly intolerable level.

On October 30, the Russian Foreign Ministry spokeswoman Maria Zakharova said during a press conference that the grain deal was terminated due to the terrorist actions of the Western-backed Ukrainian government. The aim would be to use the food crisis narrative to endorse Western-Ukrainian nuclear blackmail, thereby justifying Kiev’s receipt of more money and weapons. According to Zakharova, the Ukrainian government’s attitudes are based on the triad “money, weapons and death”.

“The grain deal was thwarted by Zelensky and his terrorists, who are led by British specialists, in order to add food to nuclear blackmail. They are not satisfied with [getting] money and weapons. They need more deaths. The Kiev regime rests on this hellish throne: money, weapons, death (…) The Kiev regime, out of its inherent greed, is too ravenous to give anything to anyone, even when others donate [the very same things]”, she said.

Zakharova’s statement should be read in light of some earlier speeches. Days before her notes about the grain deal, the spokeswoman had commented on the Ukrainian nuclear blackmail, stating that “it is very possible that nuclear blackmail is being used by the Kiev regime, among other things, to obtain more and more financial and military assistance from the West”.

She has also warned on behalf of the Russian government that Kiev and the West abandon any kind of nuclear rhetoric, as this kind of escalation would harm all sides and generate a war without winners, where thousands of innocent civilians would die.

“We call on the West to influence its Ukrainian proteges to abandon this highly dangerous risky undertaking. And not only this one, but all those steps, activities and actions that involve nuclear blackmail, since all this leads to irreversible consequences and possible mass deaths of innocent civilians”, she said on October 27.

Aside from the matter of Western blackmail, the Russian government made decisive statements at the end of October on the issue of the grain deal. The suspension of Russian participation in the agreement was justified by the result of Russian investigations concluding that British intelligence participated in the massive Ukrainian drone attacks against Crimea and the Black Sea Fleet, which hit military and civilian ships involved in the corridor of grain export.

“Given the actions of the Ukrainian armed forces (which are designated as a terrorist attack), led by the UK specialists, and staged against Russian vessels ensuring the operation of the humanitarian corridor, the Russian side can no longer guarantee the safety of civilian carriers involved in the Black Sea Grain Initiative, and suspends its implementation from today for an indefinite period”, Russian foreign ministry Sergey Lavrov said on the occasion.

This Russian renunciation, however, did not indicate a lack of Russian commitment to the global food supply. On the contrary, Moscow has made it clear that it will continue to work independently to transport grain – as well as fertilizers – to developing countries, especially in Africa and Asia. In this way, the states that most need food aid will continue to be provided, so that the end of Russian participation in the previous agreement will mean damage only to the European market itself – to which most of the grain was going according to the rules of the deal, which were severely criticized by Russia.

Russian Agriculture Minister Dmitry Patrushev commented that between 60% and 100% of the grains were being seized by Europeans and not leaving the continent, so the objective of contributing to the fight against hunger in the world was not being achieved. In this sense, the Russian suspension will serve not only as a response to Western provocations, but also as a way to create new, more effective export mechanisms. According to Patrushev, currently Moscow is willing to send 500,000 tons of grain to poor countries.

Considering these facts, the tendency is that the Western plan to use the end of Russian participation in the deal as rhetoric to endorse nuclear blackmail will fail. Emerging nations will not adhere to the narrative that Moscow is “contributing to hunger” – on the contrary, these countries will receive more food and support Russia against Western provocations. And with that, there won’t be a long future for Western discourse.

However, this is unlikely to impact aid to Kiev. Certainly, Western intelligence will continue to work on new strategies to justify the sending of weapons and money and to escalate nuclear rhetoric, since for NATO what matters is to take its war against Russia to its ultimate consequences.

The brazilian bimbo pseudo researcher should stick to analysis of Samba and Copacabana butts… anything else he is not capabale of.

Who is the biggest loser of the energy crisis?

“The biggest loser is Russia. With a clear difference from others. The world’s largest gas exporter, one of the largest oil exporters, one of the cornerstones of the global energy market.”

But now it has played itself out of the game.

“Russia has lost its best customer, i.e. Europe. Russia sold 75 percent of its gas and 55 percent of its oil to Europe. Europe paid on time and never caused any problems.”

V for victory
Reply to  Elgar

Never caused any problems until they took part to the plan in Ukraine to pose a threat to Moscow. LIAR.

Crisis provoked by the war could be a historic turning point towards a cleaner and more secure energy system as governments including the US, Europe, China and Japan respond with a shift to clean power and technology.

Long overdue development, greed and economic stupidity will unhappily prolong the age of foreign, dictators providing energy, but at the end, we are all better off without their gas and oil.

One of the most daily idiotic statement. That proves imbeciles still rule this world (full of other imbeciles too).

So, dictator Putin is willing to send 500,000 tons of grain to poor countries. Of course he will. And free gas, oil, coal… if you believe in fairy tales.

I told before that deal to be signed that it will be the perfect screen for CIA covert operation especially when ships returns ’empty’. Now that’s a fact. I bet they will continue till some random ship will get a mine from an Akulla russian sub. I strongly suggest russians to let one of those ukronazi drifting mine to accidentally get one ‘grain’ ship returning with CIA goodies. Of course, let intels to point what and how !

Russia needs to take out the port facilities or the Ukrainians are going to laugh at their threats .

Thx for the good laughs 😆😆😆 – russian BS propaganda is hilarious and now imagine the few idiots believing this crap 😆😆😆 – Fortunately, more and more people consider every statement from Russia as what it is: a ridiculous lie 😉

Give us a break. Our ugly fat pink faces need to consume as much grain as possible because our fat overweight kiddy fiddling western culture loves excess, hence we are professional zionist whores. Ask our pope 🐽

NATO can do whatever it wants without any consequences. All Russian threats are empty words

There is a lot of “nuclear rhetoric”, and the conflict is moving towards the “ultimate consequences” – as history warns. https://patternofhistory.wordpress.com/