The Syrian Arab Army (SAA) and its allies liberated 1300 sq km in the eastern Sweida countryside near the Syrian-Jordanian border, according to Hezbollah’s media wing in Syria. The US-backed Free Syrian Army (FSA) groups shelled SAA positions in the eastern Sweida countryside. However pro-government sources confirmed that the shelling did not cause any losses.

Meanwhile, Syrian and Russian Air Force warplanes targeted FSA fighters near the al-Rushd camp at the Syrian-Jordanian border. FSA fighters area usually stationed near refugee camps along the border in order to hide from the Russian and Syrian air forces.

The SAA advance on the Syrian-Jordanian border can be considered a new failure for the FSA groups supported by the US-led coalition. These groups, despite their modern armament and good training, have not been able to repel any SAA attack so far, nor been able to recapture any area in the Damascus Desert or the Sweida countryside.

This could mean that the US military presence in the At Tanf area near the Syrian-Iraqi border is the only reason why government forces have not retake the At Tanf bordercrossing yet.

Look another failure for the American backed proxies . And btw here I found something for laugh . This is map of Syria by allegedly Saudi Arabian newspaper . I didnt know that East Ghouta and Qalamoun are connected and this thin line between the rebels and ISIS in Aleppo lol 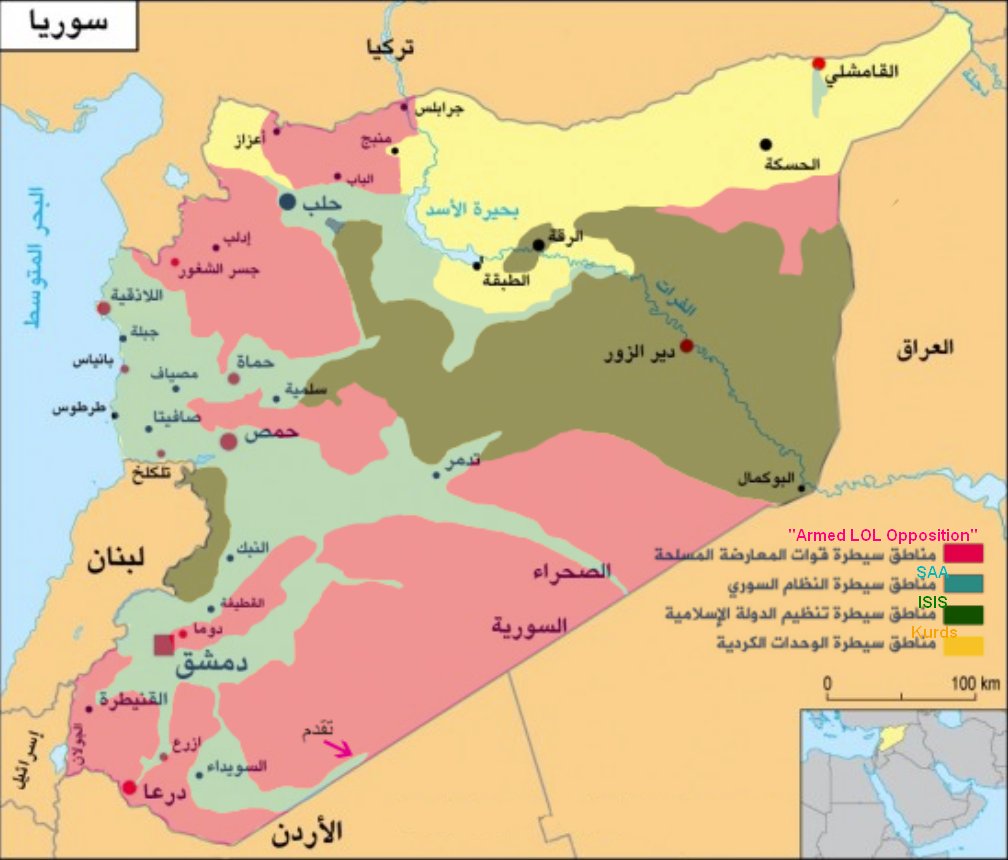 this guy was the one of the biggest enemies of odea to block jordan border :)

American look at war as business ; so to them it’s not about winning any war but it’s about how they can keep it going , USA doesnt peace , coz they create wars in the first place , Life is not of any value to the Americans as long as it’s not their own dying as a result of wars . America has destabilised the Asian world , created problems for European overy the influx of war refuges ,that’s US strategy so that Europe will always be under threat from Terrorism thereby justifying US assistance or the Presence of NATO.

There are some FSA there, Elite Forces, embedded into SDF. They do not have control over the area. Control is YPG/YPJ and Sanaadid

lol they are so stupid!!

FSA and their paymasters are a joke. Such a pathetic drama.

For years now, I had been screaming “Secure the borders!”….

you will be not popular on this forum with such egoistic ideas ;)

Hahahaha, you killed him on the SPOT !!

lol in ur dreams

how is it egoistic??

so. egocentrism, to show, he is wise, suggesting, others not. earlieer some thegr8rambino wrote me such things :P

is the first video of SAA or the second? either way very good congrats to SAA :))))