The Syrian army has reportedly recaptured the strategic Harabesh Mountain (Jabal Harabesh) in the city of Deir Ezzor, besieging ISIS units in the workers housing area which separates the government-held pocket and the Deir Ezzor Airport.

If the army seizes control over Jabal (mountain) al-Amal, it will have a fire control over the supply road to the Deir Ezzor airport. This could become a turning point in repelling the ongoing ISIS offensive operation inside the city.

Clashes are also ongoing in the area of the cemetery where government troops have launched an advance against ISIS terrorists, according to pro-government sources.

Earlier today, the army repelled an ISIS attack on the Panorama Checkpoint, inflicting major casualties to the terrorist group. Abu Yousef, a top member of ISIS, was reportedly killed during the clashes. 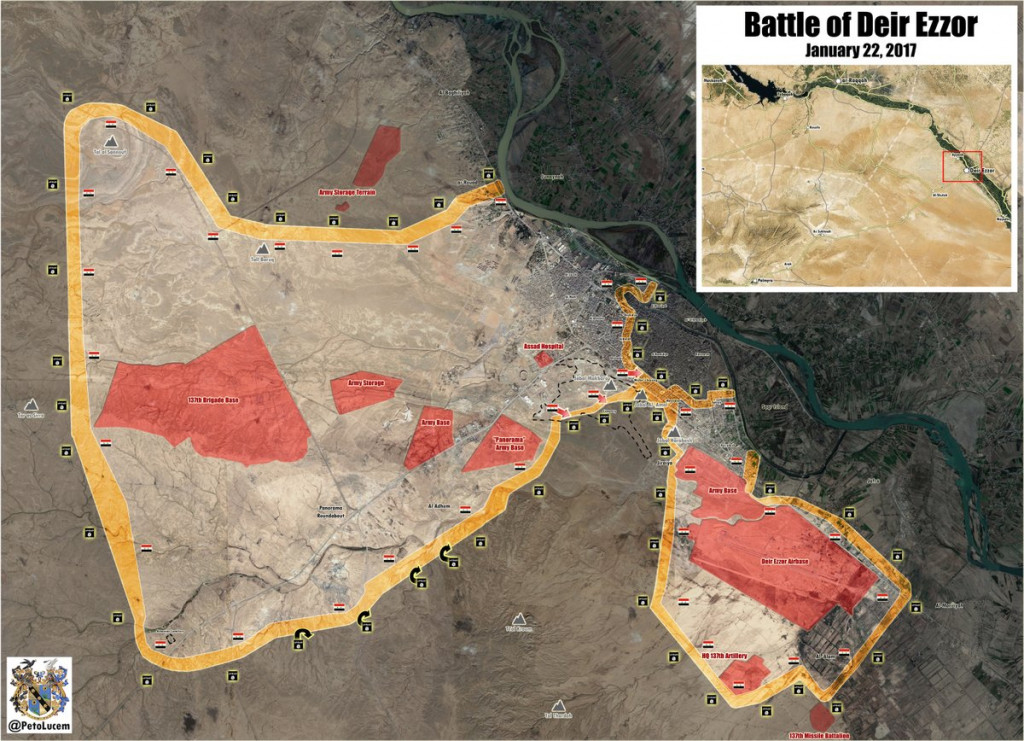 I hope so, so long as there is not beyond a critical mass of meat.

It will be a meat grinder when the wedges are properly reinforced with interlocking fire coverage. Airlifting about 2000 seasoned troops with an ample supply of recoiless rifles and ATGMs will reinforce the area well. Also airdropping BMP3 and light/medium artilery will only increase the firepower volume from the ground.

They should recapture the link between the bases and if possible Russia itself should reiforce Deir Ezzor with some of their elite forces and artillery, this city cannot fall or else there will be a higher danger of balcaniztion of Syria.

Yes, the tide may be turning against ISUS in Deir Ezzor. Their casualties are mounting. Also reported that SAA 104th airborne brigade is staging into 137 base area from Damascus area by helicopter. This is good news!

Why this nonsense? None of the ceasefires has EVER applied to ISIS. Or Al-Nusra.

He says it whenever he gets the chance.

Remember Aleppo ceasefire and the Palmyta lost.ISiS and moderate rebels are the same terrorists

The Aleppo ceasefires never applied to ISIS. None of the ceasefires has ever applied to ISIS. Palmyra was lost because the SAA and Russians were caught taking a nap with their pants down because they were totally focused on Aleppo. And nothing else. That’s what you get when you neglect your other fronts. You might and most likely will get ass raped in unexpected places.

Or was neglecting Palmyra and Deir Ezzor Lavrov’s fault as well? Crafty dude. Does a lot of sneaky shit when you’re not looking.