Over 900 members of militant groups have been killed, dozens pieces of military hardware have been destroyed, 105 city quaters with (78.5 square km) have been liberated during the offensive operation in Aleppo city. 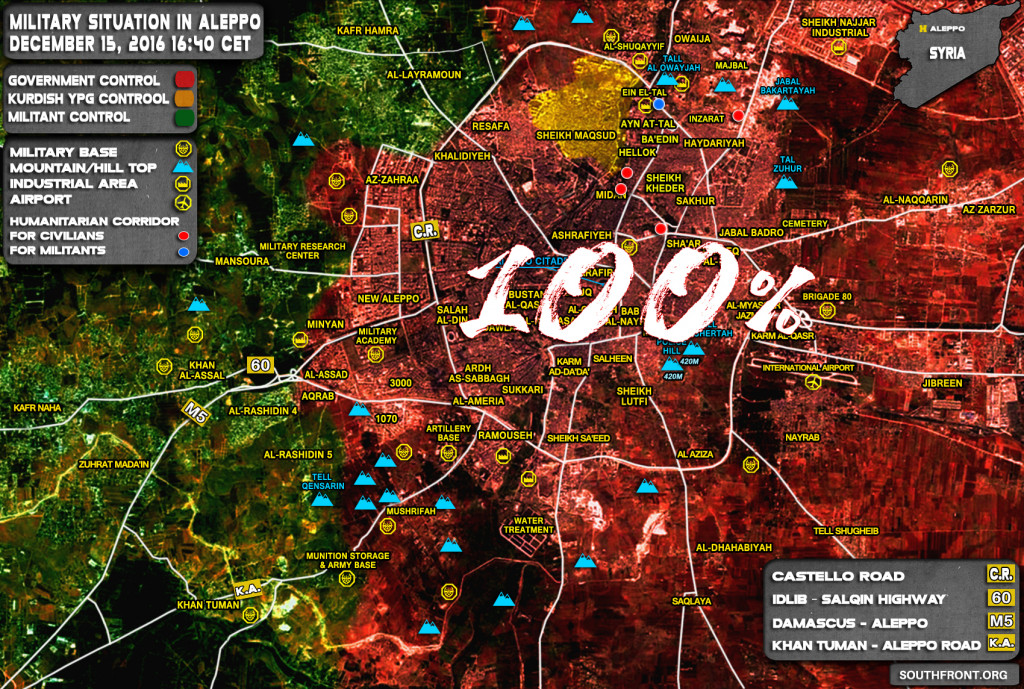 The Syrian army has driven militant groups out of the Aleppo areas that remined under their control, First Deputy Head of the Main Operations Department at the Russian General Staff Lieutenant General Viktor Poznikhir announced on December 15.

“The militants have been driven out of all the quarters that remained under their control as a result of the Syrian troops’ offensive. During the operation, over 900 terrorists have been killed, dozens pieces of heavy weapons and other military equipment have been destroyed,” the general said.

Poznikhir added that “105 city quarters with a total area of 78.5 square kilometers” have been liberated by government forces since the start of the offensive in November, 2016.

Over 3,000 militants have withdrawn from Aleppo under the agreement with the Syrian government. Over a half of the militant have been pardoned by the government.

“A total of 3,033 militants have left Aleppo voluntarily, 1,524 of them have been amnestied and released, while the rest are checked,” Poznikhir said.

Separately, over 1,000 militants have been evacuated from Aleppo via a humanitarian corridor opened from Salah al-Din to the settlement of Al-Rashidin-4.

to Layramoun first, its the only place from which jihadists can still effectively shell civilians in Aleppo, but just to be safe better build a buffer zone in the direction of Kafr Hamra and Haryatan and as soon as jihadists won’t be guarded in Khan Touman, there too.

Better focus on protecting Qarayatayn in Homs province from ISIS rather than focus on recapturing Palmyra, it will require less resources to hold ground than to push in open terrain against a more mobile enemy.

exactly, take Kafr Hamra, then go to Anandan with the help of the YPG from Efrin would be the first step to aim the west turkish border

No Sir. If most Allied forces leave Allepo, the same mistake will be repeated as in Palmyra and it is exactly what the terrorists and their sponsors are waiting for to reconquer Allepo as they did with Palmyra and to continue doing the same until they wear down the Syrian forces And Russia and achieve their malevolent goals for Syria ..

Yes, but perhaps there might be some troops that can be designated to Palmyra front, as there is no point in letting the airbase fall to the terrorists.

Some troops will not make much difference on either side. The proof is that the large concentration of troops necessary to take allepo instead of some. The same applies to Palmyra I fear. I only try to be realistic foreseeing the worst while I hope that everything will be resolved for the sake of Syria and its faithful allied Russia my friend.

Terence, Palmyra is NOT like Aleppo.. It is wide open in the middle of the desert…

Flanking and encircling is the way to go….. NO direct attack along the major highway coming into Palmyra from the west, for that is what these criminals would expect..

If the reports are true, to face and counteract the more than 5000 well-armed and trained men of ISIS plus who knows how many more on the way fleeing from the same Mosul and Raqqa I doubt that with a few tactical maneuvers can accomplish much the Syrian army And their allies in the field. If it were that easy, I believe that something had already been done to reconquer Palmyra for almost a week from the attack of these terrorist wounds by the symbolic importance of the place both for Russian pride and for the rest of humanity in terms of history and architectural art it means

I have to imagine the negotiations won some secret concessions. On the surface it looks like a bad agreement.

These 3,000 abandoned their homemade artillery in aleppo and will now have TOW weapons in Idlib.

look, SAA and russians are fighting a war for hearts and minds of syrians in occupied zones. their “meek” conduct that is such due to care for civilians will hopefully pay large dividends in the future.

I kind of remember this article being more detailed … https://southfront.org/govt-forces-control-100-of-aleppo-city-russian-general-staff/

I went through all of my SF bookmarks to find one that gave a summary of statistics on Aleppo including the total number of civilians who were able to leave the Eastern Aleppo pocket and that the number was something like 104,000. I was making a point of keeping track of how many civilians were located there since it was a common meme that ‘250,000 civilians were trapped in Eastern Aleppo’.

By comparing the civilians who were actually found vs the number the number given by the dreadful London Observatory of Syrian Human Rights, I was going to use that to show how the statistics on Syria are inaccurate and used for propaganda purposes to inflate civilian deaths.