The Syrian army and Liwa al-Quds have seized significant areas in the Al Sakhur Neighborhood after the liberation of Jabal Badro Neighborhood, according to local sources.

Intense fighting is ongoing between government troops and Jaish al-Fatah militants. However, Jaish al-Fatah doesn’t have enough defenses in the area to keep it significant time. So, most likely, the area will fall into hadns of the Syrian army in the coming hours. This will split easten Aleppo pocket into two separate parts.

Pro-government sources argue that the whole Al Sakhur Neighborhood is already under the control of Syrian army, but this cannot be confirmed by neutral sources. Pro-militant media outlets say that Jaish al-Fatah is “strategically withdrawing” from parts of northern Aleppo. 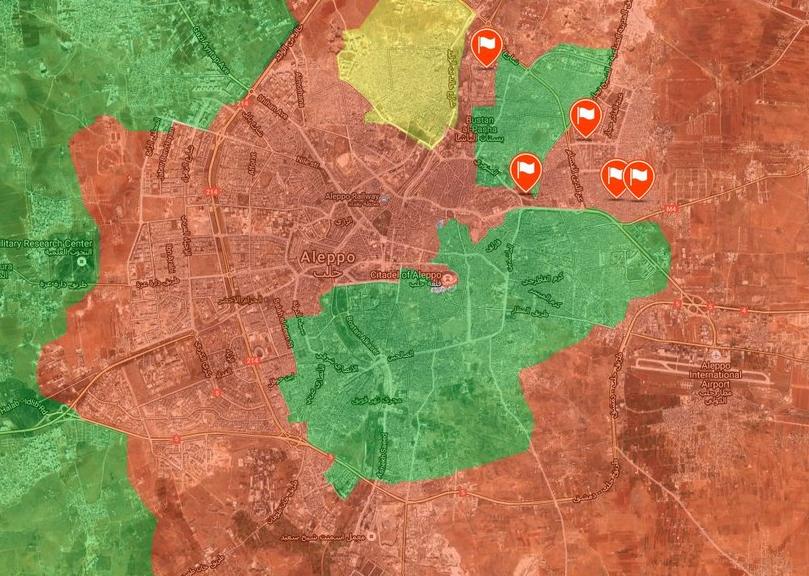 Ok, if they keep this pace this will be some Fall of Saigon level urban offensive

Oh My God I am so happy so see this, My heart will rejoice like a bird freed from a cage once I see this city liberated from thes evil terrorists.

It’s beautiful!! I just got a new PS4 and a new tv, and I thought that they were beautiful but this, THIS, is what I call beautiful!! Now to Liveuamap to taste the salty tears of terrorist lovers. Let’s see what they have to say in response to such glorious news!

The terrorists lost 4 districts for only 3 days.I didnt expect this.If this continue they will be finished before Christmas.

Lets hope so – with the minimum loss, of innocent civilian life too.

I think only attacking north part was a mistake as SAA let the rebels withdraw and save their resources for the lower part defenses later on. They should have divided pockets first and then go for the upper part.

In any case good progress but bit more of strategy could save more SAA and civilians lives.

They attacked elsewhere, too. But I think they were diversionary attacks, or maybe they could not make progress. But there were simultaneous attacks elsewhere.

I might be wrong but I think the SAA launched several offensives at the same time just to get sure they manage one breakthrough and capitalize on it. A similar strategy was used during the closing phase of the Vietnam War and may had been used in Europe had the Cold War went hot.

Likely they were probing.

They run to a more dense pocket, meening that they are trapped ina smaller pocket. Their options are more limited and they will die in bigger numbers. Trying to hold a thin line between two pockets could als cost more for SAA. SAA are cautios and they are performing well.

I dont think at this pace of SAA these head chopper rats will even stay till Christmas…………… These rats wont have to wait that long to meet their share of virgins……….. I am so happy for SAA’s success. I am sure these rats wont put any resistance even in south as it is clear that they are low on manpower and specially ammunition……………… Thank got its transition phase in US otherwise Kerry must have started shouting ceasefire by this time.

Let’s hope it happens while Obama is still in office tso he is forced to see justice as Syran wins. It’s unfortunate that he does not stand trial for Nuremburg crimes.

This is a massive strategic defeat for the so-called “rebels”. The Syrian state is likely to act like a steamroller now, restoring itself over the cold corpses of US advisers and the puppets they had tried to prop up in Syria.

Beautiful! I love it! Smack the shit out of them!

Good! even if the terrorists escape south and it turns into a protracted “Jobar-style” situation of sorts, smaller pocket bring many benefits: front lines are easier to man and guard frees up the besieging troops, which can be sent elsewhere (like Al-Bab) more troops on less area also can mean constant attacks, where you rotate the attacking troops and keep constant pressure but defenders dont have the luxury of rest – nor fresh ammo.

the south IS very heavily fortified, but i believe here it’s crucial to attack the human potential of terrorists by constant attacks should to wear them down and make them go out of ammo.

btw. i don’t believe there will be “shaving beards and escaping” situation, because a young man in government-controlled Aleppo which is NOT mobilized sticks out like a sore thumb. good luck explaining it to kind guys from military intelligence.

I will wait to congratulate sirian army until they take total control of Alllepo. For the moment, I just can say ….well done, continue without stop, ignore such no-senses humanitary UN-USA-OTAN observation. The hearts of many-many people in the World are with you.