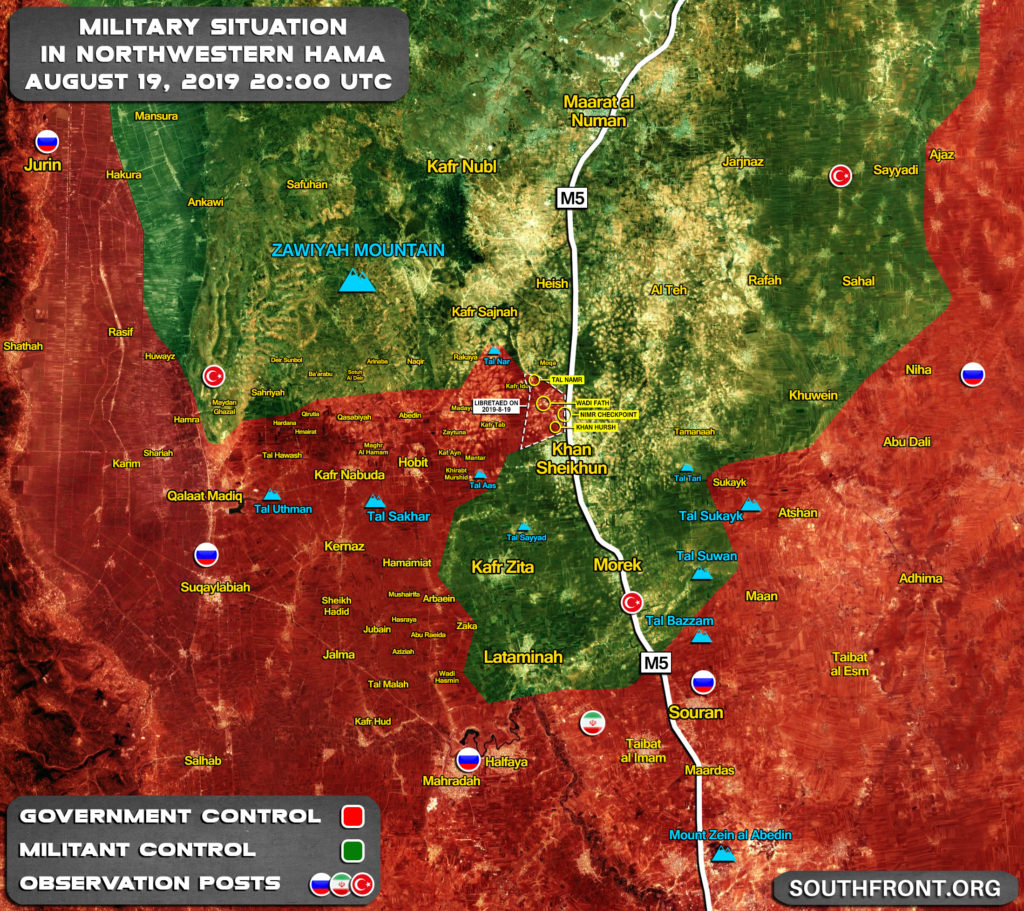 Late on August 19, the Syrian Arab Army (SAA), the Tiger Forces and other pro-government factions started storming the town of Khan Shaykhun in southern Idlib.

Earlier on the same day, government troops seized several important hills north of Khan Shaykhun and cut off the M5 highway, which Turkish forces attempted to use to enter the town.

According to some pro-government sources, members of Hayat Tahrir al-Sham and other radical groups have started withdrawing from Khan Shaykhun. Reports are also circulating that militants are planning to withdraw from the entire northern Hama parea. Nonetheless, these reports still have to be confirmed. 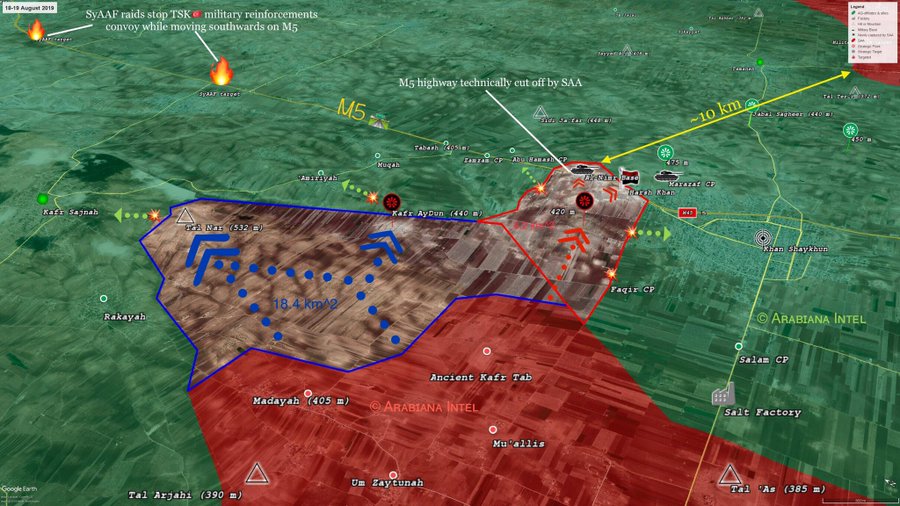 Let’s see the rats desert the sinking ship. Good to see the SyAAF laid out a welcome mat for the arriving relief convoy. Must have lit up their day.

Oh, great. So turks didn’t reach the town to reinforce their murdering friends. And now they are pissed off. Good, good. Today I tried to find out what turks left in the history in the last 600 years and they built… nothing. All they did was stealing from others and murdering others. Dirty nation.

I had posted the closure of M5 about 30 hours ago, when the Turkeys were trapped and hit by a warning Russian strike that cooked 3 Turkeys and wounded 8 and 2 APC and one Toyota hi-lux were vaporized. Let’s keep perceptive here, the Turkey scum losers are in Syria illegally and are savage mongol invaders and fuckwits and the government of Syria and its allies have an obligation to expel all invaders from their lands and they will. The second glaring FACT is that the area of north Idlib under Turkey morons and their headchopping terrorists occupation is very small and about 1300 sq kms left or about the same as Zionist occupied Golan. The Turkeys seriously miscalculated the SAA and Russian resolve to expel all illegal invaders. The area now is barely 30 kms long and 15 kms wide and growing smaller by the hour as the SAA will now secure the eastern side of M5. The Russian airstrike followed up by low flying armor hunting gunships put the Turkeys to flight.

They’ve picked up Arab, Persian culture and spread that. They’ve build, but in the days of Fatih. Those days are GONE. Forever.

You are correct, the Turks are savages and have no culture of their own. They borrowed everything from Arabs and Persians, both of whom have old established distinct cultures, language and unique religions. The Turks are just roaming Anatolian nomadic tribes and peasants and their Ottoman Empire was basically built on kidnapped Jannisaries and Persian soldiers. The uncivilized idiots even changed their Arabic alphabet to Latin script to please the west. Turks are worst of the lot and more like Zionists.

Well i agree apart from saying the core of the Turks was from Mongolia and then maybe mixed with Anatolian converts to Islam.

We were told that Syrian planes shot up the turco motorcade now we are told it was russian. who do you think did it and why?

I usually don’t trust the first reports, as far as all of Khan Shaykhun liberated? I would expect the rats to fight to keep the back door escape route open, unless the south is vacated already. :)

People were reporting a few days ago (as much as Twitter can be trusted – I know…) that Khan Shaykhun was a ghost town. No food, water or electricity (except for the head-choppers), a thoroughly pissed-off 4th AD, Tigers and RuAF coming to visit… it just wasn’t worth it. Even the White Helmets bailed out. Just a few left-over local head-choppers to man checkpoints around the city for the last few weeks.

Sounds like the head-chopper strategy through the weekend was to defend the original fall-back, second-ring defense around the Turkish ‘observation post’ south of Morek. Second ring: basically Morek, Latamanah and Kafr Zita. Head-choppers froze a few days ago and failed to react (aside from the lucky few who deserted and ran) and just sat there when the SAA got rolling. Civilian refugees were reported making their way up the M5 into Maarat al Numan, but nothing like a mass exodus and no reports of mass head-chopper fleeing. I think a lot of the head-choppers are still there and too delusional to flee. Must be the Captagon. Fine with me. Advice to SAA: to get rid of the black death plague, you have to exterminate the rodents… all of them. No cages, sorry.

Oops! Erdogan is fuming :) but he can’t even complain about it. If he does than he will hear – ” You were the guarantor that terrorist rats get the f$ck away from demilitarised zone. Reap what you saw/”

Word. And nice to see my remark about the tactic did not go unnoticed. :)

Erdogan is a terrorist himself

As the rats are trying to run away the SAA must deal maximum amount of casualties to them as they flee!!!

SHABIHA will do that, SAA needs rest

Russia must help a lot if they use its airpower.

– and now shabiha goes in to finish the job

WHAT western terroist , all of em are from muslim countryes idiot

Are you a Complete Fucking idiot???!!! They are Satanic Devilworshipping Jewish House of Saud Wahhabi Shitheads… Masonic Muslimbrotherhood Cocksuckers…Al-Qaeda-Mujahideen-CIA-Faggots…. Greater-ISISraHell-Caliphate-Kidkilling-Paedophiles…. But for Shitsure NO MUSLIMS…

All this false Arab springs are just for one of the main stakes: To destroy Syria, because it supports Lebanon. Just remember, not so long ago when Bush in the midst of the Israeli defeat in 2006 said in open microphone to Blair: “Just got Syria stop doing this shit…”.And everybody knows what ‘shit’ was/is that.

How about western supported terrorist and Jihadist, does this sound better ?

where is the confirmation ?

Actually, the SAA and allies have moved 3 kms east of Khan Sheikhun and are moving north, the headchoppers took the brunt of very precise and accurate Russian bombing strikes, the Turkeys miscalculated and were desperately trying to reinforce their terrorists but chickened out when Russians blew the lead column to bits.

That is great news!

GO…GO…GoO TIGERS EAT THEM ALIVE!!! MAY VICTORY BE WITH YOU ALL…

LET THIS BE A LESSON FOR THE AMERICAN & EUROPEAN SHEEPLES….THEIR ELITES ARE NOTHING!!! I BET YOU CAN OVERTHROW THEM JUST LIKE THAT!!!

YEEHA! Already went to sleep, could not, and stood up again to check the latest news. With the current use of night raids, i guess tomorrow morning we will all have a BIG smile on our faces! Cheers.

That was good, thanks.

A marriage made in heaven

funny! Have u seen the Syrian Army guy with the injected fake muscles? He used some kind of oil to make them look massive! Id say that guy in your picture is just a keyboard monkey and probably a reservist! No way he can fight in a war!

SUMTHIN’ TO BE REAL PROUD OF SON… HALLELUJAH PRAISE THE LORD…

Im Australian! i am going to rank each picture BUT IN COMPARISON TO WHAT ISIS DOES! 1st pic — that is a man and a women 2nd picture —- nice picture of a women and a child (someone wrote over it) 3rd picture — a soldier following orders (US govt at the time was very very bad) 4th picture — in war people take pictures next to dead bodies! Australian Special Forces used to wear enemy ears as a necklace! War is ugly. at least they dont behead people while still alive! 5th picture — not sure i even believe that picture! Photoshop? 6th picture– actually these photos were staged by the CIA to create ISIS! This info came out! Got the former Sadam Republican guard all reved up and ISIS was formed! 7th picture — The gold in Iraq, most wars have a winner and the winner takes all! 8th picture — Again staged (but real too) by orders of the CIA to help form ISIS (future plans set)!

Dont u remember the famous interview where and honest general said he got a memo that stated all the countries they were going to invade? the Memo listed “iraq, afghanistan, libya, somalia, sudan, yemen, syria and finally iran!

These pictures were the PUSH they needed to create ISIS which would then give them the excuse to invade!

So why are u showing me CIA photos? i know they were bad! Under Trump all is good!

Kill the head-choppers or let them flee into Turkey? What a decision! It would be wonderful if they infiltrated Turkish society and were Erdogan’s problem. It would be even better if they could be locked into Israel to live there and meet their zionist commanders.

Even better would be to settle the headc hoppers in the US’s leafiest suburbs with their political masters.

The west is busy with Hong Kong and Navalny’s protest in Russia. Nobody is talking about the protest in Brazil, Honduras and the colapse of Argentina.

God bless the SAA and Russia god is with you guys and every sane human citizen in this world.

BEIRUT, LEBANON (10:20 A.M.) – The Syrian Arab Army (SAA) has denied entering Khan Sheikhoun in southern Idlib, despite some claims by both pro-opposition and pro-government activists. This ten hours after many are claiming Khan Sheihkoun has fallen so guess it is a matter of wait and see if the victory is a little premature. It is also said some minor groups have left but HTS and Raise the Dead remain.

Thanks god for the Russians, keeping the Turks out the way for the time being, yet all that Turkish hardware will end up in terrorist hands if they don’t tag it for destruction. A special forces op could take out the guards and bring it to the Syrian side. The Americans must be so pissed off seeing their “freedom fighters” getting killed and driven out. Perhaps they will escort the rest of them to Central Asia where their in the middle of another nasty “uprising”. The US and its Christian people appear to be trapped in evil and the sooner they are destroyed or wake up the better chance the rest of us have of surviving with some freedom.

Do NOT allow the Wahabbi dog-fuckers to withdraw. Kill them all, every last one of them. We want REVENGE for every single loyal Syrian who has fallen in the struggle against Wahabbi evil.

The Ottoman outpost will soon be surrounded. A sort of 21st Century Ft Sumter. Don’t make the mistake of firing the first shot, like Beauregard did. Let the outpost wither, allow resupply only after shipments land for inspection by SAA or RuAF.