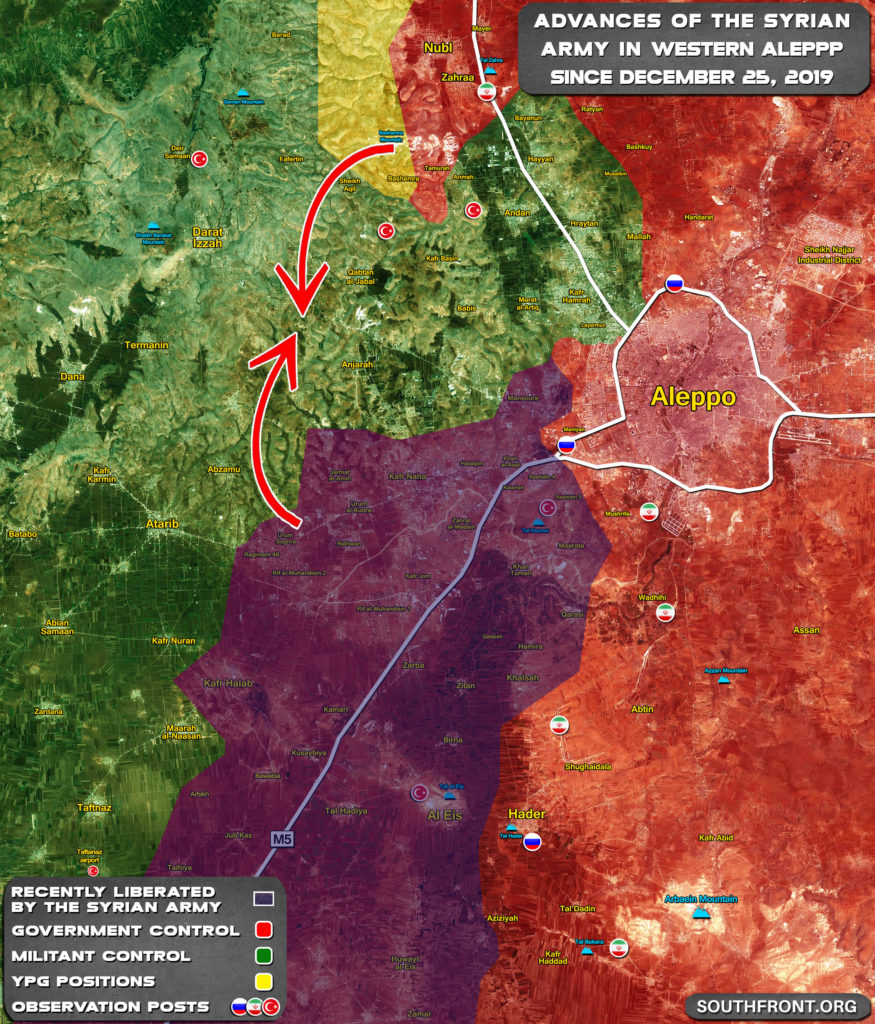 Units of the Syrian Army and other pro-government factions are advancing on positions of Hayat Tahrir al-Sham and other Turkish-backed militant groups in the province of Aleppo.

Since December 2019, government forces have liberated a large area in western Aleppo and set conditions for future offensive operations in the area. And such actions are already being conducted by government troops.

If the situation develops in this direction and further, the Syrian Army and its allies will cut Hayat Tahrir al-Sham’s defense in the area into several pockets and clear the entire western countryside of Aleppo city.

I feel sorry for your grandfathers, I would probably consider being a fag too if I only had Turkish women to choose from. Turkish men are basically women anyway.

you don’t have that choice, because if your grandparents had met us, it probably wouldn’t have been you.

Here’s very stupid turk… in fact the only state in which a turk can be found…you goat fucker..

klove and light
Reply to  Hatersgonnahate

ps. your pathetic degenerate jihadis and their Brothers in TAF_(the Turkish armed Forces) are sure getting their turkish assholes torwn apart by SAA and hezbollah..lololol

Hatersgonnahate
Reply to  klove and light

I don’t support Erdogan. I support my government. Even if my country does bad things, my national sense ignores them. I’m not a fanatic and I never will be.I support my country and I will do everything I can to make it eternal.

Saying your country, right or wrong, is like saying my mother, drunk or sober. Worst thing you can do for an addict is to give them unconditional support because they will take you to the cleaners to fund their addiction. Similarly supporting the immoral and destructive behavior of your government only enables it to cause more of it.

Personally I piss on my government. I like my country, but since I am a white man my country doesn’t seem to like me and loves to walk at the leash of the US. So fuck my government, I’ll take care of me and of my loved ones until some sanity returns.

… You contradict your own words inside 2 sentences… … and you are telling the other fella off for not using English properly…!

hahahah… Learning to spell and learning the grammar is one thing but using brain matter is another…good luck with the latter.

then you need to go back to turkistani…

Armenian genocides, you support bad things of your government, does this have to do with ignorance ?

There is no evidence of the Armenian genocide. Saying something without proof shows your ignorance.

Except 1,6 million killed Armenians, their houses destroyed and their land populated with mongols. The proof is historical: how many Armenians were in Turkey and how many are now. This is valid for Christians in general, as well.

Hatersgonnahate
Reply to  klove and light

by the way, you need to learn English as soon as possible.

the sins of the fathers have to be repayed…

Turkish haters will live in this moment.

Who is the honourable and established nation ? Turkey ? hahahahahahhaaaaaaaaa

Turkey the only country that instead of history has a criminal record!

Yeah …yeah…You…You are an honourable and established nation !!!

Atatürk’s word after the occupation of Istanbul by the Entente forces.

“They go as they come”

You have no history because you are slaves and puppets.

TURKEY, A SYNONYM WORD FOR : GENOCIDE

How do you think, where did Halil Kut got 620 kg of gold in 1920 to pay salaries for soldiers and a lot of weapons and ammo. If you ever find the answer, just compare what did Ataturk and what Erdogan does now. Hope Erdogan will get his wisdom back.

Correct approach by SAA. Create packet and clear packet. After the packet is clear this will shorten SAA front line and provide additional resources and hardware to another front line

The pincer movement is prerequisite of how they Russians outmaneuver their enemies,cutting their supplies first and then suffocating them….Look at the Turkish outposts being closed off and then choked. We are being told that the Turks are moving in well it’s clear they are actually withdrawing…Hahahahhahahhaha

its called getting your seeds clicked..

Aleppo finally is getting its buffer zone.

That and the important industrial districts.

they are totally destroyed :(

Thank you very much for your service in liberating Syria of all NATO headchoppers. Every time you eliminate a terrrorist, you make USA.EU/ Turkey fume with rage. YOu shut the door to their imperial projecet/.the Great Yinnon Plan, VaVavOOM PATRIOTS.