On January 17, the Syrian Arab Army (SAA) and the Tiger Forces, backed up by the Russian Aerospace Forces, captured the village of Batha northeast of Tell Maish in southwestern Aleppo, according to the Hezbollah media wing in Syria. Earlier, the SAA launched an attack against HTS and its allies in the villages of Ziyarah, al-Hayniyah and Abdat al-Shaykh south of Batha.

Meanwhile, Syrian oppositions sources reported that Russian and Syrian warplanes conducted dozens of airstrikes against the positions of HTS and its allies in the towns of Khan Shaykhun, Maar Tahroma, Kafr Nabl, Saraqib and Maarrat al-Nu’man in southern Idlib.

From its side, HTS and its allies didn’t conduct any operations against the SAA in southern Idlib. This indicate that they suffer from a lack of manpower on the frontline once again.

The SAA is currently working to reach the Tiger Forces around the Abu Duhur airbase from the northern and the eastern directions in order to besiege HTS and its allies inside the airbase and in the northeastern Hama countryside.

The map is useless; where is it and that has happened?

there is a red square around the town

It’s that prong NE of the airbase growing larger.
The red square is hard to see.

It’s the relationship between the map shown and the rest of the Idlib pocket I need to see.

Check Petolucem for maps and ISWN they may have more.

What happened it was a diversionary tactic to Sinjar while HTS/ISIS the Levant Liberation Board, made for the gap as that’s where all the fighting is going on right now on that flank.

If Al Nusra and its ‘moderate’ Jihadi allies are nearing exhaustion this would be an excellent time to push on after taking Abu Duhur. Don’t give the bastards the time to recover and regroup. What are their Turkish patrons going to do? Use harsh language? Like with the Kurds in Afrin? 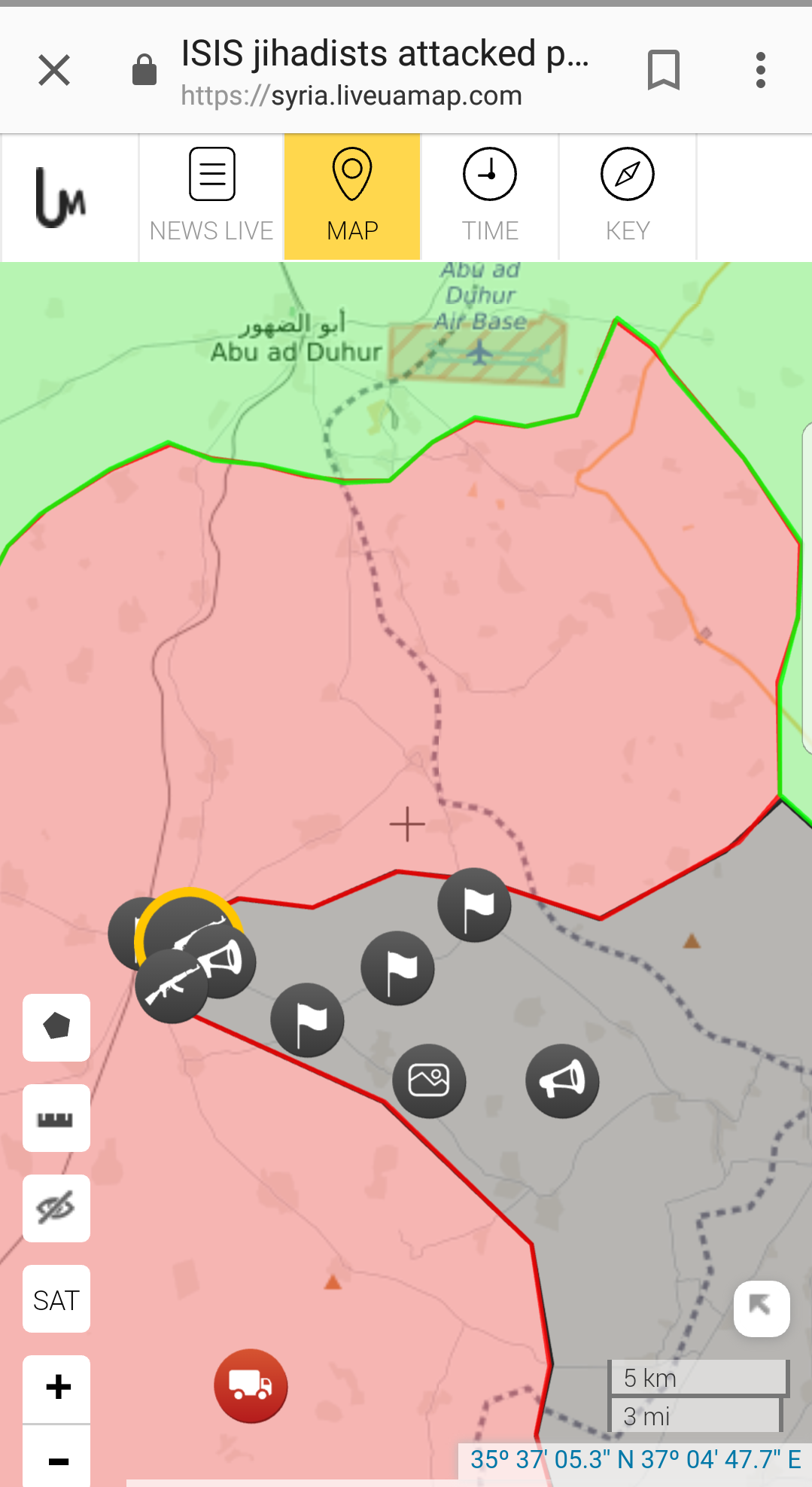 What is going on?

The only thing for certain is they are attacking in the center and not the heavily fortified and manned flank.

I am glad about that bro

The SAA kill the FSA commanders in battle and they call it assassinations in the west.

I call it taking out the garbage

ISIS made claims of attacking this area as they are working with HTS as they are jointly called Levant Liberation board. They have been pushing for the breach always and all that other stuff was psyop to dishearten the SAA in their advances. Amaq you can’t trust as a source as it is an intelligence operation sending out propaganda from Riyadh.

looks like this was terrorist fake news. I hope so and would not mind if SAA and allies purge the pocket and terminate all rats inside the sooner the better now HTS seems to be exhausted on the other flank

Before targeting any village, town or city the Syrian and allied forces should have to inform all civilians to leave the area because tomorrow that area will be targeted.

Syrian government should have to make it compulsory for each and every citizen to get military training for self defense strategies. For this Syrian army should give some military training to 50,000 young men and women teachers and students just for one day each month. Take them all together to a big stadium in Damascus along with military bands and loudspeakers and do military parade on them with drone cameras.

There are many benefits of this project for example exercise, entertainment, to demoralize enemy, self defense during war and to encourage Syrian nation to willingly join Syrian army SAA etc.