Government forces have slowed down their military operation against militants in southern Syria amid reprots about resumed neogiations between armed groups operating in the province of Daraa and the Damascus government.

Over the past week, the Syrian Arab Army (SAA), the Tiger Forces and their allies have liberated the area of Lajat andv have advanced east of Daraa capturing the villages of Kahil, Masayfra, Sahwat al-Qamih and other points. They have also advanced northwest of the city of Daraa, but there the SAA has achieved much less gains.

The rapid SAA advance triggered a series of demonstrations in the militant-held areas and declarations by over 15 villages that they join the reconciliation agreement with Damascus. However, no fully-fledged agreement has been achieved yet.

If the agreement is not reached, government forces will likely resume their full-scale military oepration in the area. 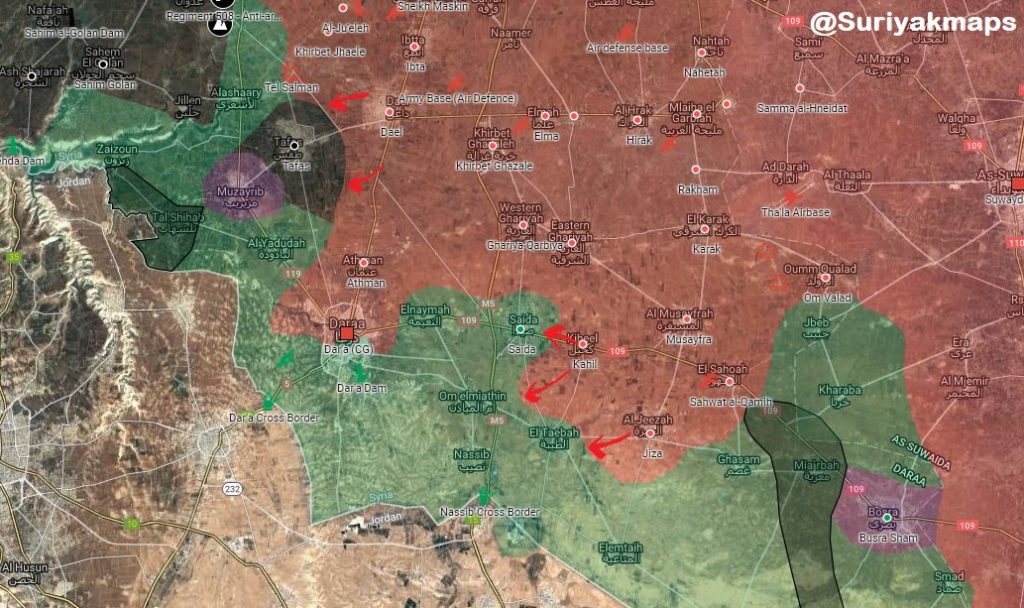 I reckon SAA units need a day off to recover and regroup, all the while letting the Jihadis stew in their own juices of fear while the locals hound them for a reconciliation deal.

Or……Israel/Jordan are working out withdraw of Takfiri, …..probable Israel wants none of them back . Takfiri knowing deals are being cut at their expense will not be as devoted to death .

If Israel gets to keep already stolen Syrian Golan + more afterwards, The Fix was in since Netanyahu left Moscow

Yes and they are being sent to the West and Europe come Salafi and Wahhabi trash all dregs of Muslim brotherhood. Bibi will never get the Golan already heard Putin gave him can’t help you’re on your own, why they are trying to meet again.

Israel never stole the Golan it’s the spoils of war. The same can be said for the history of mankind taking over the land of others. The simple thing for you to know is your MaMa and Daddy are not who you think they are. The gene pool has to be changed or the inbreeding decimates the particular group.

They were looking for mines and booby traps takes time to clear towns , Borsa al Sham and 27 settlements declared for reconciliation.

As the child butcher Netanyahu give green signal to these terrorist to surrender to SAA, then they will surrender.

Crush the cockroaches… then load their heads into trebuchets and launch them into Zionistan.

NUTANDYAHOO and his bolshevik killer henchmen must be in nightmare land at the prospect of Syria reclaiming it’s stolen lands.They will get payback soon enough for their war crimes against the Syrian and Palestinian people.

Many run the Israeli government happens when you have many bigoted fascist citizens.

“SLOW.DOWN” because they come into the reach of Israeli artillery and other short-range weapons. They have to take care first what that f*king Israel is doing. The Russkis will give some satellite-pictures to know better what moves “on the other side” and then they may continue

Who controls the two purple villages?

Russians to be honest clearing mines and securing weapons.

Just not technically cleared of any bombs or booby traps.

Why not? They’ve been busy.