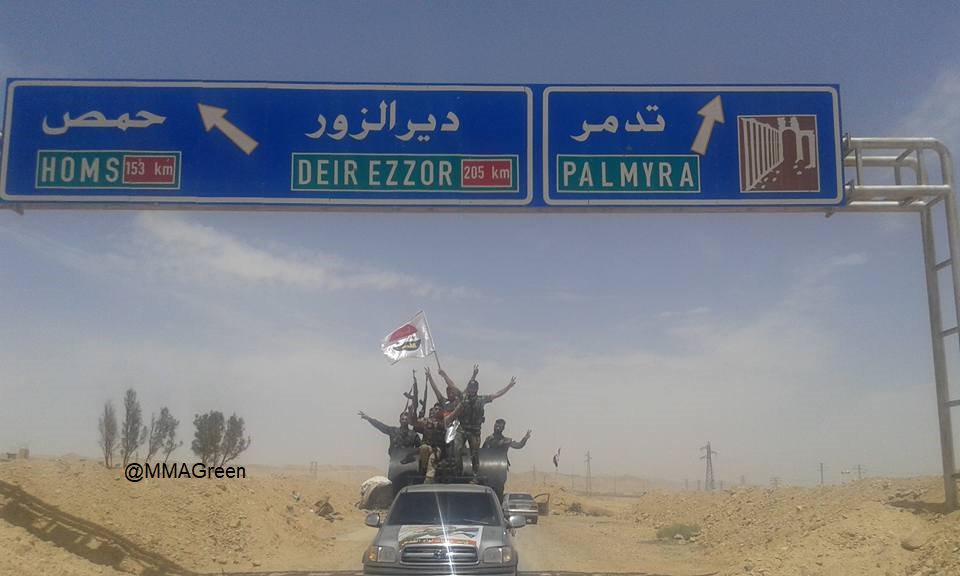 The Syrian Arab Army (SAA), Liwa al-Quds, the 5th Assault Corps and the National Defense Forces (NDF) have resumed their push against ISIS east of the ancient city of Palmyra, aiming to take control over the village of Arak and the nearby Arak gas field.

According to the Liwa al-Quds media wing, government troops have advanced 3 km northeast of Palmyra and entered a number of hills in the area north of Arak.

With this advance, government forces are going to outlfank ISIS units in the area of Arak and to set a fire control over this area. If this is done, the SAA and its allies will regain these sites soon.

Earlier this month, Liwa al-Quds deployed a number of its units to the countryside of Palmyra in order to support the expected government forces advance in the direction of Deir Ezzor. The Syrian military has been seeking to lift the ISIS siege from this strategic city for a long time.

These guys on the picture are driving in the wrong direction ……

Just for the picture, vehicles behind them are moving in the opposite direction. Selfie’s have their own rules of posture.

What vehicles? I can see only one stationary sedan in the background with an open door.

Speaking of road signs, I’m always amazed to see dual language road signs in Middle Eastern countries like these. Imagine wanting to add Arabic to all road signs in Europe. One half of the continent would explode with rage, the other half would think it an excellent idea. Much craziness would follow.

The reason why you see dual language road signs, is so that the US army knows where they are ?

The Liwa al-Quds force, made up of Palestinian refugees, are true heroes. When this is all finished, everyone will recognize what they have done. And al Quds themselves, will remember which Arab countries stood against them and aided the enemies of Syria. If I were the King of Jordan, I would be especially worried.

This is the right front for SAA to be reinforcing, to fight ISIS, not Norweigians at Al Tanf! They can go straight through Dier Ezzor to Iraq if they put everything here.