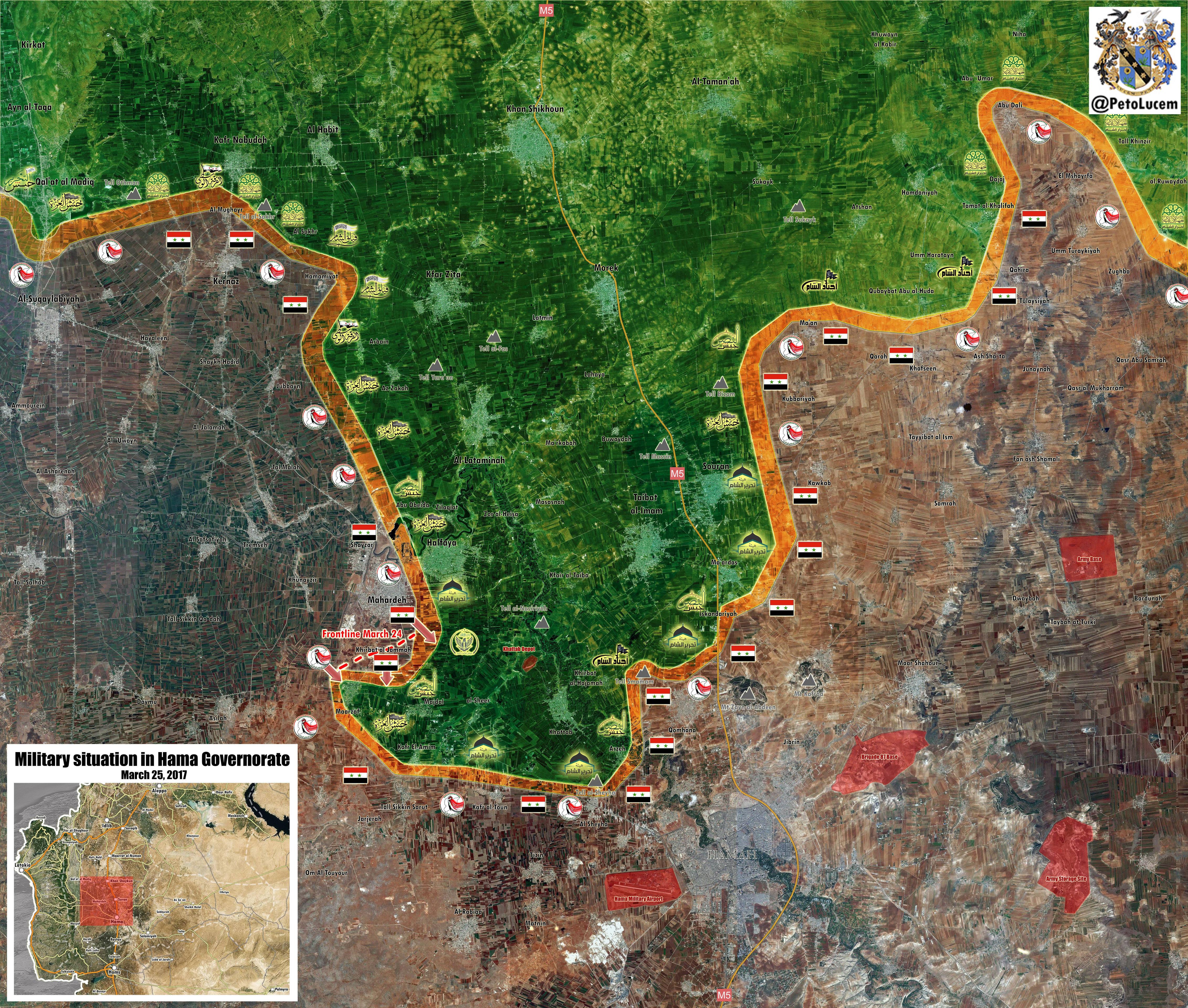 According to several sources, the Syrian Army was able to enter the town of Shaizer north of Mahardeh and is currently working on securing it and its overlooking citadel. Government forces also recaptured Khirbet al-Hijama.

HTS’s operations had slowed down in the region as the terrorist group is forced to go defensive in the recently captured areas. The US-backed moderate opposition group of Jaish Al-Izza continues providing support to HTS’s operations with its large stockpiles of TOW missiles.

At least 5 SAA soldiers were killed and other 9 were injured as a result of TOW missile strike in Ma’arzaf village.

In a separate development, the FSA-affiliated Jaish al-Izza claimed to destroy a Russian-made T-90 tank using a TOW missile. However, the released video shoowed a T-62m tank operating by the 5th Corps. Its crew members survived the attack. The tank itself would be restoored soon.

Russian Air Force continues to target HTS forces across the Hama countryside. 6 fighter jets and 4 gunships delivered airstrikes against HTS fortifications and points at the frontline.

The SAA counteroffensive is expected to resume soon as further reinforcements from Qalamoun Shield pour into the troubled province along with a batch of TOS-1A heavy flame-thrower systems.

Encircle them, they are already broken, you have fighters from other areas that moved there from the ceasefires, they know what it’s like and would do anything not to be besieged again.

Their momentum is dead like in Damascus . Now SAA must draw plan to capture whole North Hama . I hope SAA doesnt rush and just capture the lost territory in the rebel offensive . They need whole Hama

I thought they already recaptured all lost territory?

Oh yes not in hama. In Damascus they did right?

You’re thinking of the Damascus front where (according to most sources) all lost territory was recovered, I believe the counter-offensive is still running.

There isnt counter offensive anymore . There is offensive . SAA captured buildings in Jobar for the first time since 2013

Yes I agree get most of Hama and wipe out those terrorists taking part in this attack when they are in the open. If they are wiped out they won’t be attacking the SAA like this again from that area.

Do you perhaps know where the Tiger Forces are located on the map above? Are they scattered across the battle line or concentrated in one area?

I’d rather go for the big one with the tigers coming down, use Hamamiyat and Ma’an to sweep Kafr Zita, Latmin and Morek out from under them then move south until resistance is met and fortify there. It’d be a serious hit to HTS’ morale and if executed fast enough it’d trap a lot of manpower with small ammunition reserves which could be eliminated in fairly short order.

NICE! SAA could easily move north too if they do it fast enough. They would catch those territories with virtually no defense if they break the rebel defencelines penetrate inside the territory and encircle, isolating the bulk of rebel army wich are concentrated in the south. Who knows how far they could go up north inside Idlib if executed accordingly and fast in a blitzkrieg like movement, not giving time for the arrival of new reinforcements from the northern frontier with Turkey?

Hmm, going toward Idlib is an option although it would mean breaching the ceasefire, interfering in a Jihadist ‘civil’ war and opening more risky supply lines all the while maintaining an encirclement, I fear that might be too much for the SAA on such short notice.

While I would agree that the ceasefire breach is a relatively small matter given the Jihadists have already done so several times, it is worth keeping for appearances, there’s no way the western media will report that Syria is abiding by the ceasefire but the moment they break it in any major way it’ll be like a school trip to a sweets factory.

I don’t think the interior of the rebel held area is well defended. They are concentrated in the front lines. If SAA break the frontline, it could use speed using high susprise factor to take the almost no defended land behind enemy frontlines with low cost of lives. But I understand your points. About this ceasefire, it only served to resupply the enemy and give time to them to regroup to attack.

While I agree the interior of terrorist held ground isn’t well defended at this time, I would suggest this is mostly due to the infighting between groups that started as a result of the ceasefire and thus diminished threat of SAA operations rather than a lack of manpower, chances are if the SAA began an offensive against these groups they’d soon unify their defence.

One should not forget that despite heavy casualties in every large scale battle since the Russians joined the war the terrorists did manage to amass upwards of 30,000 men over the course of their Aleppo operations and while that was happening they were busy on the Hama front too so there’s no shortage of forces to call.

It is true that the ceasefire has allowed the terrorists to resupply and reorganise, however, it has also allowed the SAA to focus on other fronts although that opportunity has been largely wasted with very little attention given to finishing terrorists encircled in the heart of SAA territory.

I have noted in the past that while the SAA is quite capable on the ground when given orders, it lacks the direction needed to get the results it’s capable of. I would suggest given the swift progress made on both offensive fronts much of the SAA’s attention during the ceasefire went towards reorganising and equipping it’s own units, which is something they haven’t been able to do properly in some years.

I have noticed this strange and explainable propensity ( from a military point of view) among Arabic fighters ( both SAA and jihadist) to cluster together in large groups of 20 to 40 men ( platoon size) in the immediate vicinity of the front line and then become static; obviously that makes them excellent targets for mortar, artillery attacks which effectively wipes out the entire ( if not most ) of the group. It mush be a cultural thing, because it is certainly no sound military approach to warfare.

Sometimes I despair and tear my hair out at the tactical stupidity of SAA sub-units bunching together out in the open within even small-arms ranges and line-of-sight of very capable, trained enemy. Sorry to admit this but the brutal truth is that many enemy groups on the battlefield are better trained, armed, and motivated. NEVER EVER underestimate the enemy !

Many of best fighters have seen so much death they accept that they will not survive unless fate destiny or God decides. So many are aware of risk but gather in groups with friends anyway. Specific rules demanding no groups should be enforced.

Bullshit. They obviously weren’t expecting that attack. That wasn’t a combat zone. They are fighting, surviving and turning the tables for 6 years now. To think they are so bad as you are talking about are just plain stupidity. They are thriving in a long struggle that most armies in the whole WORLD would long have quitten, so don’t underestimate them so much.

the “buratino” is coming! have a nice trip to hell Mr. FSA!!

Anybody knows where the Tiger Forces are concentrated on the map?