The Syrian army’s Tiger Forces and the National Defense Forces (NDF), supported by the Russian Aerospace Forces, have retaken the village of Ma`zulah, the Hawarah Hill, Abu Jabbar, and Birat al-Bab from ISIS terrorists in the area southeast of al-Bab in the province of Aleppo.

The army and the NDF physically cut off the only ISIS supply line to al-Bab and de-facto closed the pocket with about 2,500 terrorists. If ISIS is not able to make a successful counter-attack soon, the fate of its forces in the area is predetermined.

Oh dear, stuck in a cauldron? They did have a chance to leave. Now there is a new President in town, cannot see anybody being in a rush to get them out.

:-))
To get them out ..HOW? They are f*cked-up. (Andwitzh themj, I guess a lot of Saudi, ISRAELI, Jordanian and CIA “advisors”…)
Only Hitler thought that he can get the Germans out of the locked trap Stalingrad with Goering’s Luftwaffe :-))

Too late.Turks are already in the town.

Turks will go home. The Russian-Turkish pipeline is more important than a bunch of CIA-punks. Erdogan gets in exchange OTHER “goodies” from Putin, to move out from there..

A place on the wealthy (REAL WEALTHY!) round-table at the Asian /China-Russia-Iran-IndiaTrade-markets) bring for Erdogan’s Clan much more than that crippled CIA-attempt to split Syria..

Beautiful , pocket after pocket, brilliant. Soon , Tel Aviv will be in a Pocket.

A Palestinian man sits amid the rubble of a house that was demolished by Israeli military bulldozers in the East Jerusalem al-Quds neighborhood of Beit Hanina on January 4, 2017 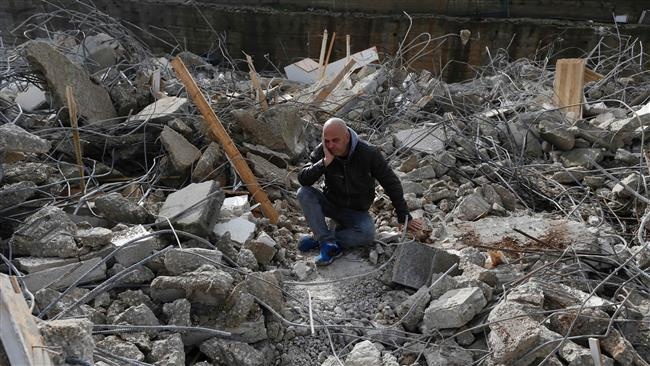 … And then THEY are surprised that “everybody loves them” …

Hahahahaha, you wish! Israel will never let that happen. And the rest of the Arab world is too incompetent to make it happen. Dream on.

“ If ISIS is not able to make a successful counter-attack soon, the fate of its forces in the area is predetermined”…Not a problem, some one will force the Syrian to implement a cease fire to give the UNITED STATES MERCENARIES TERRORISTS another opportunity to SCAPE AND REGROUP…THIS IS THE TIME TO ELIMINATE THE WHOLE GROUP FOR EVER AND DON’T HAVE TO FIGHT THEM AGAIN.