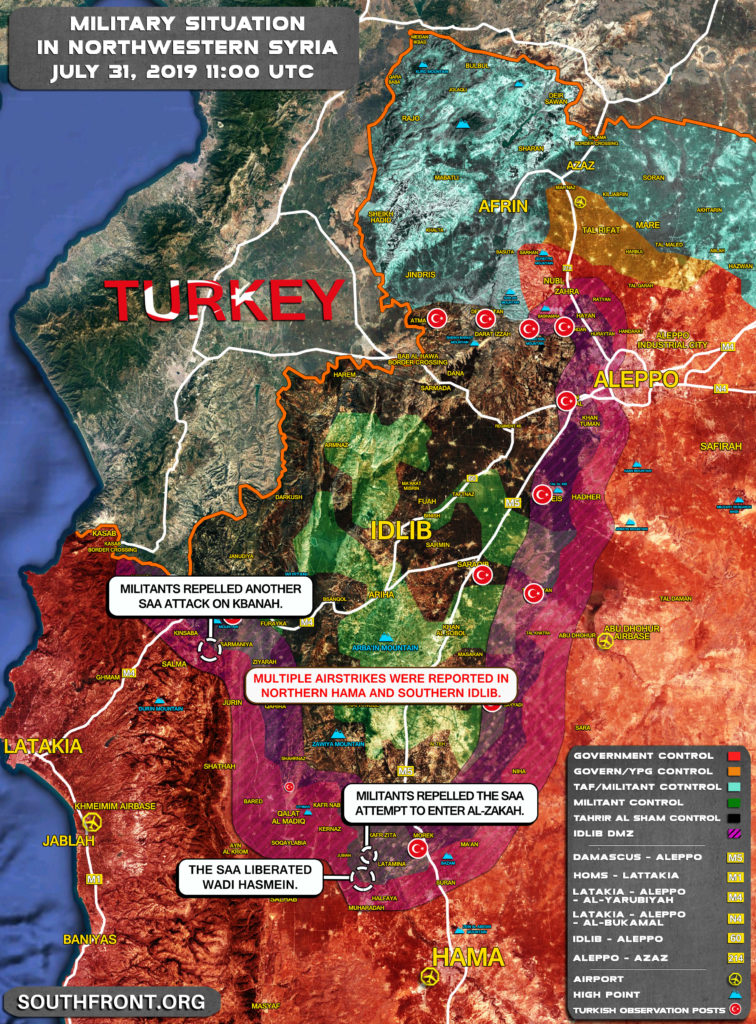 On July 31, the Syrian Arab Army (SAA) and its allies liberated the village of Wadi Hasmein in northern Hama from Hayat Tahrir al-Sham (formerly Jabhat al-Nusra) and other militant groups.

Government troops also pushed further in the northern direction aiming to capture al-Zakah, but they were not able to enter the town. Nonetheless, according to pro-government sources, SAA units seized farmlands to the south of al-Zakah. Clashes are now ongoing there. 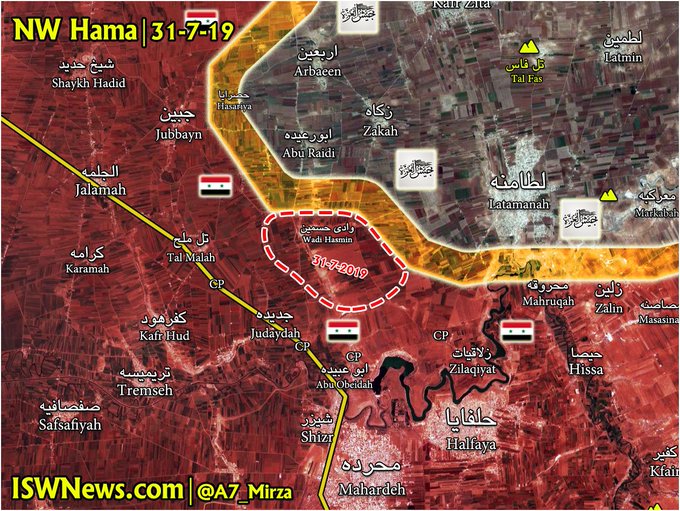 On July 30, the SAA advanced on the town of Kbanah in northern Lattakia, but this advance was repelled by Hayat Tahrir al-Sham and the Turkistan Islamic Party. Militants had repelled around 5 attempts to capture this town over the last few months.

So, most likely, the SAA will continue focusing its efforts on northern Hama where it seems to be capable of achieving more progress.

All militants should leave Hama and Idlib to SAA and prepare themselves for libration of Palestine from foreign intruders.

Find the targets. Set-up the artillery.Repeat.

i dont understand why airstrikes have to be ‘a response’ to hts bombings……it should rain hell 24/7 in idlib. you have all th terrorists in one place totally surrounded. make them pay for their atrocities. bomb them all day to the extend that they will have no place to rest for even a second. they will run like rats. Have the sky filled with UAVs that will hit opportunity targets or discover targets for the airforcee. thats the way to give them hell on earth.

They are bombing them 24/7, have you seen the pictures of the bombed out towns HTS controls, they’re not towns anymore, just piles of rubble.

to be honest i havent….!

I love the SAA’s logic, just bomb the hell out of an area for several months and destroy everything standing there, and leave the rebels absolutely nothing to take over and nowhere to hide, and nothing of any substance to occupy or hold onto, and no real reason to fight anyway. The SAA may not be taking over much territory but they’re quickly turning the demilitarized safe zone into a total wasteland, a scorched earth policy beats fighting any day, especially when it seems to be working so well.