On March 19, government forces liberated Sharimah and Juni al-Salamah from ISIS terrorists south of the terrorist-held city of Deir Hafer in the Syrian province of Aleppo. Government troops, led by the Syrian army’s Tiger Forces, advanced in the direction of Aqulah and Qusayr and engaged ISIS forward units in the outskirts of these sites.

As SF predicted on March 18, the government advance purused the goal to reach Aqulah west of Deir Hafer and to cut off the main road linking the ISIS-held city with the rest of ISIS forces in the province.

Meanwhile, clashes continued in the village of al-Aamidiyah north of Deir Hafer. Government troops entered the area earlier this week but have not been able to fully retake it from ISIS terrorists yet.

On March 18, pro-government units got control of Um Al-Murra and the Al-Murra hill, imposing a fire control over the southern part of Deir Hafer. 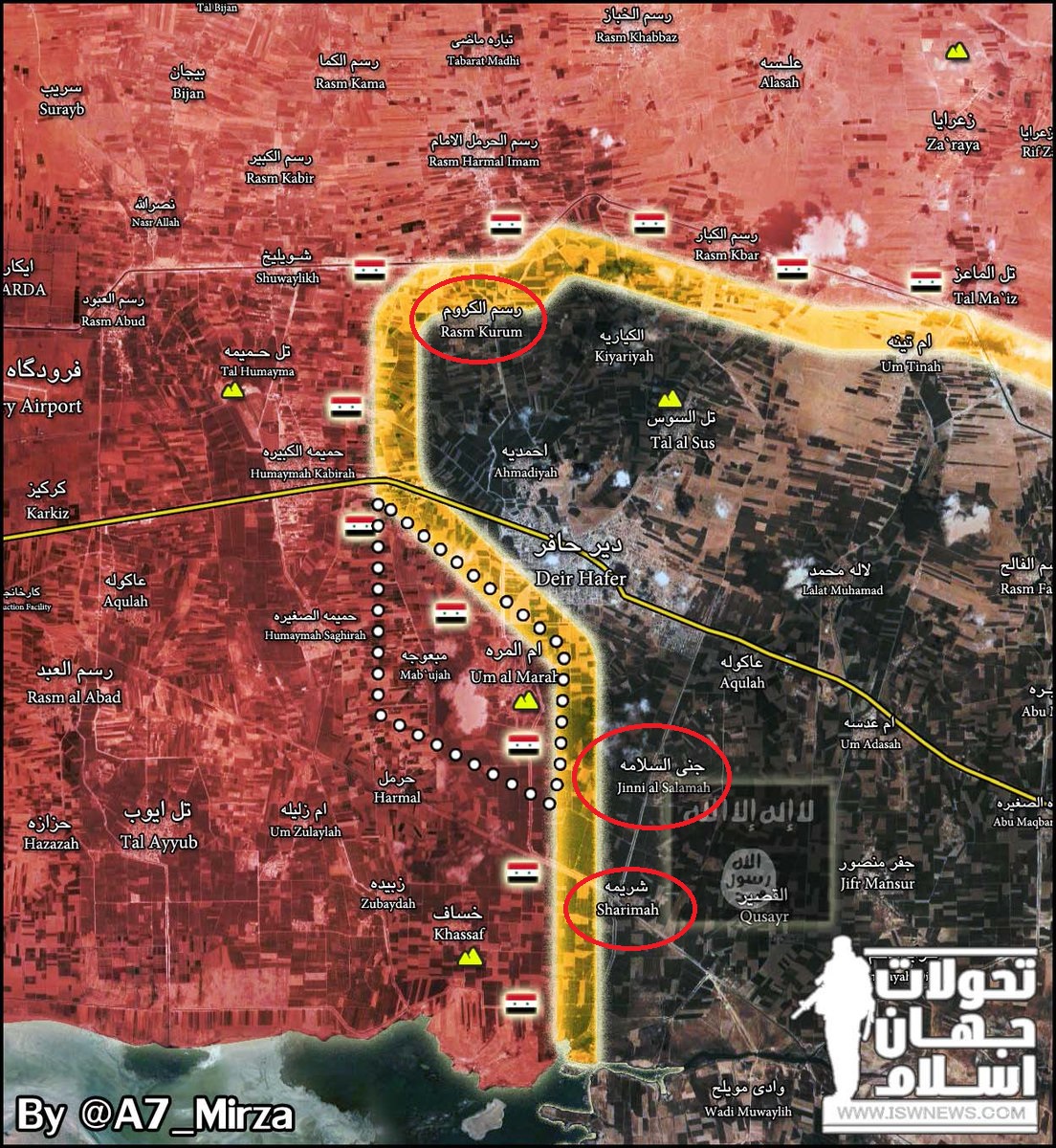 Al Qusayr is next

There are NDF reports on twiter which said that SAA reppel terrorists offensive and now are counter attacking, maybe they made some gains but i dont think that they made to Qaboun pocket, i hope so

I dont know .For Eastern Aleppo I know but for Damascus no idea.Some say the siege is broken,the other opposite.If the rebels from Jobar have made it up to Qaboun.it will make SAA job harder.I have been saying this for 3 years – capture Jobar and Qaboun pocket.This will diminish Ghouta.

whats ghouta? have heard it before

Thanks is it under government or terrorist control now?

According to Al-Masdar, while the “rebel” offensive was a surprise, and they made some progress, it’s been contained and the progress is not significant. They couldn’t link up Jobar and Qaboun, and still far from it.

WTF while the SSA is wasting their effort against some insignificant villages, Terrorist broke the line of government troops in Jobar area in Damascus this morning. Half of Damascus is in their hands now. SSA is hopeless.

These areas in Damascus are not deserts, very strong people are living there and government told them come we promised with you that we will give you best training to you to defend yourselves but they are happy under terrorists occupation.

God does not change the condition of the people until they change themselves.

Aleppo will fall – August 2016.This was after the rebel broke the siege .Hama will fall – September 2016 .And now Damascus 2017.I am tired of people like you.Go play Fifa or watch some porn.Dont discuss serious things

WOW do not tell people what to do or not to do because someone have different opinion than you. You act like some kind of expert or know it all, but this war is ongoing for too long because of that. It is fact that with some exclusions the Syrian army strategist and army staff are incompetent and incapable. The only reason that the war is going in direction different of total defeat is the intervention of Russia and defacto Russian officers commanding Syrian operations and army. So don’t act like we got it all figured out . The fact is Syrian army showed resisted to a lot in the war but lacks determination, All of it potential was lost when the brilliant Syrian commanders were conducting their war .

“Half of Damascus is in their hands now. ”

I don’t understand how thous two pockets in Damascus still survive if their are not getting supplies and arms from outside? And they got enough forces to go in offensive against the army. Where do they get munition from?

The war map doesn’t reflect the fact that the insurgency is fully entrenched within communities denoted by the “red” faction, ie, the SAA and its allies. Many of the villages and towns harbor the insurgency even while outwardly supporting the government to avoid airstrikes and imprisonment.