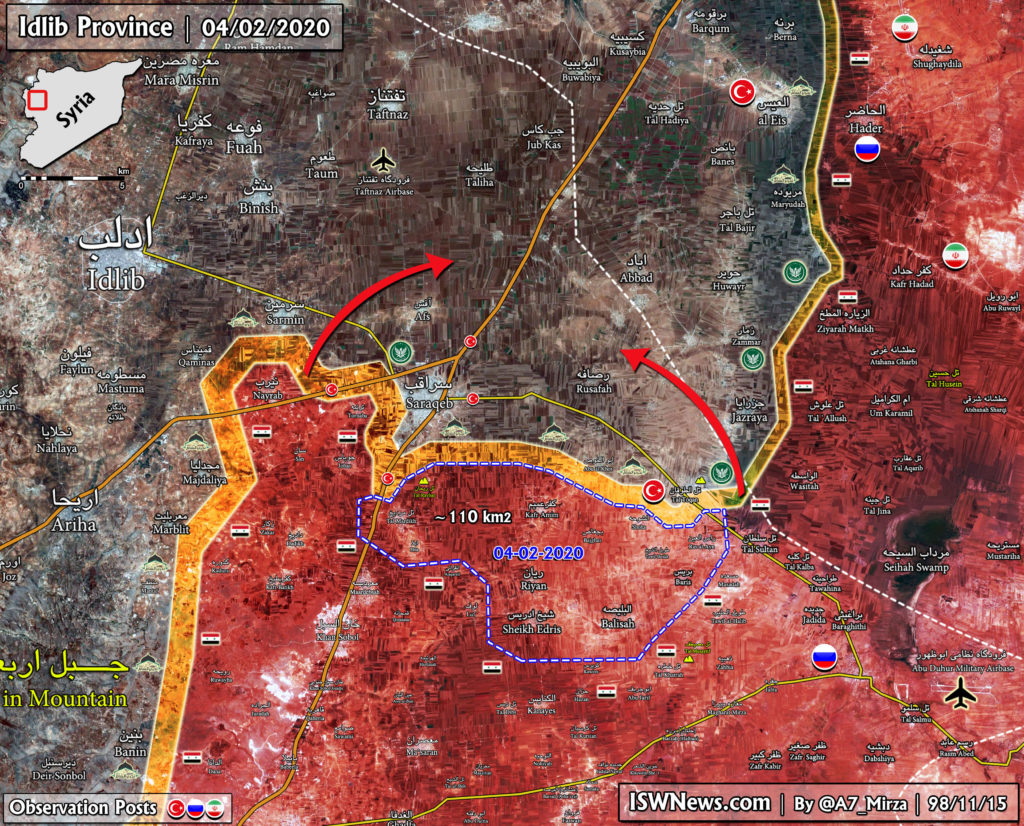 The Syrian Army and its allies have liberated 110km2 from radical militants in the Syrian province of Idlib since February 4 morning. The former militant strong points of Sheikh Edris, Balisah, Tal Mardkih, Kafr Amim are within the liberated area.

With this advance, government troops secured the entire southeastern countryside of the militant stronghold of Saraqib, which Hayat Tahrir al-Sham (formerly the Syrian branch of al-Qaeda) and other radical groups use as a key hub on the crossroad of the M4 and M5 highways.

Turkey recently deployed there several units supported by military equipment. Nonetheless, if the town is fully encircled this will not help to rescue al-Qaeda members there. According to some pro-government and pro-militnat sources, “rebels” are now fleeing from the western countryside of Saraqib.

It´s gonna get Schwifty in here!

With all these victories, my expectations of the SAA keep growing. I am trying to think how much more territory they will regain by end of February? End of March? End of summer? Keep going, SAA brothers!

If Putin does not cut any more deals with the moron Erdogan, it is curtains in Idlib and then terror fight moves to eastern Euphrates.

If Erdogan chooses war against Assad now the SAA will have from 0 to very little chances from not going back to Sochi borders, except if Putin decides to step in of course

well several Turkish news agencies exposed than a span of time was given to Syrian government to remove the besieging of their bases, I think it’s virtually impossible to un-besiege a base without going back to the borders previous to the advance. If the span of time it’s expired a military intervention would e evaluated and the Turk army it’s capable of driving the SAA back, until recently we saw fanatic/brainwashed militias armed by the Ottomans not Ottoman soldiers. If that situation becomes feasible, only a new advance from the Russian OP can stop the Turks. I hope to have explained myself clearly

you have but fanatic/brainwashed militias include turkish army. Turkish army is untested and might really suck plus the skys are locked down

Russia will not allow the Turks to retake the liberated lands in my opinion.The continual terror drone attacks on Russian bases is a massive issue for Russia and combined with the damage to SAA morale, its a non starter to withdraw to the Jump off Points of the current campaign.

Turkey is giving full support to this terriost specially in the area of alleppo. Russia airforce should strike more in west alleppo so SAA can advance and join 25th special force. rusia should not agreew ith any ceasrfire in this advance bcuz jihadist morale are down and thier defense is collapsed completly

You are 100% correct and that is the predicament for the arsehole Erdogan.

That is why he is running around like a mongoose with a cobra’s fangs stuck to his dumbarse. The Turkeys are in pretty dire straits and unless they break every agreement and commit their own cannon fodder, Idlib’s terrorist enclave is done for. He is hoping that Putin will agree to another pause “ceasefire” so that the headchoppers and rearmed and more Turkeys on mufti brought along to fan terror in Syria.

My heart is breaking for him as well. Only hope he is doing just as poorly in Libya.

Reports coming out a new attack on US forces in norther Iraq. est 7.00am London time. Just letting them know not to go to the pub and get drunk and expect to get home in one piece I guess. Good to see the SAA are still progressing. Put prssure on two cities. Do they defend one or the other or both or leave Saraqib to ts fate and try and reinforce Idlib city. Time for HTS to take a leaf oiut of the Japanese book. Suicide mass attacks worked well.. Instead of suffering for days and weeks they met a quick end .

I would rather have Russian or SAA bombs relieve the HTS terrorists of their miserable lives. Good fertilizer for the soil.

There was news circulating that terrorists who were still deep in the south such as in the mountainous areas of Arbain and Zawiyah and several other areas close to the front line wanted to violate the orders of their commanders to stay and defend the area, they wanted to run away immediately after knowing that a large number of residents in Idlib are fleeing to Turkey, most terrorists in this region do not want to lose the opportunity to save themselves with their families by fleeing to Turkey, as long as the road to retreat is still open and has not been blocked by SAA and its allies. Their intentions are blocked by a smaller number of more radical terrorists who threaten to kill them and their families if they do. True or not, we will find out in the next few days. Run rats, run now or die!

Seeing how fast the SAA offensive has picked up speed, my hunch is that the SAA realized that their opposition garrisons were low on munitions, foodstuffs and heating fuel so were in no position to put up a fight for any length of time since their masters weren’t capable of providing more supplies. Being prudent soldiers, the opposition militias withdraw to the rear to get closer to their supply base.

Maybe it could be for that reason. But this time it seems more due to the moral problems of the terrorists who are increasingly declining. Given that terrorists have lived in this area for a long time and their supply lines have not been cut off from their main storage warehouse in the north, it seems that the supply problem has not been their main obstacle, or not yet.. Their morale and fighting spirit were declining due to being repeatedly defeated and having to retreat to their second line of defense, and many cities and villages they had occupied for a long time had been recaptured by the SAA, and also because of planning, tactics and combat experience owned by SAA which has made SAA and its allies more effective.

Golden bridge; the logic of Syrian and Allied tactics is quite admirable.

It is time to liberate the Taftanaz airbase as that is the key Turkey terrorist staging area. It should be hit with long range ground missiles and artillery and then a armored attack. The terrorists should be deprived of all strategic ground before being obliterated.

According to ISWNEWS Syrian Army has just captured Tal al-Toqan in east of Idlib province.