Syrian government forces have liberated two more districts of Aleppo city – Sheikh Lutfi and Majeh – from members of Jaish al-Fatah militant coalition, according to local sources. Earlier today, the Syrian army and its allies liberated the district of al-Shair.

As SouthFront predicted, the eastern Aleppo pocket is shrinking with no chances for jihadi factions to repell the ongoing government advance. So, the full liberation of Aleppo is just the matter of time:

With liberation of areas north of the Aleppo Citadel and appearing of possibility of fall of Sheikh Saeed and nearby areas, terms and conditions of surrender agreement offered to al-Nusra and its allies by the government will be step up.

In case of total collapse of al-Nusra defenses in central in southern Aleppo, the army and its allies will likely withdraw from any ideas to make a deal with the al-Qaeda linked opposition and will purge all remaining militants in the area despite the hysteria in the mainstream media. All these developments will likely took place in coming few weeks.

Pro-militant sources call “opposition fighters” to withdraw from the areas north of the Aleppo Citadel to the southern part of the Aleppo pocket. 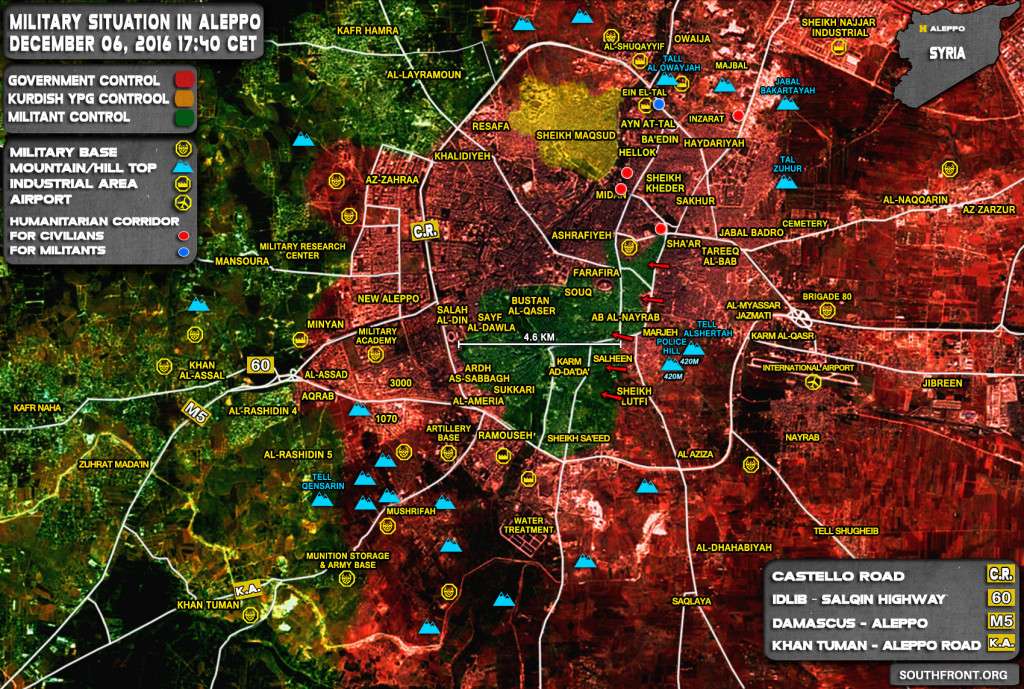 The linear scale on your map doesn’t make sense. On yesterday’s map you indicated that the distance from the citadel and the opposite front line was 800 meters. Today, your linear measurement indicates that the distance across the remaining Aleppo pocket is 14.17 kilometers. Yet, the line you draw to mark that distance is only approximately four times the 800 meter distance which you marked on yesterday’s map. Either you have made a serious miscalculation with yesterday’s or today’s linear measurement, or your entire map is very seriously inaccurate – I suspect it is the former.

Having said that, I still want to tell you that, generally speaking, your maps are absolutely excellent! I know of no other website which compares with it. Your site is the go-to website to learn, on an hourly basis what is happening (or not happening) in Syria. Keep up the good work, and season’s greetings to you and your excellent team.

Dear friend, you are totally right. There is a typo in the map. It will be improved soon. The real distance is 4.6 km.

Am I the only one longing for the old maps where you could clearly see who controlled what?

Dear friend, please, explain what is not clear for you. And probably, we will be able to use your feedback to improve our work.

The above map is a good example where some other maps were much better. All of the streets, etc., are blurry, there are finally some names, but the ability to look more closely in order to see exactly where the lines are drawn is difficult to impossible. There is just this ‘blob’ underneath the colours and names.

Always, one of the greatest disappointments is that the article will mention an area or location, and when you look to the map, it is not marked on the map with the same name or location. Usually, this means going to Wikimap in order to find out the particular location you are talking about.

You must be, it seems fine to me.

you make a good information job, on contrary to main stream media.

It will most likely be days not weeks before all of east Aleppo is retaken.

There is a report from Qassioun that rebel commanders have agreed to withdraw. How that would be accomplished, who knows, but supposedly agreed between the bigger powers, on behalf of the rebels.

Is it true? Is there agreement to withdraw and Aleppo is finally united and Syrian?