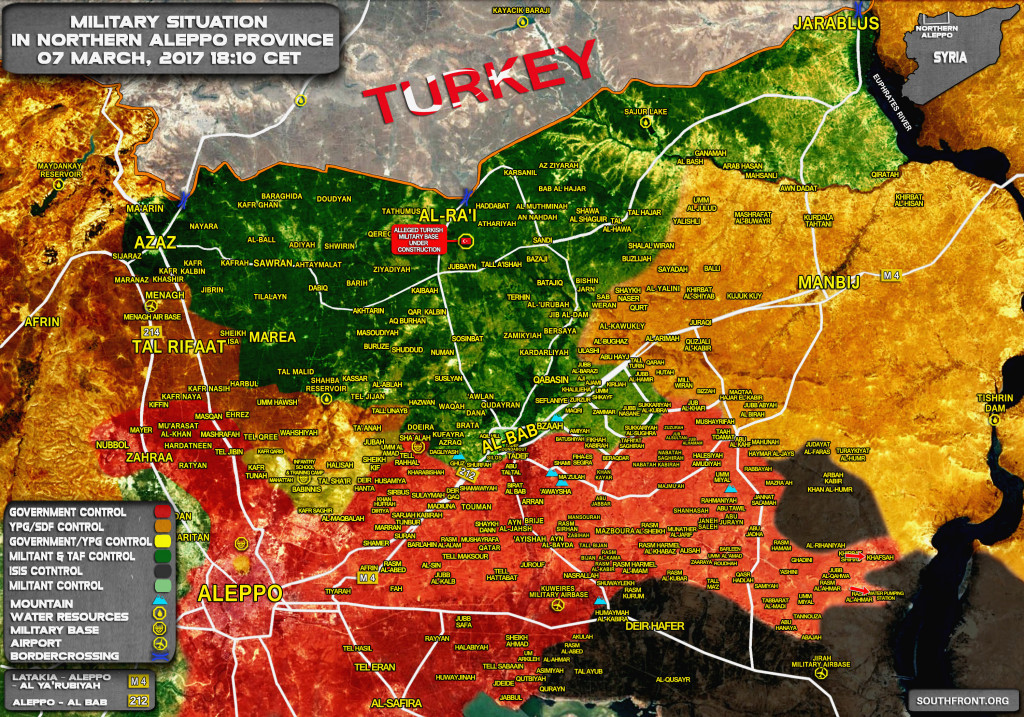 The Syrian army’s Tiger Forces and the National Defense Forces (NDF) have retaken the important town of Khafsah, the Khafsah Water Treatment Station and the nearby points from the ISIS terrorist group in the province of Aleppo, according to pro-government sources.

These important gains were announced by the NDF’s Twitter account but the videos and photos from the area were not released.

The liberation of the Khafsah Water Treatment Station will allow the Assad government to restore water supplies to the city of Aleppo which had been disrupted when ISIS terrorists damaged the station.

The control over Khafsah also means that a chunk of the ISIS-held area northwest of it will be liberated soon.

well done SAA, this is a war with countries like US UK France and stupid arabs. these is no arab spring, just bunch of thugs of Saudi qatari turkish trying to steal land. every inch should get liberated and kurdish need to be on side of Syria goverment otherwise they will lose everything too

The reality is that it will be Moscow and Washington that decides who will win and loose what. Most others (on both sides) are played like pawns. Sorry to wake you up from Your angry fantasies.

Now they are clearing the ISIS pocket

i think i remember reading somewhere that if they take jirah airbase, they will get attack helicopters that will greatly help them! very exciting times for SAA!!!

Latest map from AMN shows SAA on the lakeside at Al Sukhny. That’s one hell of a move in 24 hours! ISUS is on the run to Al Jer canal, they must be tired of being blown to hell in this open terrain! Will they have better luck at 2nd water pumping station, I hope not. Airstrikes are giving them no rest for sure. Good day! :)

You think there are helicopters locked away in that base?

Could be, who knows?

Either way, if the SAA manages to capture the Jirah airbase, they become able to bring in Russian airplanes.

Damn they are moving fast, isis must be getting very weak fighting nearly on all fronts, this year all if isis held territory will be liberated, im calling it

Even if “Daesh is on the verge of beeng thrown out of neighbouring Iraq. It might be too soon for optimism. The “Daesh” are masters in very sneaky tactics. I guess Syria needs another year to see the end of the ordeal. In the best case senario, Syria might get the situation under control, some time early next year.

I am surprised. The SAA’s tigers have retaken vast chunks of land faster than Usain Bolt running.

Back in 2011, when Bashar al-Assad sent his tanks against civilians demonstrating peacefully for their rights he infuriated me. Later, I wanted the insurgents to punish him for what he did to his own people. Then, Syria deteriorated into a full blown civil war. Outside thugs, like the Turks and Qatar, started to interfere. Bashar al-Assad may be a dictator. But, at least he’s not gone completely crazy, like the nutcase in Ankara. So, the SAA have a right to deal with the evil Takfiri invaders.