Government forces, led by the Syrian army’s Tiger Forces, have reportedly liberated the villages of Tal Ahmar, Asimiyah, Qarin, Hazazah, Tal Ayyub, Um Zulaylah from ISIS terrorists in the area southeast of the Kuweires Military Airport in the province of Aleppo.

Meanwhile, attacks in the areas of Tal al-Sus and Um al-Marah reported earlier this week have not resulted in gains by government troops despite initial claims by pro-government sources. 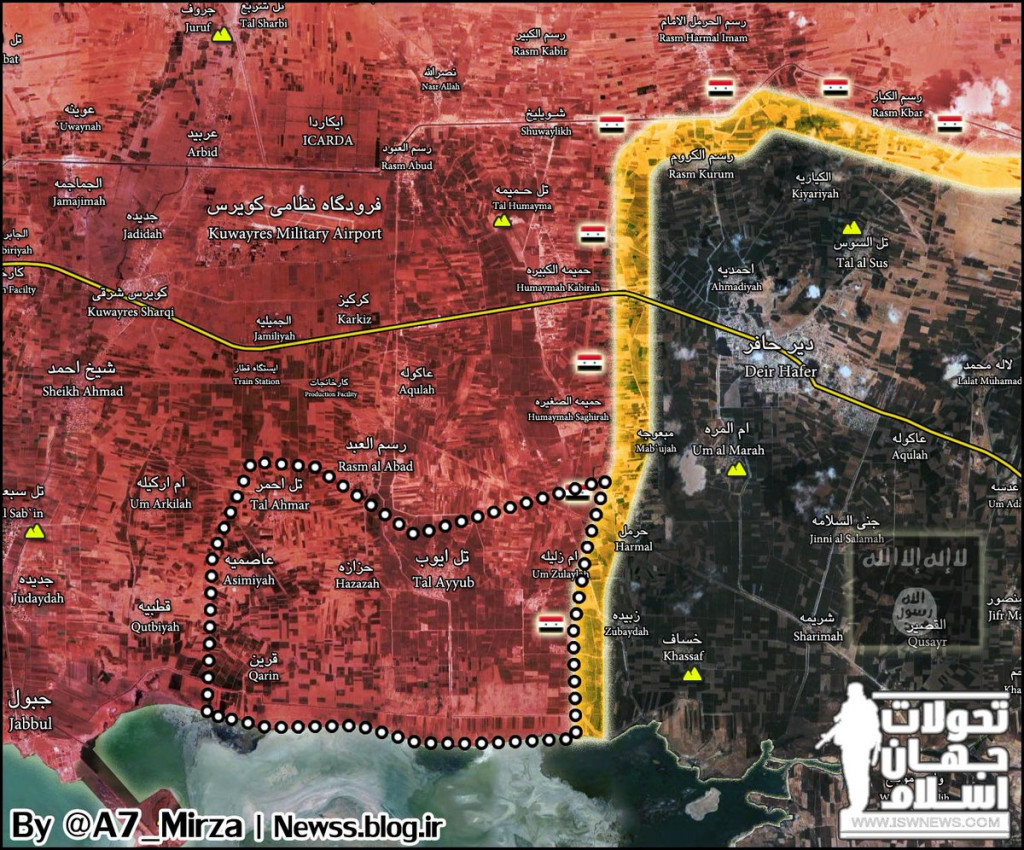 SAA should force ISIS to evacuate from Deir Haffer.No sense going into direct battle which will last for few weeks with casualties

How should they do that? Pincer strategy?

The SAA is doing just that by keeping steady pressure on ISIS from several directions. ISIS should be withdrawing units to the east past the airport before their avenues for escape gets totally cut off. I’ve been expecting to see ISIS withdraw their units from the villages near Khanasir since those appear to be rather isolated yet remain occupied. Perhaps those units are trapped in abandoned villages and are too small to cause any mischief so are being ignored by the SAA?

One thing about Daesh is that they hold onto every centimetre that they have in their control. Even if they withdraw, the suicidal type would stay behind to provide cover, only thing SAA can do is provide constant pressure and once they have reached Raqqah province, they can crush them, casualties are inevitable. They did allow for a partial withdrawal while everyone was focused on Al-bab.

and where want you destroy them?

Is only question of time. But after? Tabqa airbase-Raqqa? Or other?

It appears that the SAA is doing their best to force ISIS to commit large numbers of fighters inside Central Syria in order to retain control of the road network. The current battle for Jabal al Mazar may be using up whatever reserves ISIS had in the Palmyra area which should force ISIS to withdraw their remaining units from the nearby bases and hilltops after they lose the battle. I don’t know anything about the secondary road network in that area. The ISIS units may be able to loop around to reach Arak quickly or be forced to head north towards Tabqa to reach other roads that lead back to Arak.

Deir Hafir is ISIS delay action, or suicidal, ISIS (perhaps 400 fighters) can be trapped, Obvious they want avoid SAA get close positions near Tabqa. I was looking the hell geography (but so tempting) south of lake Jabbul (ISIS has 2 defensive lines easy to outflank, but cross the riverside to Maskaneh plain (I count 300 trenches I don´t know abandoned or not, the crossing is the problem, If SAA get that miracle all the defensive built of ISIS fall in a day (inlcludes Tabqa)

ISIS still has logistical connection? One road cut in Deir Es Zor, another by kurds in opposite riverside. Only a big detour to Arak from T4 pumping station, or any bad secondary road.

The SAA must attack from everywhere, avoiding ISIS concentration, from Palmyra towards Arak and Al Suknah, another from Ithriya, and keep pressing on Maskaneh.

The terrorists must be removed from every centimeter of the land and cities of Syria, no question about it. I am sure that with the help of Russia and Iran this will be achieved sooner or later. Turkey-USA and anexas are not needed at all.

Maybe time for a force to go from Ithrya towards Tabaqa nice and slow, might force a withdrawal of ISIS units in the Deir Hafa pocket.

Nop, you must trap the idiots like they were killed in Al Bab, another good trap is close a pocket near Uqaraybah (Homs- East). If ISIS would use logic many days ago they should abandon Deir Hafer and reinforce Maskaneh, thanks to god they are psychopats