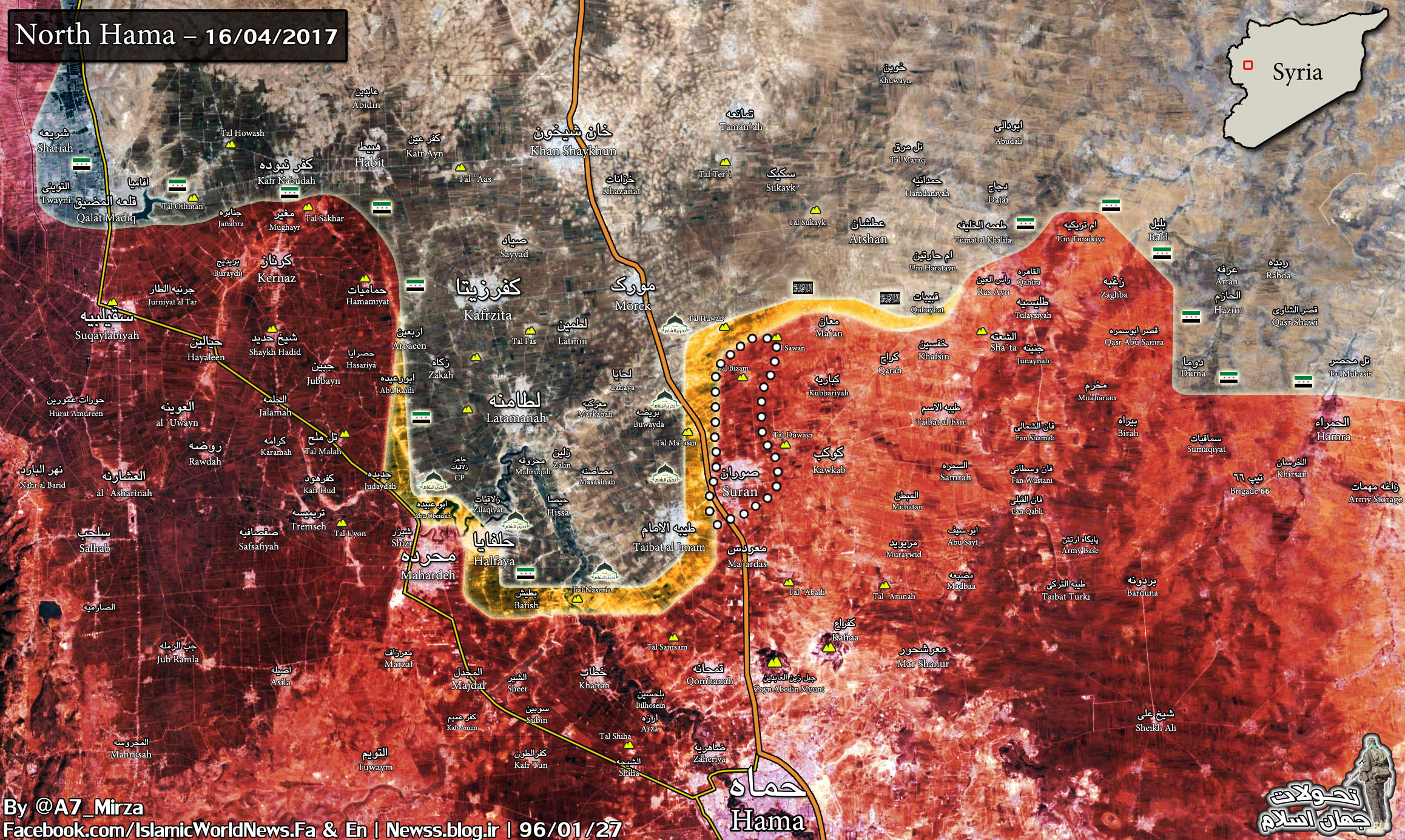 Last weekend, the Syrian Arab Army (SAA), the National Defense Forces (NDF), led by the SAA’s Tiger Forces, recaptured the strategic town of Souran and the Bizam Hill in the northern Hama countryside.

If the Syrian military command decides to continue operations in the area, it will have two options:

The Tigers do what Tigers do!

Pinch that bulge off. It’s the only way to be sure. Otherwise they’ll be at it again in a few months time.

I’m sure that’s what the SAA has planned to do and the extremists know it. If the crazies have a lick of sense then they should of started withdrawing units to the north during the night.

The second option looks much better. But in this case SAA has to be ready to repel flank attaks.

The terrorists have already exhausted their man power in this offensive. There will be no significant flank attacks and the SAA has air cover. Now is the time for all out attack to surround Taibat al-Imam and then push into Idlib stopping at the best defendable positions and then to concentrate in the south and east of Syria. Once the Idlib terrorists mount another stupid offensive, the SAA will destroy it and then the SAA can strike deep into Idlib when the terrorist manpower and resources are again exhausted. If the Israeli terrorist commanders had any brains they would have their terrorist flunkies head choppers fortify their positions are prepare for the inevitable Syrian army attack making it much more costly (like it was for Allepo) the SAA to take Idlib.

The extremist commanders should be in the process of withdrawing to the north since is quite obvious that the southern end can be quickly isolated.

YES! this would be the most effective, to cut all logistics from the deep for these terrorists! – This would even be effective for ALL cities still occupied in this bow. In the same time there should advance some others from the west. So terrorists would know when its time to leave or to die… And since terrorists seems not to be convinced of her mercenary thinking there seems the only possibility to kill them – otherwise that would never END!

Capturing morek was important for liberating souran. But even with souran already liberated, morek is still valuable target for besieging khan sheikun. The siege of khan sheikun will threaten the whole pocket with collapse. The militants will have to pull men back to defend khan sheikun at all costs.