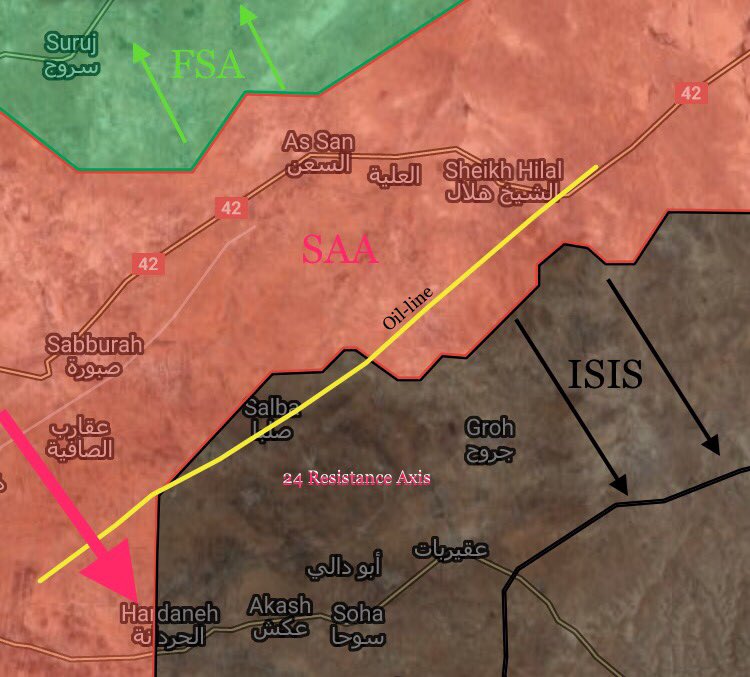 The Syrian Arab Army (SAA), the Qalamoun Shield Forces, Liwa al-Quds and the National Defense Forces (NDF) are developing a counter-attack against ISIS terrorists at the Salamiyah-Ithriyah road in the eastern Hama countryside.

Government forces retook checkpoints near as-Saan and Sheikh Hilal that had been lost to ISIS following the terrorist group’s attack in the area. The most intense clashes took place near the oil line near the village of Salba.

A fighting was also reported between government forces and Hayat Tahrir al-Sham (HTS) north of as-Saan.

According to pro-government sources, the SAA, the Qalamoun Shield Forces, Liwa al-Quds and the NDF killed a high number of ISIS and HTS members in the recent clashes. Some sources even say that up to 40 militants weere killed. 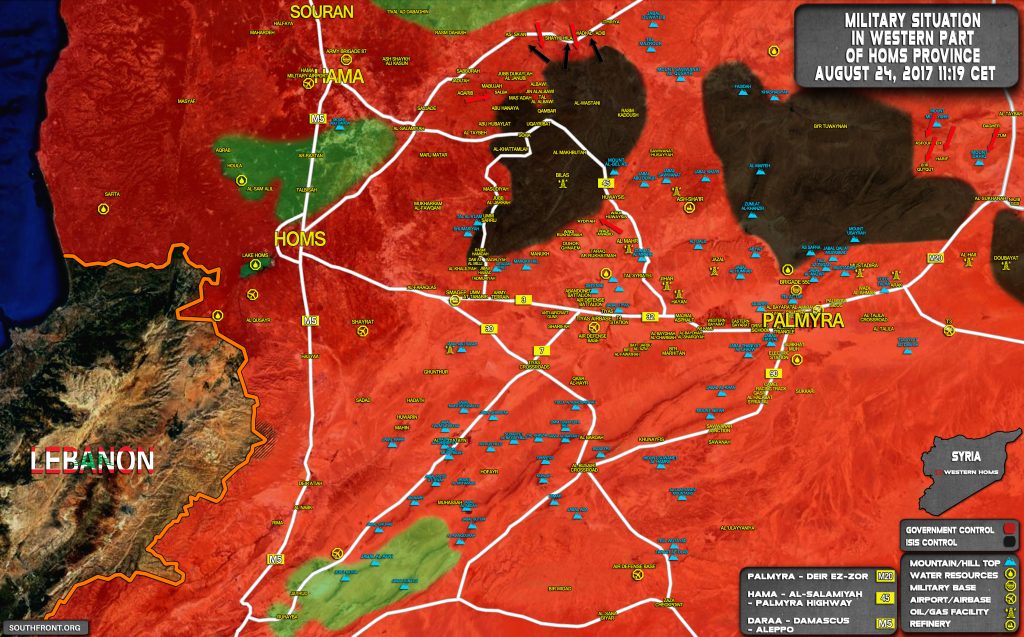 I think that SAA knew that FSA and ISIS wanted to launch a coordinate operation. That’s why they left DZ offensive to shift to central Syria.

If they know than ISIS will not able to overrun SAA defences and have surprise attack. Let’s facet it SAA has very poor intelligence gathering.

It seems that the offensive of ISIS and FSA have failed.

It will failed, as SAA have upper hand, but still this will be some set back and also this shows that SAA has poor intelligence gathering.

Lol, they are winning the war, taking back land fast, are up against rebel forces, terrorist forces, Western forces and western media and THE FUCK JOE DOE SAYS “The SAA has very poor intelligence gathering”! OK so u are the guy we should never take seriously when he speaks! Just another fuck wit commentator who THINKS HE KNOWS WHATS WHAT!

There are 680 ISIS militants in the pocket. 40 ISIS members less is good. I hope they will continue to attack :D

Everyday 40 less means that ISIS will be eventually exterminaed. No prisoners should be taken!!!

ISIS is trapped. If they attack, they will loose more and more manpower.

This is what I will do: The second packet is mostly desert, therefore I will use “Father of all the bombs” to clear the packet. This will shrink front lines and those free units should press to clear the first packet and push north towards FSA and HTS Idlib CS. Mean time SAA Tiger Force should continue East to free Deir Ezzor. On the NOTE: Assad should rearm the SAA Tier Force with better, high tech weapons such as drones, at least 4 or more snapers, anti tank weapons, there should be couple guys train and have verba manpad air defence missile, night vision high tech equipment etc.. As in my view SAA has shown the SAA Tiger force is the best what Syrian army has and capable to manage such weapons very well – “Not run and leave such weapons behind”

Waste of a perfectly good, and very expensive bomb. Totally unnecessary. The pocket will be cleared very soon.

I totally agree on that one with you. 100% my word. Now that the war is coming to an end, SAA units should be trained in the use of the verba manpad, etc. Big bombs? great idea to eradicate terrorists in their ratholes. The BMPT terminators, however, seems to be an expensive and fancy piece of equipment, almost like fightin with a golden sward… Would be interesting to know how many random attack helicopters you could buy for the price of one single of these machines.

The Terminator is being tested out by Russia since Syria has no inclination to buy it as it is a very expensive piece of equipment. The troops deployed with it are Russian where and this is being thought as for use in counter terrorism use rather than as military use but National police.

lol… a fantasy…the pocket is over 1000 square kilometres in size. Unless you can entice ISIS to all stand in a big group in the middle of the desert even a nuclear bomb would hardly dent this vast area.