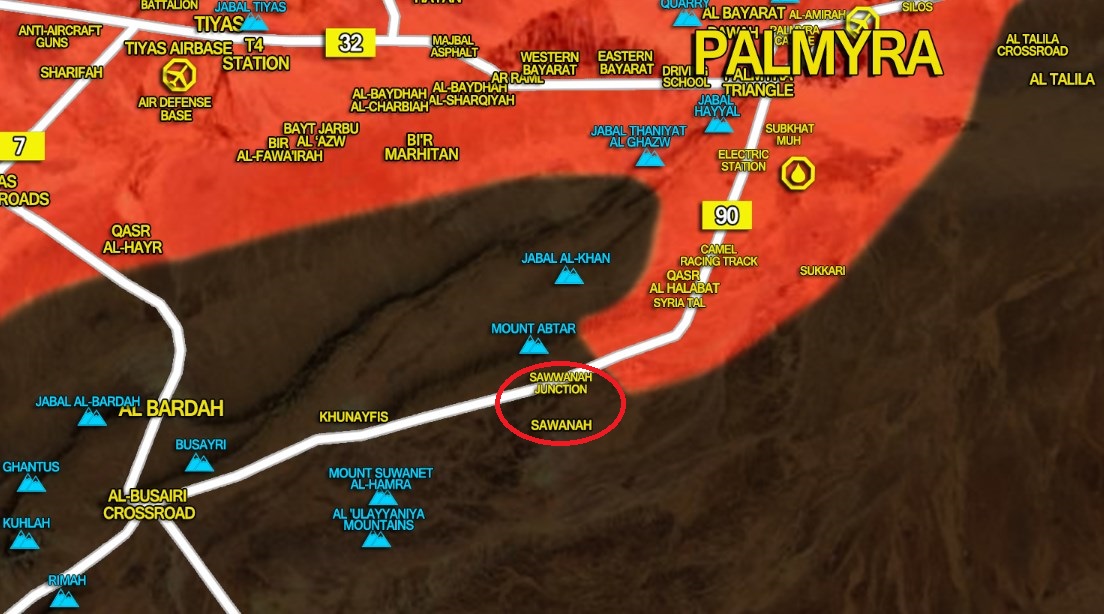 On April 19,  the Syrian Arab Army (SAA) and its allies continued attempts to advance against the ISIS terrorist group in the direction of the al-Busairi crossroad southwest of the ancient city of Palmyra in the province of Homs. An intense fighting between government troops and ISIS terrorists were reported in the areas of Sawanah and the Sawanah junction.

On April 18, government forces retook the Abu Kala Dam area from ISIS in the northwestern countryside of the ancient city.

It’s intereresting to note that the government advance northwest and southwest of Palmyra is actively supported by Syrian warplanes and helicopters. This allows to suggest that the Ash Sha’irat airbase that had been hit by US cruise missiles is almost fully operational.

The Ash Sha’irat airbase is a key Syrian Arab Air Force (SAAF) site involved in operations in the provinces of Homs and Hama. If it’s destroyed, the SAAF will lost a major part of its capabilities to provide support to government forces in these areas.

The Syrian Defense Ministry released a video of the advance in the Palmyra countryside:

Keep up the good work SAA . The English have landed near Deir Azzor , heading for al-Hamdan Airbase , can you send a couple of Iranian militias ?

Strategically it is sound tactics for the SAA to secure Palmyra and its connection to the main body of SAA held lands.

Still, SAA has to do something about relieving DeZ. If they wait too long the city could be lost in a flash. Once the lines there collapse, it is over.

If ISIS couldn’t take the city when they were at full strength then there’s no way they can today in their much weakened state.

DeZ is in my mind a siege of atrition, both parties are weakening there.

IS can reinforce, maybe even with personnel evacuated from Raqqah. SAA can only drop a bit of ammo, food and some personnel, no more. The much heralded 20 tons a day, if even that, is a drop in the ocean.

The enclave around the airport is the most vulnarable. Tactical advantage here is on the IS side.

Time will tell though.

I really hope russia does not let US make more strikes on shayrat, they need that airbase!!!

Syria has plenty of airbases close to that area of operations: Palmyra, Tiyas, Sayqal, Dumayr and Al- Naseriyah. Shayrat is due west of Palmyra with Tiyas inbetween the two.