Pro-government forces are now in control over about 60% of the southern Syrian province of Daraa, the Hezbollah media wing in Syria said on July 3 releasing maps allowing to compare the military situation before and after the start of the Syrian Army’s operation in the area.

Since late June, the Syrian Arab Army (SAA) and its allies have liberated about 1,000km2 from Hayat Tahrir al-Sham (formerly Jabhat al-Nusra, the Syrian branch of al-Qaeda) and other miltiant groups, thus establishing control of 2,350km2 of the Daraa province.

Hayat Tahrir al-Sham and its allied militant groups remain in control of 1,350km2 – 34% of the province. The ISIS-linked Khalid al-Walid Army controls 250km2 – 6% of the province. It’s interesting to note that the ISIS-held area is located near the Israeli-occupied Golan Hegihts.

Currently, negotiations are ongoing between the Damascus government and more or less moderate militant groups in the province of Daraa. Damascus suggests them a reconciliation agreement which would allow militants to settle their legal status after a surrender of their weapons. However, the situation remains complicated because of a notable Hayat Tarhir al-Sham influence in the area. 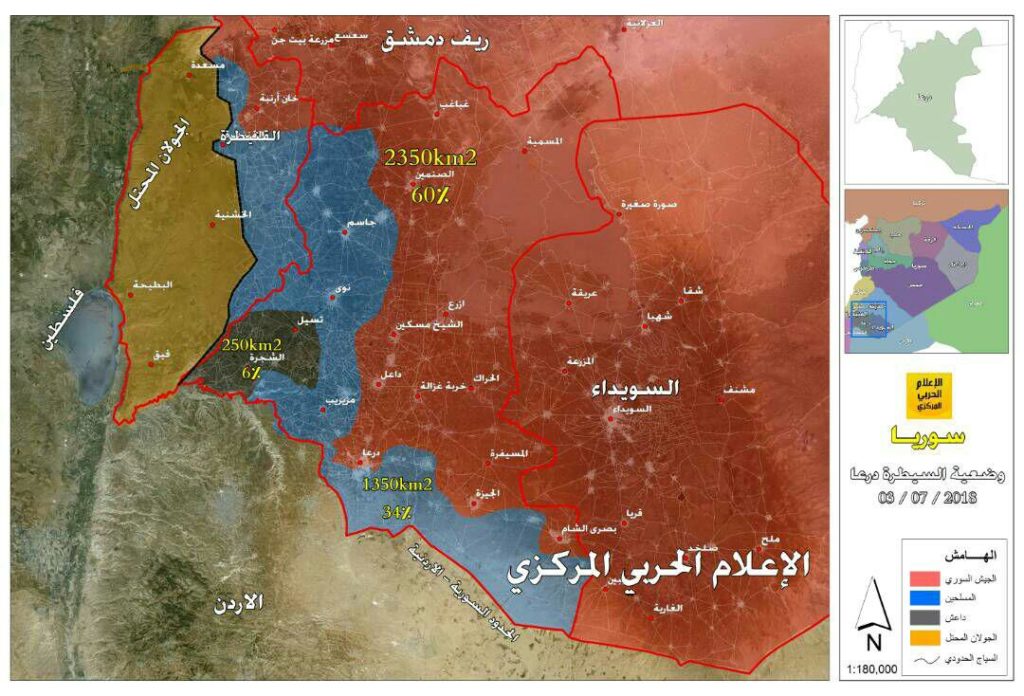 Hey Abdullah II bin Al-Hussein….your Headchoppers doing the 100-Yard Daesh towards your border at the moment…Let’s see if they can make it to the Finish-Line

You are sending Old Movies Mr. ISISRAEL… I think all Your HeadchopperBuddies in these movies are Dead by now.. haven’t you got any more recent shit?

Looks like they are Bashing Donkeys on their way to Jordan

Nobody escape death and the kaafir is the one actually dying know the difference https://i.imgur.com/mtMUPNp.jpg

We all Die some day Talmudic Takfiri Cockroach…. you Stupid Cunt…. The only Question is How & When….

Watch this description of jannah paradise by Anwar an-Awlaki cowaradly killed by the US drones may Allah be pleased with him http://www.middleeasteye.net/sites/default/files/styles/main_image_article_page/public/culture-image/Awlaki.jpg https://youtu.be/dTdZMQemGcM?t=51s

The only thing U.S. Drones are Killing are: Lots of Kids, Families, Weddings including all Guests, Civilians, Syrian-Iranian & Iraqi Soldiers…. but for sure no Headchopping Mercenaries…

And we kill them in revenge there is always new surprise https://youtu.be/hJA20zbT878?t=1m17s

Are you on drugs? It was perfect act of revenge eye for eye study history

It was a CIA Mossad Joint Venture Boy!

Great where do we meet Bitch… I’ll bring me Axe for some Brutal Medieval Chopping, Faggot…

O enemies of Islam we are not amateurs of killing not amateurs of slaughtering we are not amateurs of horror and terror justice is our religion islam is a crown over our heads benevolence or charity is our main Islamic principle those who were deceived we shall advise them those of you who lost their path (straight true Islamic path) we shall refuge and provide a shelter for them. AND THOSE WHO KILLED US YOU REAP WHAT YOU SOW and what you do shall be done over you in return.

YOU ARE THE ENEMY OF ISLAM BITCH!

You are deceived enough but no i not

YOU ARE AN ISRAELI-HEADCHOPPING-MERCENARY….SUPPORTED by NATO

Is this the same ISIL troll as before with new login? Please don’t feed the troll so much, he’s more than happy to go on and on with BS to disrupt this site. :)

Stick your cannon in his ass.

You have a very foul mouth Solomon k. Perhaps you support this ISIL troll?

what did you shot in your vein???

Yeah sorry I always try to avoid that…I started nice but he was completely filling the whole page with Nonsense-Youtube Movies… that is why I got angry.. and replied to all these movies as Soon as I started about 911 he backed off so it might be another one… but I won’t do this very often anymore… the War in Syria is almost Won… Sometimes the rage about the Whole situation Kicks in again and takes over….Have seen to much misery to let them go ahead… I know why they are here… and most of the time they only bother me on older pages… so no one has to see it…this one didn’t…

Yes dont post under my posts and we are fine nobody needs to read that and you are wrong with the explosions inside WTC how would they know which floor should go off first to not be obivious that its faked? You are faked and your conspiracy videos trying to take credit away from our heroes of our nations

Don’t pretend to be someone else Hasbara…

https://youtu.be/JQPWpY24B0Q Building 7 is a good joke too

Here the Vans of the “Dancing Israelis”

When the plane loaded with fuel hits a building at such high speed of course you will hear explosions can you think for yourself? These videos are mostly misinterpreted nonsense and if the americans are that stupid to blow their buildings like that or the israeli without being noticed then you are doomed anyway and deserve the worst

Larry Silverstein had bought the buildings a couple of months before… with a team of twenty men you can easily rig a whole building in Ten days… Vans appeared during the night to deliver Plug & Play suitcases designed for an outward blast… All security was in Israeli hands…Removing all the asbestos from the Building was too expensive Blowing them Up made Good Ol’ Larry an Even Richer Man…insurance…Perhaps you hear One Big Explosion when a plane hits a building and a couple of smaller ones.. but not a nicely timed interval BOOM…BOOM…BOOM…BOOM

And it is not even very relevant what I think…. Americans are finding out the Truth… And considering all those Wars they Fought… you must have a pretty good idea what the Sentiment will be if the Majority knows what Really happened that Day…Good Luck…you gonna need it

And what about the brave pilots? And the Mujahideen? Should you know that killing the one who opressed and attacked the muslims in self defens is considered as best form of worshipping Allah the rest is invented or faked like the video with explosion when a less louder crack sound was replaced by explosion sound effect found on internet in poor quality and clearly sounded out of place without proper echos

YOU not us do you remember who attacked us first in the last decades? in Afghanistan? Soviets and who else then? Americans and we all know what they want both our gold and our black gold Its you are the evil you are the lucifer and servants of satan who started to believe his own propaganda about fight against the evil which is inside you itself and in your bloody countries with history full of countless wars and genocides and then you come under the guise of fighting terrorism and blame it all on us, make islam look like violent religion while we only defend ourselves

Hahaha you are talking Bullshit… I always said: Middle East for The Middle Easterners…

Totally wrong. in the name of fulfilling religious prophecies you have robbed the land of palestine from its inhabitants in the name of the cross you entered Iraq with what you preceived as being a “holy mission” to force democracy down the sore throate of our iraqi brothers and sisters and when the muslims respond to this injustice and form groups such isis to fight you it is we who are terrorists and it is we who are expected to apologise constantly Muslims are excepted to condem terrorism and even when we do it is often said that our voices are not loud enough where wrere the strong and loud Christian voices in the condeming the bloodthirsty campaign against innocent Muslims? Where is the clear jewish disassociation from the war crimes commited by your fellow breathren? You kind is the worst of mankind and if God truly exists he will not overlook your blindness and will put you near the other apologists

I Look Straight Through You Hasbara-Boy….You speak with the Tongue of a Snake! You are a Cockroach and the only Truth you will know is when you meet your Evil Creator…

The Muslims should defend themselves if being attacked, spread Islam, and stand against tyrants and oppressors. Allah made jihad obligatory, in all its forms, and jihad is considered among the best forms of worship with Allah, the Most High.

You ijiot!! You sure you didn’t get lost in the John Birch Society ?? Inane screeching empty headed monkey.

BWAHAHAHAHAHAHAHA!!!!! You Folks are in a DeeEEP PILE OF SHITTT!!! You Screwed Up…. Not Funny to see it presented like This RIGHT??!! BWAHAHAHAHA…

You conspiracy morons are ignoring enormous preassure in the construction of the building you know that solids are uncompressable? The faster it falls the higher is the frequency of the explosions beause the upper floors are pushing what is in each lower floor below it outside. Imagine scenario that one of the planes will not be stolen in time or will miss the building what you say then?

Hey jihadi you are to stupid to pull off 911, that’s why your attack are relageted to pathetic lone wolf jihadi inspired running people over with vehicle. Something so simple that an angry non jihadi, regular Canadian joe blow killed 10 people in Toronto running them over. IE any idiot in car that hates the world can do it, which shows the skill and intelligence level you salafist lack.

You have made this world hell and you think you will get Jannah (Paradise). This is 21st century joke. Islam gives lessons of kind, respect and development not of destruction. God could forgive his enemies but God will never ever forgive the blood of a person own brothers and sisters.

Israel, ISIS, Al-Qaeda and SDF etc. all are US CIA shit.

Next time be honest at least! We made this world hell for those who made it hell to us there is nothing stopping us from killing and fighting those who fight undeclared war against us and now you cowards are trying to hide your crimes behind somebody else

Israel, ISIS and Al-Qaeda are US CIA invention.

This life is only prison of believer but it is the paradise of a kaafir https://youtu.be/dTdZMQemGcM?t=10m39s

My message to mankind https://i.imgur.com/IQgREg9.jpg

You guys are old news…

Best reply to an ISIS drone EVER!!!

60 % sounds pretty good to me! all the jihadists have left is south daraa city and Nawa. (and quneitra, if that’s still intact).

No it is not interesting because the implication that ISIS is allied to anyone is absurd because goes against their stated ideals and the idea that any advocate of jihad or sharia law would be caught dead making deals with Jews or any other religion is even more ridiculous. This is why I don’t donate. . As for the other part, the negotiations are not going well as many rebel diplomats made angry walkouts at the insistance that they surrender. And the heavy bombardments have produced one of the most rapid mass displacements of the war, with most civilians wandering from improvised shelters and basement looking for somewhere safe from the fighting.

Please shut your mouth you are a moron.

You do not donate because you are a cheap bastard. :D

You are nothing but a jihadi supporting zionist shitstain. So please get the fuck out of this site if you don’t like the fact that people are fed up with zionist, western and wahhabi ass hole interfering ion their lives. I guess for a cowardly psychopath that concept doesn’t compute, you sub-human rat.

The SAA will discover more of these militants are Isis linked, they were just keeping a low profile.

Bravo, SAA…. Send those Israeli/American mercenary/operative rats, aka “rebels and ISIS” scurrying like the filthy animals they truly are!

The government is Isis herself.