According to pro-government sources, the Syrian Arab Army (SAA) continued its advance alongthe Ithriyah-Resafa road. Now, the SAA led by the Tiger Forces has to liberate about 20 km of the road.

“Hama-Raqqa highway will soon be opened”

According to pro-government sources, the SAA have advanced on Bir Abu Alaj south of Khirbat Zidan at the Ithriyah-Resafa road.

ISIS claimed that its fighters managed to repel a SAA attack on their positions in Drehem east of Khanaser town. During the clashes, ISIS allegedly managed to kill two Syrian soldiers and capture their arms. ISIS fighters also managed to destroy a SAA tank at Bir Najib in the southern Tabqah countryside with an ATGM.

The SAA aims to open a direct supply route from Ithriyah to Resafa in order to support its operation in the southern Raqqa countryside, as well as expand control over the rest of the eastern Aleppo countryside. With the end of the ISIS presence in the eastern Hama countryside and the eastern Aleppo countryside, the SAA will be able to focus on its operation towards Al-Sukhna and to lift the ISIS siege from Deir Ezzor.

So they are in direct conflict and fighting SDF? Correct me if I’m wrong but that road seems to be the direction of SDF. SAA aggression is reality and they are pushing for more and more escalation.

Wrong. The SAA and the SDF are not currently at war. However, tensions have grown. They still have collaborations in both Hasake, Qamishli and Manbij. They’ve opened several roads allowing free trade in held areas by both soldiers. The SAA is not seeking to liberate SAA held areas nor have they attempted to do so. The advances that are being made are solely to support future operations against Deir Ezzor and to expand buffer zones to prevent ISIS assaults.

They are entering Efrin with the turks tho. Which means they are technically at war

No source is required. This is constant dis information.
He pretends to be naive so others do not know his game.

Lool.. why would I lie mann.. All the kurdish websites are screaming right now that SAA and Turkish forces are moving on Efrin

You would lie because that is what disinfo trolls do….. now kindly do us the courtesy of just fucking off. 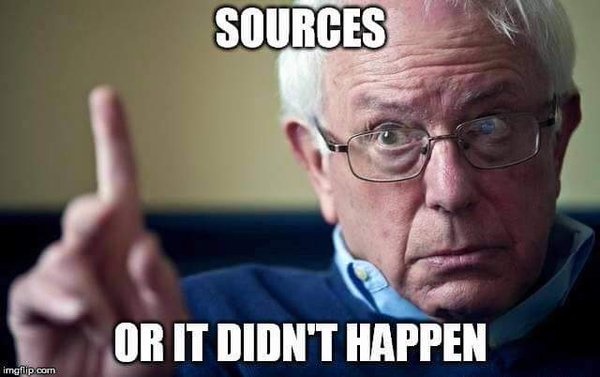 So they alledgedly closed the Aleppo road?
So this is somehow now an invasion by the SAA?
Russia has border and conflict observers in Afrin have they been withdrawn?
Is the SAA and Russians still occupieing the buffer zone between Turkish Shield area and Manbij or have they been withdrawn?
This article is largely panic by the Kurds, im sure their fears of Turkey are justified and yes the TURKS do seem to be building up artillery in the area but there is no evidence of SAA invasion what so ever. 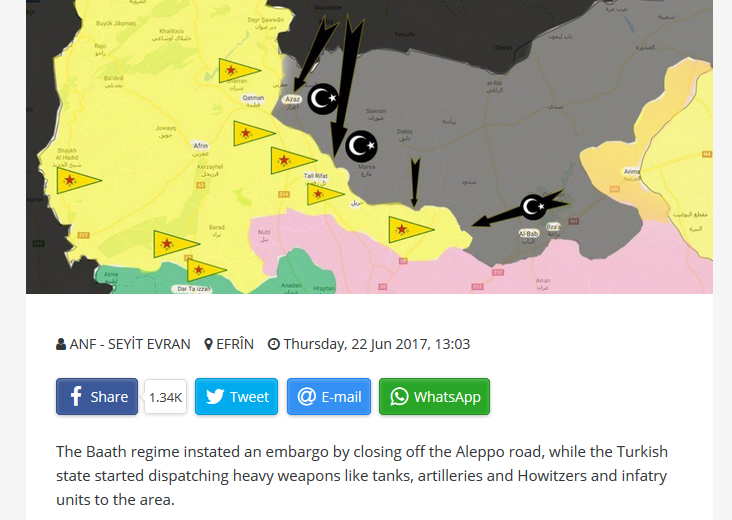 Your being deluded. Kurdish leaders and officials are sounding out this and pretty screaming this right now and your asking for source WTF is wrong with you mann.

I gotta go get some smoke and you better come down to your sense when I return. I don’t wanna repeat myself bro. chill

This is pure BS. Russia has checkpoints around the Efrin province and there is no news there about FSA trash making headway or attacking.
SAA and SDF are at peace and this does piss you off, even after the cowardly US attack on the SU 22.
YOU ARE US COALITION DIS INFO 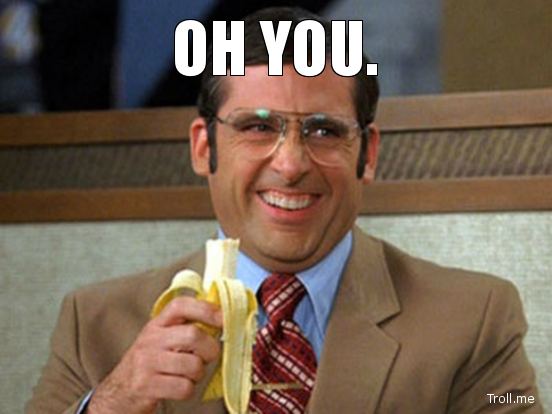 Wow, Kurdish leaders AND officials? Count me impressed. Especially if they are screaming; then it must be true.

Let them panic a bit. “Gee, our own actions are having exactly the consequence which everyone predicted; how did that happen?” They apparently thought that being the American poodle of the week would make them untouchable like their kosher partners. Nope guys, poodles of the week are the most expendable factions of all.

Notice that the author of this piece Seyit Evran threatens the Russians in Afrin with expulsion. The Kurds are really panicking , the US poodle they turned to be.

You seem to have incorrect information , in Efrin there are Russian and SAA trying to protect the Kurdish there , and have been since Aleppo was liberated from the jihadists .

I have no reason to deliver incorrect infos. The Kurdish leaders themselves are saying this that they are double crossed and turk have brought very large forces to make incursions and saying Assad signed the deal from the horses own mouth.

Other reports coming in right now saying that SDF and SAA are going at it in Manbij right now. fiecer clashes. They absolutely don’t like each other and this is not a secret to anybody

the kurdish leaders must understand, they can take the raisins and cream from cakes. if tehy want the support ogf government, they also must support the government. if they try to block government ouside of kurdish territory, they are simply agressors. and if they took the help of usa, destroyer of syria, they signed the own sentence

Its this bit of road if your actually serious and not attempting a shit tier troll. 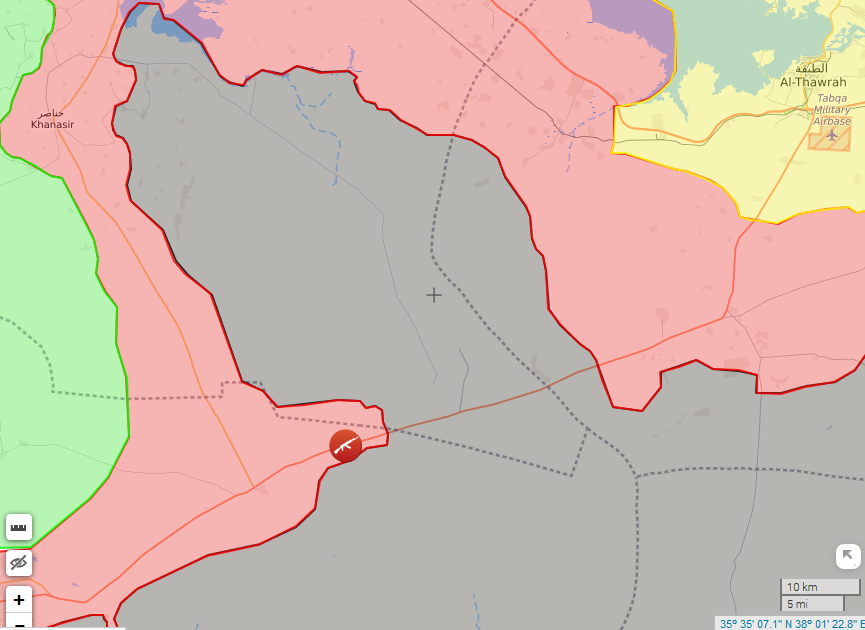 The SAA is scared to death of the SDF!

Mr Bill
ONLY IN YOUR DREAMS :DDDDDDDD 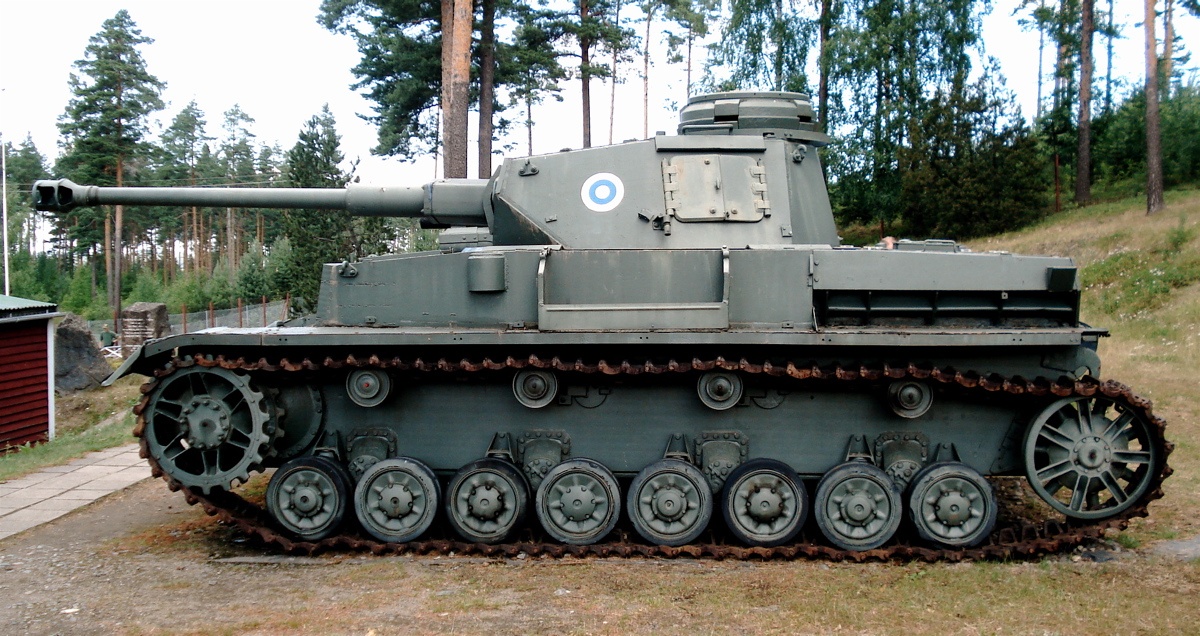 Im not so sure, yeah the SAA has its hands full at the moment but the region is full of people that are chomping at the bit to have a go at the Kurds all they need is a nod and a wink from Assad and they are done for.

LMAO. I swear there is alot of truth to this statement

Company of Heroes you wanna play? I can invite you. It’s in PC computer which is much better graphic imo

Really? Why? Why the fuck should the SAA be “scared” of Muricas little Kurdish whores?

SAA aggression?????? Are you fucking joking? This is a WAR and you are complaining the government forces are “aggressive”??? Would you prefer they simply invited the IS terrorists to tea and scones, and attempted to explain the error of their Wahhabi ways????

Its their fucking country!

“they got so much bombardment by the US airforce”
Do care to ask the many dead civilians in Mosul and Raqqa ?
This is a pix of the US lion preying on the innocent civs in the middle east: 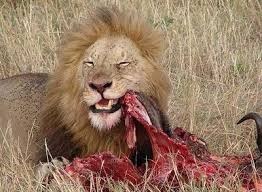 in syria the saa is the only one legitim army.

I wish they had done this earlier when ISIS were still in Maksana, would have likely caused a mass withdrawal and quicker advance asside from a few suicide units left behind.

I also wish they would put some gridmesh or standoff plates or something around those T-55 turrets to make them more resilient, few hours with a welder may well save a few lives.

Nice pix, a good defense against HEAT type ammo.
Appears that the 1st priority was to secure route 42 to Resafa in case SDF wanted to move south (mission accomplished). Now to secure the road to Ithriya and to clean the resulting pocket of any Daesh trash left behind.
This should not take long.
FLAG SPAM !

Yes hopefully not to long, yes I know the cage armour might not be totally effective against Kornets or TOWs but its another level of risk mitigation for little cost and effort, a real shame to see bare T-55s getting blown to hell with burning crews.
General strategic picture looks good so far though hence the increasing provokations from the Americans, hopefully further escalation can be avoided and the strategic gains by Syrian forces continues on unabated.

i though, the russian jamming sytem is perfect, there were several articles in this way.

How so?
They would have been where they are now 3 months ago and by now have all the Western bank of the Euphrates and be in Deir Ezzor from the North.

The SAA had to cut off Raqqa from the south ASAP so all the ISIS (6k to 10k) lSIS fighers there could not be sent to Der Azur and Palmeria. Also the SAA had to link up with Iraq to stop the USSA Israeli terrorist invasion from the south of Syria at Al Tanif.

Unfortunately the slat armor is ineffective against TOW or Korneth guided thermobaric missiles which strike above the tank creating pressure and heat. It is effective against old RPG for example.
https://en.wikipedia.org/wiki/Slat_armor

Thermobaric ATGMs are not intended for use against tanks, nor top attack. Top attack TOW use explosively formed penetrator.
You don’t need top attack to defeat slat armor if there is not very thick armor beneath.

ISIS is not to be underestimated, but on the other hand it’s always the same trick. Why aren’t these advances being scouted ahead with drones and helicopters? If you can’t sniff out ATGM positions in open desert then you can’t do it anywhere. Would surely cost less than losing these tanks with their crews again and again.

Yes they’re fighting hard with shabby resources and I’m not in their shoes etc, but is there even an SAA officer corps which is being trained/selected for the type of warfare they face?

SDF and SAA are clashing. They are going at it right now in Manbij. nothing really new. The reports are coming in right now. fiercer clashes in Manbij between SAA and SDF

It’s being reported by someone on the ground in Manjib

and such single 1 report you take as fact???

i think, thi si 0,5% probably. remeber, saa saves manbij beofre turs, and ypg saves aleppo city from north from turks. so, very dougtful are your posts. the government could lose too much, if would come to this situation.

This reporter never posts BS. his relieable. I honestly don’t see the big deal here. They don’t like each other anyways. Anyone who knows the region knows this for a fact. This hardly comes as a surprise. they have been at it for many times in the past few yea in thia civil war This is nothing new at all. They go at it on and off.

They can’t wait to go at it themselves personally due to forces crossing each other so close that didn’t like each other on before hand. It is what it is

maximum some litle clashes, whch regularly happens in quamishli and haskah. learn to differentiete the things.

at least you remember quamishli were the NDF and kurdish police clashed. This place is still called syria not kurdistan.

His fake news of SAA and SDF clashing are non stop on this site.
Perhaps he has a PO Box in Langley,Virginia?

you should not sink in evel who is which agent, whom payed. be sure, Sf is far not so important, that here will come payed agents.

Not paid. Maybe more of an internship program ? :D

ISIS is now down to fighting as random skirmish in the desert. They won’t survive long there.

Send in the choppers.

Remember that has the logistic economical and military support from USA-Israel. These terrorists groups do not be underestimated (as Ma_Laoshi pointed out).

Leave a small breach on road.

When they retreat, carpet bomb. 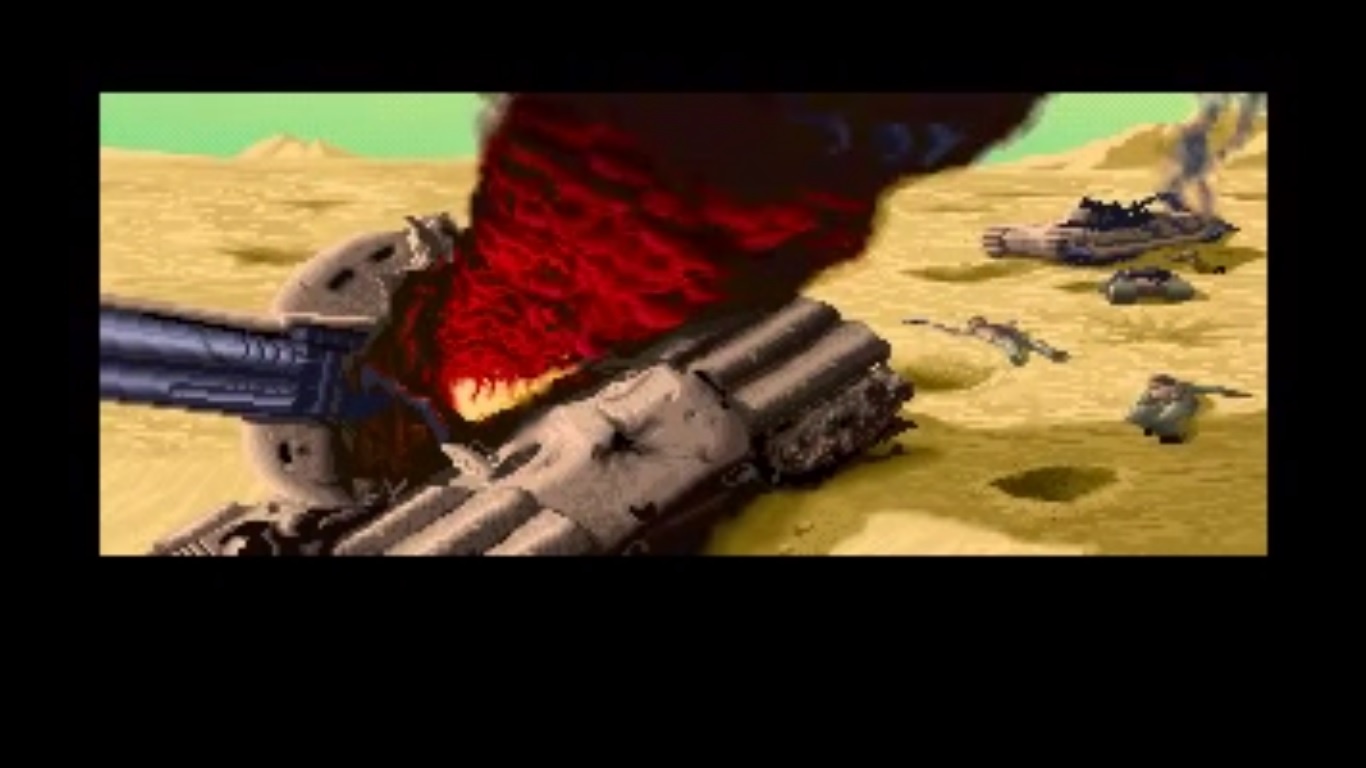