Syrian government forces have been developing an advance against ISIS terrorists along the  Salamiyah-Palmyra highway in the province of Homs.

Earlier this week, government troops captured the Abu Duhur Mountain west of the ash-Shair field. The advance was confirmed by the Syrian Defense Ministry.

According to pro-government sources, the Syrian Arab Army (SAA) and its allies are now aiming to capture the al-Mahr and ash-Shair areas.

However, it is not clear how much government troops are really deployed for this task. So, all will depend on the ISIS ability to use their reinforcements in the area. 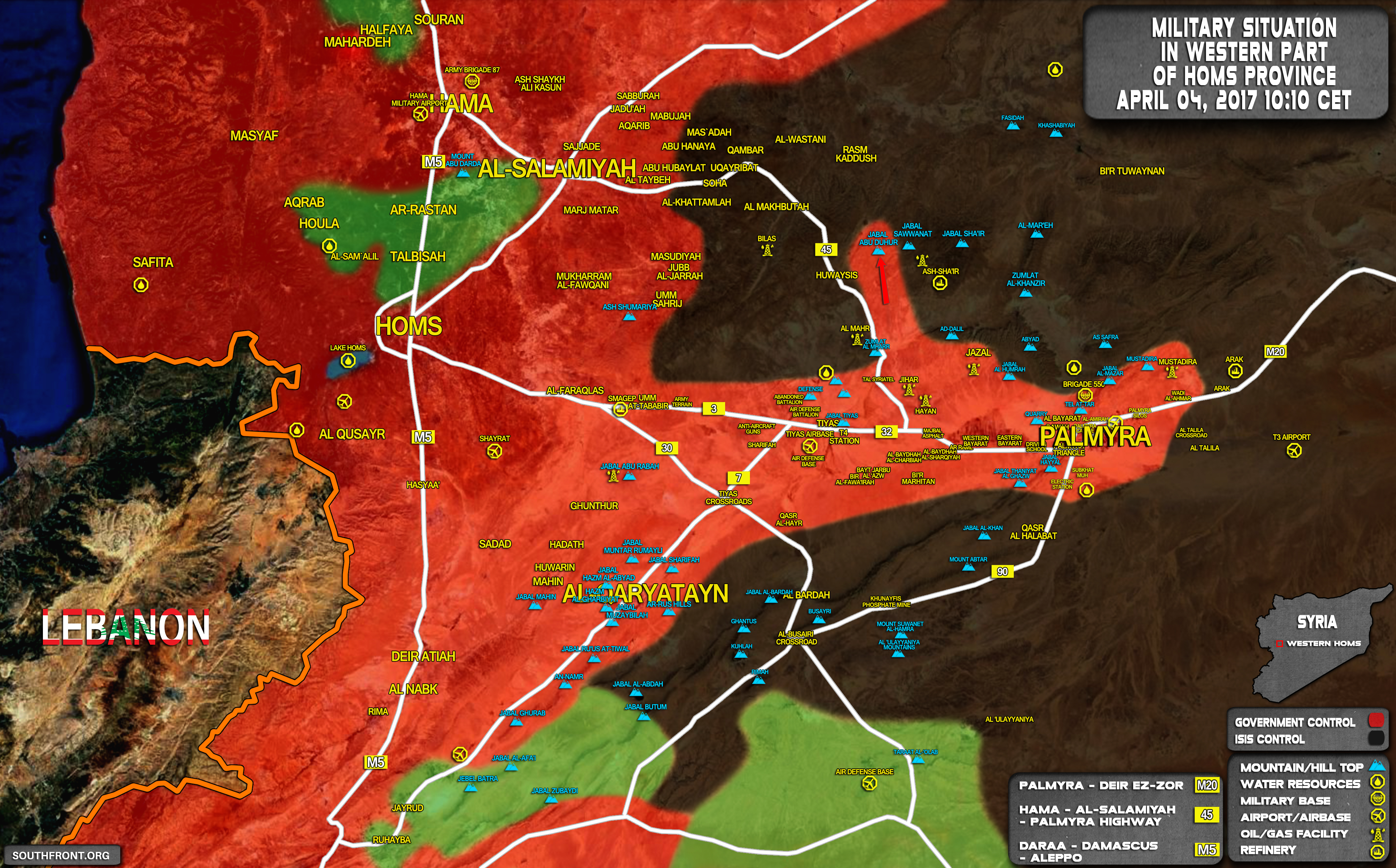 Push on to Al Salamiyah and not only will the SAA defensive lines be significantly shorted and secured, they would also get the Al Mahr and Bilas oil and gas fields.

Great! Such an advance! Like a knife through butter. I thought it would be more difficult.

what happened to that offensive to take abu hanaya and uqayrbat? just fizzled off? not enough soldiers i guess

Thank you SF, no other map providers reflect this advance.

This operation was really necessary. To cut of this salient of territory will shorten the front and improve the situation at Tiyas airbase. It also improves the logistics once the Salamiyah-highway opens again. Some generals are doing their homework.

This advance should force ISIS to abandon their positions to the west of the highway and withdraw to the north before the SAA has full control of the highway. That’s a mountainous region inside a desert which has a few decent roads from oil & gas exploration tho there’s more along the western flank going N-S. I imagine that ISIS used their fighters from the western region to defend the oil and gas fields so probably don’t have many left to pull out. Right now it appears that the SAA skirted around Huwaysis to avoid a major clash with ISIS and force it’s defenders to withdraw before the highway is blocked to the north. Huwaysis should be the supply depot for the ISIS units to the east on the mountain tops and holding Al-Shaer gas field. Now that’s been cut off then they’ll be relying on supplies from Arak and Al-Sukhnah. The Syrian and Russian air forces could make those supply routes useless by bombing a few key bridges over wadis and possibly wind up trapping those ISIS fellahs who rely on regular deliveries of food and water to survive. We may soon see the SAA start advancing east from Al-Jarrah to block the N-S roads and force ISIS to haul ass out of that salient. They have no good reason to stay there since they can’t sell the local oil and gas to Assad anymore nor are any crops grown in that arid wasteland.