Update (1600ET): Wisconsin Governor Tony Evers declared a state of emergency on Tuesday, after the second wave of violent protests that rocked the city of Kenosha and the capital of Madison, after a video of police officers shooting an African American man named Jacob Black went viral on social media.

The order proclaims a state of emergency in Wisconsin, directs state agencies to continue assisting the state response, and calls to state active duty additional elements of the Wisconsin National Guard to support first responders and protect critical infrastructure and cultural institutions.

Evers first called in the national guard to respond to the looting and violence on Monday, and he delivered a statement on the situation earlier today.

In order to try to signal to the public that he’s ‘doing something’, Evers earlier called for a special session for the state legislature to consider police-reform bills that will hobble law enforcement in the face of riots and unrest, and as small business owners are forced to watch in disbelief as their livelihoods are destroyed, with no authorities there to stop it.

Meanwhile, a petition demanding Evers “charge the cops who killed Black” has garnered half a million signatures.

Shows how much Americans know about their own legal system.

"We did it. We ended racism" https://t.co/XMzddj3PCv

The morning after in #Kenosha pic.twitter.com/lGb8VslmVs

Anarchy broke out on the streets of Kenosha, Wisconsin Monday as protesters squared off with National Guardsman in the second night of unrest over the shooting of a reportedly unarmed black man by police on Sunday.

The night was documented by journalist Brendan Gutenschwager (@BGOnTheScene – whose car was broken into and laptop stolen last night) with photos via the Daily Mail (EPA).

Rioters are SMASHING through the streets right now. This is insane. #KenoshaRiots #Kenosha #KenoshaUprising

Tear gas was deployed in an attempt to clear protesters who had gathered in front of the Kenosha County courthouse, while Gov. Tony Evers deployed 125 members of the National Guard to assist local law enforcement.

Massive fires were set throughout the city, including car dealerships, a Department of Corrections administrative building, and an office furniture company.

The Department of Corrections building in Kenosha is completely ablaze. pic.twitter.com/ugC6hBtSMz

SWAT teams and tactical units arrive to try to get the situation under control #KenoshaRiots #Kenosha #Kenoshapolice pic.twitter.com/HmhbVbr37m

In a now-viral video, 29-year-old Jacob Blake was shot seven times in the back while attempting to enter his car during an altercation with police. He is currently in serious condition in a Milwaukee hospital, according to the Daily Mail – which notes that in Blake was charged with resisting arrest and carrying a concealed weapon in 2015 after he pulled a gun at a local bar in Racine.

Meanwhile, details have emerged about Blake’s criminal past, including a recent arrest for sexual assault.

In addition to the fire and destruction, mass looting ensued – including a Mattress store which was then burned to the ground.

Mattresses looted from this store minutes before the building was burned to the ground #KenoshaRiots #Kenosha #KenoshaProtests pic.twitter.com/OD4gJhrQdo

Meanwhile, armed private citizens stood guard outside a local gas station to protect it from looters.

Private citizens stand guard with guns outside this gas station to protect it from looting #Kenosha #KenoshaRiots #KenoshaUprising pic.twitter.com/ASOnpTk638

On Monday, tensions flared after a Monday press conference with Mayor John Antarmian was moved from a park to inside the city’s public safety building, according to Fox News, which notes that “Hundreds of protesters rushed to the building and a door was snapped off its hinges before police in riot gear pepper-sprayed the crowd, which included a photographer from The Associated Press.”

Evers and a number of other Democrats condemned the shooting. Democratic presidential nominee Joe Biden called for “an immediate, full and transparent investigation” and said the officers “must be held accountable.”

“This morning, the nation wakes up yet again with grief and outrage that yet another Black American is a victim of excessive force,” he said, just over two months before Election Day in a country already roiled by the recent deaths of George Floyd in Minneapolis, Rayshard Brooks in Atlanta and Breonna Taylor in Louisville, Kentucky. “Those shots pierce the soul of our nation.”

Republicans and the police union accused the politicians of rushing to judgment, reflecting the deep partisan divide in Wisconsin, a key presidential battleground state. Wisconsin GOP members also decried the violent protests, echoing the law-and-order theme that President Trump has projected during his campaign. –Fox News

Biden and Trump are working hand in hand to make the US a partisan stirring pot while the terrorist Ziocorporate regime goes on with its globalist schemes and new world order shit.

Most Americunts are complicit due to their ignorance, indifference and partisan stupidity and deserve every bit of it.

These killer cops and the judicial system that allows them to go unpunished are a problem. The suspect who was shot could have been tased. The shooting was unjustifiable. A civilian who did something similar would go to jail for a long time.

It’s going to be open season on the rioters and domestic terrorists destroying people’s businesses and going into neighborhoods where they’re unwelcome.

This video can be watched by clicking on the lnk below the screenshot. 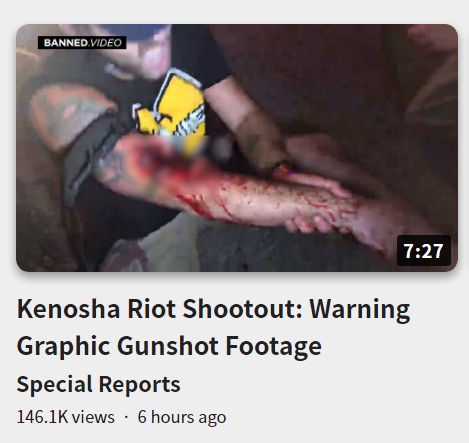 Evers is a criminial, his executive orders are null & void since he used them for a non emergecy.
Covi-19
The legislature Passes law not the governor.

Of course everybody seems to talk about the violence and South Front tows the line too by bringing up the victim’s criminal past. Come on, should we dig up your own criminal past and shoot you 7 times in the back for it? There is nothing that can justify what happened and happens nearly everyday in the US between police and African American men. This is pure racism straight and simple. White people call police on African Americans on the most trivial of issues and guess what happens when the cops arrive – one less black man in America.

This video can be watched by clicking on the screenshot below the video. 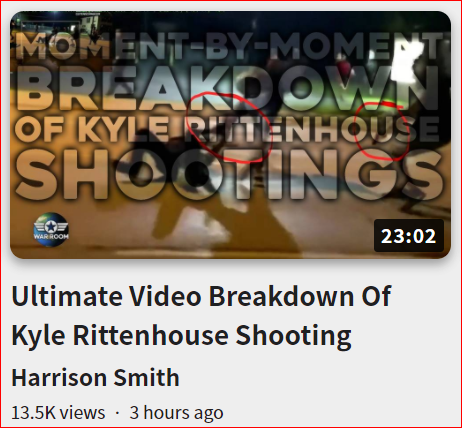 The shooter who was charged with murder. Was attacked by all three people that he shot. One tried to kick him in the head while he was down. One hit him in the head with the edge of a skateboard, and one pulled a pistol on him. The evidence is prima facia that the shooter was defending himself in a life threatening situation.