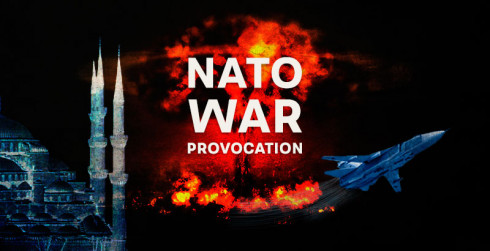 Regional alliances should, for the most part, remain regional.  Areas of the globe can count on a number of such bodies and associations with varying degrees of heft: the Organization of American States; the Organisation of African Unity; and the Association of Southeast Asian Nations.  Only one has decided to move beyond its natural, subscribed limits, citing security and a militant basis, for its actions.

On April 27, the UK Foreign Secretary Liz Truss, prime ministerial contender, made her claim that the North Atlantic Treaty Organization needed to be globalised.  Her Mansion House speech at the Lord Mayor’s Easter Banquet was one of those unusually frank disclosures that abandons pretence revealing, in its place, a disturbing reality.

After making it clear that NATO’s “open door policy” was “sacrosanct”, Truss also saw security in global terms, another way of promoting a broader commitment to international mischief.  She rejected “the false choice between Euro-Atlantic security and Indo-Pacific security.  In the modern world we need both.”  A “global NATO” was needed.  “By that I don’t mean extending the membership to those from other regions.  I mean that NATO must have a global outlook, ready to tackle global threats.”

The Truss vision is a simple one, marked by nations “free” and “assertive and in the ascendant.  Where freedom and democracy are strengthened through a network of economic and security partnerships.”  A “Network of Liberty” would be required to protect such a world, one that would essentially bypass the UN Security Council and institutions that “have been bent out of shape so far” in enabling rather than containing “aggression”.

This extraordinary, aggressive embrace of neoconservative bullishness, one that trashes international institutions rather than strengthening them, was on show again in Spain.  At NATO’s summit, Truss reiterated her view that the alliance should take “a global outlook protecting Indo-Pacific as well as Euro-Atlantic security”.

The Truss position suggested less a remaking than a return to traditional, thuggish politics dressed up as objective, enduring rules.  Free trade, that great oxymoron of governments, is seen as “fair”, which requires “playing by the rules.”  The makers of those rules are never mentioned.  But she finds room to be critical of powers “naïve about the geopolitical power of economics”, a remarkable suggestion coming from a nation responsible for the illegal export of opium to China in the nineteenth century and promoters of unequal treaties.  “We are showing,” he boasted, “that economic access is no longer a given.  It has to be earned.”

The Global NATO theme is not sparklingly novel, even if the Ukraine War has given impetus to its promotion and selling.  The post-Cold War period left the alliance floundering.  The great Satan – the Soviet Union – has ceased to exist, undercutting its raison d’être.  New terrain, and theatres, were needed to flex muscle and show purpose.

The Kosovo intervention in 1999, evangelised as a human rights security operation against genocidal Serbian forces, put the world on notice where alliance members might be going.  NATO was again involved in enforcing the no-fly zone over Libya as the country was ushered to imminent, post-Qaddafi collapse.  When the International Security Force (ISAF) completed its ill-fated mission in Afghanistan in 2015, NATO was again on the scene.

In the organisation’s Strategic Concept document released at the end of June, the Euro-Atlantic dimension, certainly regarding the Ukraine conflict and Russia’s role, comes in for special mention. But room, and disapproval, is also made for China.  “The People’s Republic of China’s (PRC) stated ambitions and coercive policies challenge our interests, security and values.”

A number of “political, economic and military tools” had been used to increase Beijing’s “global footprint and project power”, all done in a manner distinctly not transparent.  The security of allies had been challenged by “malicious hybrid and cyber operations”, along with “confrontational rhetoric and disinformation”.  Of deep concern was the deepening relationship between Moscow and Beijing, “and their mutually reinforcing attempts to undercut the rules-based international order” which ran “counter to our values and interests.”

The alliance’s recent self-inflation has led to curious developments.  Australia’s Prime Minister Anthony Albanese has been pushing Canberra ever closer towards NATO, a process that has been ongoing for some years.  At the alliance’s public forum in Madrid, Albanese used China’s “economic coercion” against Australia as a noisy platform while decrying Beijing’s encroachments into areas that had been the playground, and in some cases plaything, of Western powers.  “Just as Russia seeks to recreate a Russian or Soviet empire, the Chinese government is seeking friends, whether it be […] through economic support to build up alliances to undermine what has historically been the Western alliance in places like the Indo-Pacific.”

At a press conference held at Madrid’s Torrejon Air Base, the Australian prime minister felt certain that “NATO members know that China is more forward leaning in our region.”  Beijing had levelled sanctions not only against Canberra but had proven to “be more aggressive in its stance in the world”.

Australian pundits on the security circuit are warmed by the visit, seeing a chance to point NATO’s interest in the direction of China’s ambition in the Indo-Pacific.  Just as Norwegian historian Geir Lundestad described Washington’s Cold War involvement in Western Europe as an empire by invitation, NATO, or some bit of it, is being envisaged as an invitee in regions far beyond its traditional scope.  None of this will do much to encourage the prospects for stability while leaving every chance for further conflict.

we already have globalized monkeys with digital anus So F OFF Urubus M F !!!!

NATO is already recognised as the center of global TERRORISM, led by the devil-duo US&UK, global indeed.

I got a strong feeling that the blonde bitch will be chosen as the monster head of britz regime knowing its long standing history of racism having a competitor of different race. The woman named Liz Truss is a sign of an ominous warning to our planet. May she got blessed with monkey pox soon.

An open revelation that NATO’s existence is not to defend the members but to control and dominate the world. Evil intent seeing all the others as their preys.

NATO is an OFFENSIVE force just check the number of countries it INVADES— GCHQ- give it a rest stop making me post on EDIT.

and Canada is their mouldy Bed LINEN!

Nato is so weak and lesbian terrorist that is Over Kaput !!!

Yes nato has many weak points. The akiles heel is that once the head of the snake is removed the rest of it will be of no consequence. Take the head off in one clean sweep and all is well

North Atlantic –were is the Atlantic in the East ? All the USA wants are its servants to obey it –bark laptop poodles — “woofety -wooof ” – now bark at Russia -English poodle – woo–ooof ! -good dog – Eu French poodle -bark at China — Woooo-ooof ! -good dog – now Australia- woooo–oooof ! Slaves of the USA in action.

evrything North of jupiter is atlantic !!! and nato is lgbt terrorist pedos !!!

Has SouthFront got a RUTUBE channel yet?

So according to ya nigha, Europe was all friendly hugs and kisses between each other before this?

Gospel According to G.W. Bush and Barack Obama under the auspices of the Patriot Act(s) and the NDAA Section(s) 1021 and 1022.

OK we are all terrorists !! So F uk the usa and the gay parazites !!! GW Brosh and Obambu should married and make an abortion !!!

I sure wish Russian Federation and PRC had called it 10 years ago, by announcing their departure from the UN “Ca$in0”?!…

“it may be dangerous to be our enemy but it is fatal to be our ally”. Henry Kissinger

The Axis Of Evil—china russia iran—has been put on notice.

Bye bye Colombia. Another matter, you are going to pay all the indemnities for Covid-19.

“as one digs deeper into the national character of amerikans one sees they have sought the value of everything in this world according to the answer to a single question: how much money will it bring in?” tocqueville

amerikan morality=money prostitution ugliness…”the people of north America accept a level of ugliness in their daily lives nearly without precedent in the history of western civilization”. Yuri Bezmenov

Soon enough, bye bye Brazil as well 🤷🏻‍♂️ from Mexico DF to Tierra del Fuego South Patagonia, all anti-yankees and left socialist/communist governments and nations. Can’t fix that with color robolutions or regime-change, can you?

NATO is a joke, but the big laugh is to Davo’s dement plutocracy. Post scriptum, some, here, in SF comments, call all those dement and sinisters clowns by the word “khazars”.

Spreading terror and suffering to ALL parts of the globe…US?UK/NATO. This insidious axis of evil MUST be stopped! It sickens me to see this britbitch mouthing off condescendingly about “their” right to world dominance…it’s going to fuqueing STOP.

When you try to defend everything you defend nothing.

WHOM is defending Children through the revolving doors of Court Forced Satanic Transgendering of innocent Children in NATO Countries? What About a CHILD’s freedom?

Most of the US Deep State (Nuland, Kagen, Veldman, etc.), are the spawn of Jewish Supremacist Trotskyites (google Yagoda Y net News Stalins Jews) that got kicked out of the Soviet Union for being too radical and crazy. They murdered 66 million in the Soviet Union.and they make the Court Forced Satanic Transgendering of innocent Children in NATO Countries

Even if we deny it, we cannot escape the Jewishness of “our hangmen,”

https://www.ynetnews.com/articles/0,7340,L-3342999,00.html We mustn’t forget that some of greatest murderers of modern times were Jewish.

All these things are well-known to some extent or another, even though the former Soviet Union’s archives have not yet been fully opened to the public. But who knows about this? Within Russia itself, very few people have been brought to justice for their crimes in the NKVD’s and KGB’s service. The Russian public discourse today completely ignores the question of “How could it have happened to us?”

And us, the Jews? An Israeli student finishes high school without ever hearing the name “Genrikh Yagoda,” the greatest Jewish murderer of the 20th Century, the GPU’s deputy commander and the founder and commander of the NKVD.

REPLYING TO”NATO GOING GLOBAL”,VEIWED FROM HERE IN THE A.U.:”When ☠️ DEATH is Calling On A Dog 🐶 it 🛑 Stops it From 🦐 Smelling The Scent Of The Shit it Loved 😍 To Eat!”.MORAL:US-Led EU/NATO, is About To Sign ☢️ it’s Thermo Nuclear 💀 Death Warrant!!. RFR’S CSTO AND CCP-PRC’S SHENGHEN NEO-AXIS TREATY PACT BRI/BRICS IS ALREADY READY!WILLING!!,ABLE TO GO ON WAR FOOTINGS!!!.But A Preemptive Nuclear STRIKE is To The Ultimate Advantage Of RFR,CCP And DPRK,Courtesy OF Hypersonic Missile And STATUS 6-POSEIDON AI-NULCEAR-TORPEDOES,AND THE SARMAT-SATAN,PLUS UP GRADED DEADHAND AI-NUCLEAR C3IO SO AMERICA,AND IT’S EMPIRE CAN BE AND WILL VERY SOON BE BLOWN TO HELL!!.By The Way The SHENGHEN TREATY PACT Nation’s Have 4:1,/10:1 🌎 EARTH🌍 REPOPULATION ADVANTAGE OVER THE COLLECTIVE WEST!!.

Truss said WHAT blasphemy? “Where freedom and democracy are strengthened through a network of economic and security partnerships.” I can’t believe western skulldugging MP’s can’t realize the entire WORLD knows everything ABOUT them now!

Stealing a product from a country for 25 Cents, then RESELLING it at home for $20 producing a profit of $19.75 which is used to criminally transgender children, and expose innocent children to DEPRAVITY in schools and being JAILED or Fined for speaking the Truth is WHAT? Freedom? for whome to do what to WHOM?

NATO = NO Action, Talk Only