It has happened again.  This time, a diligent worker, having followed all the protocols given to him, had returned a positive result for COVID-19.  The 26-year-old had been serving as a resident support officer in the Australian Open quarantine program in Melbourne, Victoria.  Yet for all that, he still could not avoid contracting the virus.  Not knowing so, he visited no less than 14 exposure sites, including various supermarkets and stores, before showing symptoms.

A discouraging pattern is emerging from Australia’s hotel quarantine system.  In January, 2.5 million residents across the Greater Brisbane area in the state of Queensland faced a short, sharp lockdown after a hotel quarantine worker tested positive for the virus.  “The cleaner did everything right,” claimed the Queensland Premier Annastacia Palaszczuk.

Western Australia followed suit, with its government imposing a five-day lockdown in the wake of a positive test for a hotel quarantine guard.  Known as Case 903, the guard in question tested positive to the UK variant of the virus, seemingly from a returned overseas traveller.  He had not interacted with the person in question, having been stationed two metres away from the room at the Four Points by Sheraton in Perth.  Paul Armstrong, state director of communicable disease control, revealed that security guards at quarantine hotels were not required to don personal protective equipment except in cases when guests would arrive or when the room door would open.

To add a troubling ingredient to this, a returned traveller in Victoria’s hotel quarantine tested positive to the British variant of the coronavirus on February 3.  The coronavirus detectives were wondering whether this might be connected to a family occupying another room.  CCTV footage does not reveal members of the family, or the individual in question, leaving their rooms at the same time to engage such menial tasks as putting out laundry or collecting food.  Interest has shifted to the possibility that the viral load in the family’s hotel room was of such a high order that particles found their way through the corridor once the door was opened.  Those particles, left in a poorly ventilated space, provided rich opportunities for infection.

The novel coronavirus beast is proving versatile, confounding its combatants.  It has caused a kerfuffle amongst authorities in the Australian state of Victoria, who are still keen to host an international tennis tournament at considerable risk.  Questions are being asked about emissions, facilities and equipment.  Cadres of health experts are worried.

The Victorian Premier Daniel Andrews acknowledged that the spread of the virus by means of aerosol transmission had to be taken seriously.  The Australian Health Principal Committee had “been dealing with some of these issues.  No doubt this will be a feature of the report that I will give to national cabinet tomorrow.”

The Emergency Services Minister Lisa Neville had to confess that yet another breach in the quarantine system had taken place, despite no deviation from set health protocols.  A change of tack was required.  She explained as much to radio station 3AW: “Things like in the health hotels, we use N95 masks when we’re moving infectious people, but we may need to do fitted masks, that could be one of the procedures that needs to change.”

Focus inevitably shifts to the nature of how staff involved in the quarantine procedures are protected.  Epidemiologist Mary-Louise McLaws, an advisor to the World Health Organization, insists that staff involved in the quarantine system wear additional protection in the form of face shields.  “With a highly infectious variant, we don’t yet know whether you are more likely to catch it through your eyes.”

The way the virus continues to leak through the quarantine barriers is getting some of the professionals hot under the collar.  “Why does this keep happening?” asked irritated epidemiologist Mike Toole of the Burnet Institute.  “The answer is that there is no national standard and a stubborn resistance to taking aerosol transmission seriously.”  An aspect of neglect lay in avoiding the deceptive way such transmission was taking place.  “We need a national standard drawn up by the Federal Government that all states and territories adhere to.”

Other suggestions are offered as to how such a standard could be reached.  Toole advocates throwing vast “resources at this problem.”  Greater care had to be paid to ventilation and Personal Protective Equipment.  “It’s our only defence because we won’t reach population immunity from vaccination this year.”

Aerosol transmission is the subject of a recent, yet to be peer-reviewed study from Bristol in the UK.  Healthy volunteers and hospitalised patients were recruited in the study to study aerosol emission, examining breathing, speaking and coughing.  “Coughing,” it was found, “was associated with the highest aerosol emissions with a peak concentration at least 10 times greater the mean concentration generated from speaking or breathing.”  Room ventilation, or the air exchange rate, was also a critical factor, with poorly ventilated spaces “posing a potential risk to those even not in close contact”.

Public health officials find themselves in a bind as to how best to contain those arriving from overseas.  Victoria’s Deputy Chief Health Officer, Allen Cheng, resorts to the stop gap approach.  An “engineering review” of the hotels had been undertaken.  Airborne transmission was recognised, posing greater concern given the arrival of new coronavirus variants.  The processes had to be tweaked and improved.  Health bureaucrats and administrators find themselves defending a doomed, leaking system.

The truth is that with the analysis of the samples at 40 and more cycles, anyone and anything is positive for Covid-19, as well demonstrated by Tanzania who sent papaya and goat samples to the analysis laboratories and they found them positive.

Do you understand how many more negative tests there are for every positive? You are talking 10- 30 /100000in most places and in the 100s / 100000 at the worst locations. I work with about 200 employees who get tested twice a week and we didn’t have a single case for 6 months, that’s 9600 tests in a row without a positive. The absolute maximum amount of false positives is irrelevant to the numbers, like >1% and usually the result of contamination not the test failing. You know what we do see pretty frequently though? People with all the symptoms testing negative again and again and again, maybe positive on the 3rd or 4th test and some not positive at all but it’s obviously covid, using multiple labs.

This is the case everywhere at least in the West, in fact in 2020 have disappeared the deaths from the most common causes, such as cardiac arrests, various tumors, lung problems, have made this scam to inflate the statistics and sell an otherwise non-existent pandemic, even the normal deaths caused from flu complications have disappeared, for the first time in thousands of years the flu has disappeared.

A Lie has no legs….Corona will open the eyes of a lot of Sheeple…that is a very positive thing about all these lockdowns & Shit….the Elites will bring themselves down…

“not one of them has answered a single one my questions”, they are scared.
They are scared to be exposed and lose money. Thats the deep pathetic side of it.
Its called wilful ignorance.
There is a lot of psychological experiences from WWII on how people react under threats and big pressure.

Last thing we need is more draconian enforcement, if the extreme actions we have taken for a whole year have failed so badly and yet the dreaded collapse of the medical system and bodies on the street never materialised then maybe we should just step back and consider if it’s all really worth the cost and effort.

When women are good they are really good. 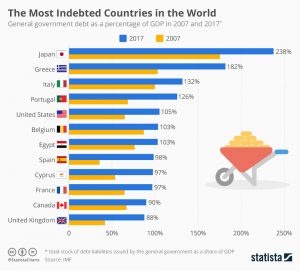 There is no way Japan has more debt then ZioAmerica, no way in hell.

You know statistic is always a lie. It only show a tendency maybe right maybe wrong.
I only use statistic as a puzzle piece.
But the story is West is technically bankrupt.

This is a giant psyops. There is no virus.